In recent years new migratory streams to the United States have developed outside the Central Highlands region, which has a migratory history dating back several generations. The Survey of Mexican migrants shows that the migrant streams from various Mexican states differ considerably in terms of their history and their destination.

For the sake of simplicity, the following analysis focuses on five Mexican states which together contributed 40 percent of the survey respondents and which represent well-established migrant streams (Jalisco and Michoacán) and newer streams (Puebla, Veracruz and the Distrito Federal, which comprises the Mexico City metropolitan area). As the figure below indicates, there are significant differences in the amount of time respondents from various states have spent in the United States. 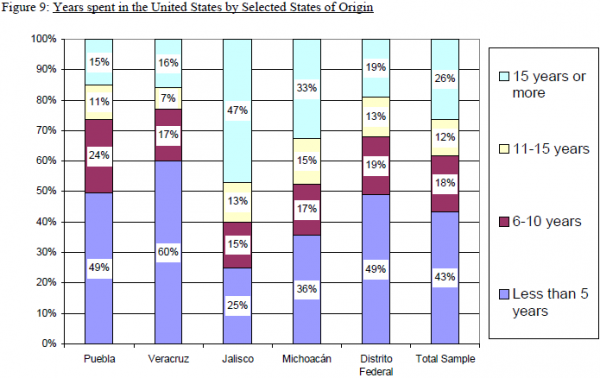 Destinations also differed by state of origin. Respondents from new sending states were more likely to be found in parts of the United States where migration from Mexico is a relatively recent phenomenon, such as New York City and Raleigh. Meanwhile, respondents from states with longstanding migration patterns are more likely to be found in places such as Los Angeles and Fresno that have been migrant destinations for many decades.