Substantial shares of respondents in the Survey of Mexican Migrants reported maintaining close ties to Mexico in a variety of ways, such as owning property there or sending remittances to family members.

A little more than a third (35%) of the respondents said they owned land, housing or a business in Mexico, but the share was much higher among men (43%) than women (24%). As well as gender, age was an important factor in determining which respondents owned property or a business in Mexico; the share saying they did so increased markedly among older respondents. Finally, the propensity of respondents to say they owned property increased along a steady gradient according to the income they earned in the United States. Respondents who earned $400 or more a week were more than twice as likely to say they owned property as those who earned $100 or less (52% vs. 20%). It is worth emphasizing that the survey question did not inquire about family holdings but specifically asked, “¿Es usted dueño de tierra, vivienda o negocio en México?” (Are you the owner of land, housing or a business in Mexico?) 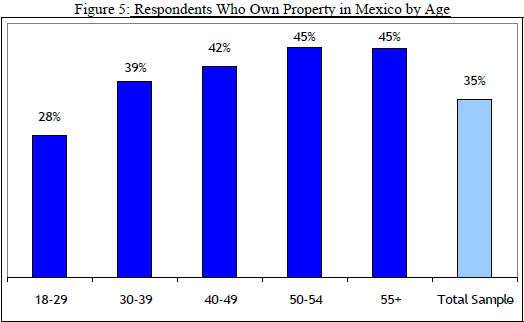 New forms of communication are also taking hold in this population. Asked how often they communicate with family in Mexico by email or another means involving a computer, 17 percent of the respondents said they do so regularly and an additional 18 percent said they do so sometimes. Not surprisingly, the computer users were concentrated among the younger and better educated respondents.

Civic organizations, sports teams or social clubs in the United States that bring together other Mexicans who share the same community of origin are a much less common way of maintaining ties to the homeland. Only 14 percent of respondents said they belonged to such groups.