The 2002 National Survey of Latinos contained a battery of questions designed to examine respondents’ experiences with health insurance and the health care system, including whether they had encountered problems in accessing or paying for medical care, or difficulty communicating with health care providers.

The survey found that almost three in four Latino adults are either themselves without health insurance or personally know someone who does not have insurance coverage. In addition, a substantial minority of Latinos reports health care challenges, such as problems paying medical bills, delays seeking care because of costs, and not getting needed health care services. Furthermore, some Latinos report having problems communicating with health care providers due to language barriers, or having difficulty getting care due to their race and ethnic background. 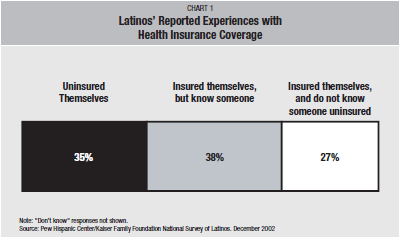 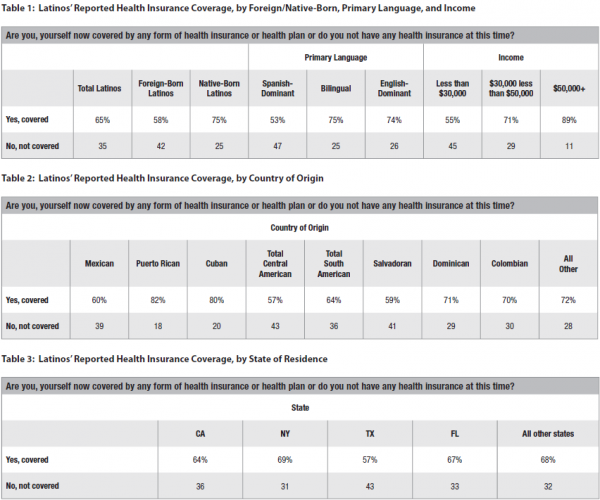 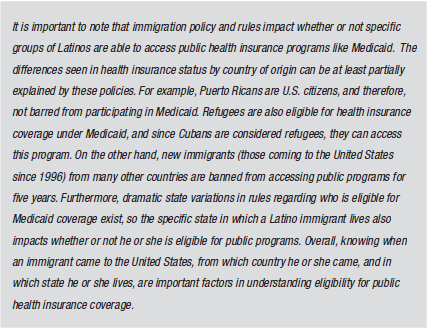 A substantial minority of Latinos reports additional challenges in paying for and gaining access to health care that they believe they need (see Table 4).

About one in seven (15%) Latinos says that they or another member of their household needed medical care, but did not get it during the past year, with almost seven in ten of this group saying the medical condition they needed care for, but did not get, was very (30%) or somewhat (38%) serious. In addition, one in fi ve (20%) Latinos says that in the past year, they or another member in their household postponed seeking medical care they felt they needed but couldn’t aff ord, with 44% of this group saying the person never got the care they needed. About one in fi ve (22%) Latinos reports that they have had problems paying medical bills in the past year, and of this group, about half (48%) say those bills had a major impact on themselves or their family. Together, 35% of Latinos say they or a member of their household experienced at least one of these three problems.

Latinos who are uninsured are more likely than Latinos who have health insurance to report having problems paying their medical bills (27% vs.19%), and having postponed seeking health care (27% vs.16%).

Some Latinos report having problems communicating with health care providers due to language barriers, or having difficulty getting care due to their race and ethnic background (see Tables 5 and 6). Not surprisingly, these experiences are more common among those who are Spanish dominant and among those who were born outside the United States.

Perhaps not surprisingly, half of those who are Spanish dominant report having had difficulty communicating with providers due to language barriers, compared to 8% of those who are English dominant. About four in ten of those born outside the United States also report having had such experiences. These Spanish-dominant and foreign-born groups are also more likely than their English-dominant counterparts to report having difficulty getting care. Puerto Ricans were less likely than those from other backgrounds to report experiencing these types of health care challenges.

Experiences with health care coverage, access to health care services, and communicating with health care providers vary substantially among different groups of Latinos. Those who are foreign born and those who mainly speak Spanish are more likely than their counterparts to report being uninsured, having problems communicating with health care providers, and having difficulty getting care due to their race and ethnic background. Moreover, a significantly greater number of Latinos with annual incomes of less than $30,000 say they are not covered by health insurance, compared to those earning more than $50,000 per year. Of all Latinos, about one third reported that they or another member of their household experienced at least one of the following problems during the past year: an unmet need for medical care, postponement of medical care due to cost, or problems paying medical bills. 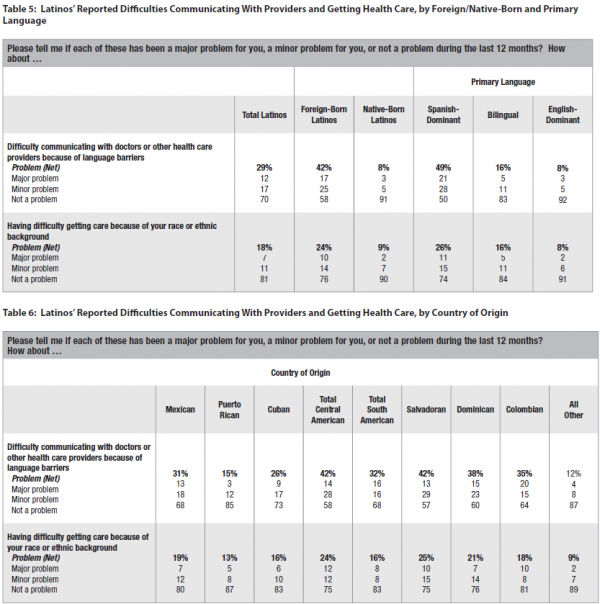 The sample design employed a highly stratified disproportionate RDD sample of the 48 contiguous states, including oversamples for Salvadorans, Dominicans, Colombians, and Cubans. The results are weighted to represent the actual distribution of adults throughout the United States. The Latino sample, in particular, was weighted to reflect the actual distribution among Latino adults of country of origin, age, sex, and region.

Of those who were interviewed, 2,929 identified themselves as being of Hispanic or Latin origin or descent (based on the question “Are you, yourself of Hispanic or Latin origin or descent, such as Mexican, Puerto Rican, Cuban, Dominican, Central or South American, Caribbean or some other Latin background?”). Throughout this report, they will be referred to interchangeably as either “Latinos” or “Hispanics.” In addition, interviews were conducted with 1,008 non- Hispanic whites and 171 non-Hispanic African Americans. The margin of sampling error is +/- 2.41 percentage points for Latinos overall. The sample sizes and margins of error for the different language groups are shown in the table below. The report also highlights results for other subgroups of Latinos.

Please see the introduction of the report for definitions, sample sizes, and margins of sampling error for these key groups. 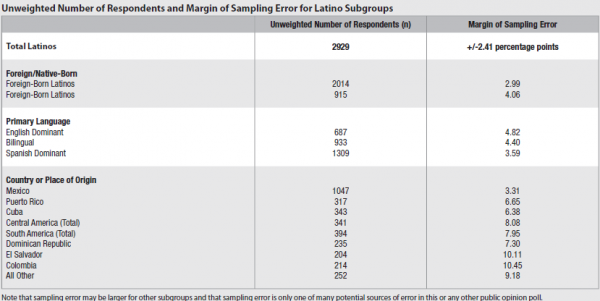