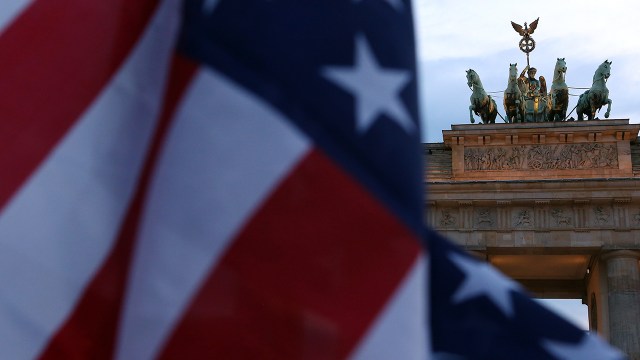 BERLIN, GERMANY – JULY 07: An American flag flies in front of the Brandenburg Gate, near the embassy of the United States of America, on July 7, 2014 in Berlin, Germany. A German employee of his country’s foreign-intelligence agency, known as the Bundesnachrichtendienst (BND), was arrested on suspicion of working as a double agent for the United States National Security Agency (NSA), a further blow to German-U.S. relations after suspicions that the latter agency had listened in on German Chancellor Angela Merkel’s mobile phone. Investigations into the exact extent of the American government’s surveillance in the country are ongoing. Reports from former U.S. intelligence employees have stated that U.S. embassies around the world have contained sophisticated eavesdropping equipment used to gather surveillance on their host countries for decades. (Photo by Adam Berry/Getty Images)

Americans and Germans Head Into 2021 With Divergent Opinions on Transatlantic Alliance
Americans see relationship with Germany in good standing, but more Germans now see it as bad
Americans view Germany as a partner on key issues, but Germans do not see the U.S. in the same light
Germans see poor relationship with U.S.; Americans see relations as good
Germans less likely than Americans to see other country as a partner on key issues
Democrats more likely than Republicans to see Germany as a partner on key issues
One-in-ten Americans see Germany as the most important foreign policy partner, but more Germans see U.S. as preeminent partner after presidential election
Democrats are as likely as Republicans to name Germany and China as most important partner, but Republicans keener on Israel than Democrats
Americans and Germans see bilateral relationship as more important than close relations with China
Younger Americans are more likely to prioritize relations with China over relations with Germany
Americans more likely to say conflict akin to the Cold War will occur between China and the U.S.
Americans and Germans prioritize bilateral relationship over Russian relationship
Germans more likely than Americans to say countries will cooperate more after coronavirus crisis ends
Unweighted sample size and the error attributable to sampling