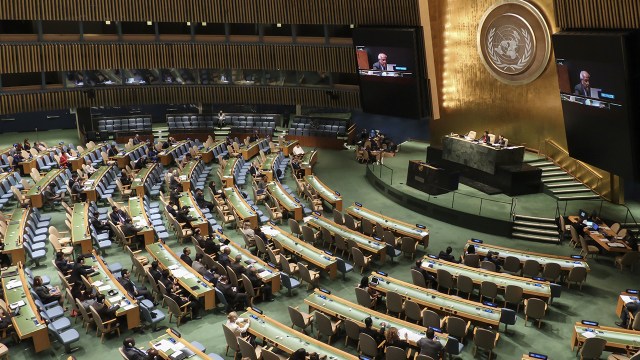 NEW YORK, NY – SEPTEMBER 10: Riyad Mansour the Palestinian representative to the UN speaks after the UN General Assembly adopted a resolution on September 10, 2015 that will allow the Palestinian flag to be raised at the world body’s headquarters in New York. (Photo by Bilgin S. Sasmaz/Anadolu Agency/Getty Images)

International Cooperation Welcomed Across 14 Advanced Economies
Strong public support for international cooperation and multilateral governance
UN is seen as a promoter of human rights and peace, but fewer say it deals effectively with international issues or cares about the needs of ordinary people
In countries surveyed, UN most often credited with promoting human rights, peace
Younger people more favorable toward UN, WHO’s handling of COVID-19 and international cooperation
Americans’ views of UN relatively stable
In the U.S., Democrats are much more likely than Republicans to support international cooperation, the UN and the WHO’s coronavirus response
Democrats and Republicans in U.S. differ on UN favorability
Over half of Japanese have unfavorable view of UN, a massive shift from last year
Japanese are skeptical of the WHO, UN and international cooperation in general
Most Germans say the UN promotes peace and human rights, less confidence it cares about ordinary people
There is widespread willingness to cooperate with other countries, even if it means compromising
Right-wing populist party supporters more likely to favor their country following its own interests
Those with more education tend to express stronger support for international cooperation
Prevailing view is that greater international cooperation would have reduced COVID-19’s impact
Younger people more likely to think international cooperation would have reduced domestic cases of COVID-19
Before COVID-19, clear majorities preferred a world in which countries cooperate rather than compete
Those on the ideological left favor acting as part of a global community
Favorable views of the UN widespread
Favorable views of the UN stable in most countries
Younger adults are more positive toward the UN than those 50 and older
People who want to take into account the interests of other countries in foreign policy more favorable toward UN
World Health Organization’s handling of COVID-19 gets positive marks in most countries polled
Women express greater praise for WHO’s handling of outbreak than men
In countries surveyed, UN most often credited with promoting human rights, peace
Democrats significantly more likely than Republicans to say the UN advances the interests of the U.S. and promotes action on global issues, including coronavirus
South Koreans have least faith in UN’s promotion of economic development
Majorities in most countries surveyed agree the UN effectively tackles infectious diseases and climate change, with notable exceptions
In many countries, people are split on whether the UN is effective on international issues
Those with more education more likely to say UN promotes human rights
Americans most divided ideologically on whether the UN advances the interests of countries like theirs
European populist party classifications