This analysis focuses on cross-national views of how governments have handled the coronavirus outbreak in 14 advanced economies, as well as the pandemic’s effect on daily life and civic unity. Though Pew Research Center has published extensively on the coronavirus outbreak over the past months, this survey is the first that expands analysis to more than just the U.S. experience of the outbreak. This study was conducted only in countries where nationally representative telephone surveys are feasible. Due to the coronavirus outbreak, face-to-face interviewing is not currently possible in many parts of the world.

Countries’ approaches to combat the spread of the coronavirus have varied throughout Europe, North America, Australia, Japan and South Korea, but most publics in these regions believe their own country has done a good job of dealing with the outbreak, according to a new Pew Research Center survey of 14 advanced economies. Overall, a median of 73% across the nations say their country has done a good job of handling novel coronavirus, which has reached nearly every corner of the globe, infected more than 20 million people worldwide and resulted in the deaths of several hundred thousand. 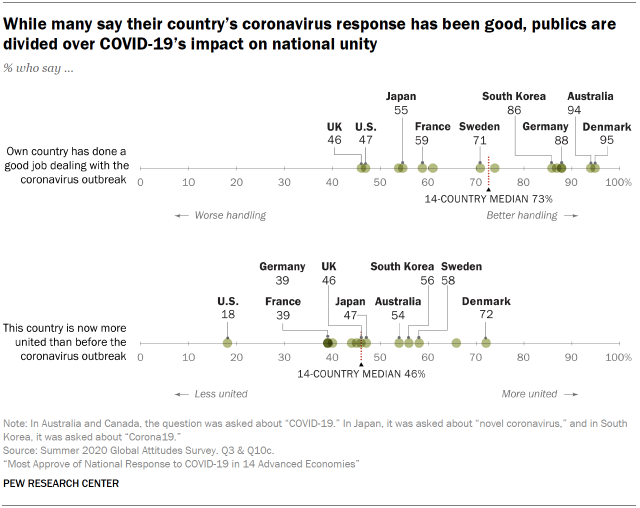 But the pandemic has had a divisive effect on a sense of national unity in many of the countries surveyed: A median of 46% feel more national unity now than before the coronavirus outbreak, while 48% think divisions have grown. This includes 77% of Americans who say they are further divided than prior to the pandemic, while just 18% believe the country to be more united.

In addition, a median of 58% say that their lives have changed a great deal or fair amount due to COVID-19. Women in particular have felt the effects of the virus most acutely.

And in a quarantine period marked with critiques of actors ranging from China to the United States to the World Health Organization, a median of 59% believe more international cooperation would have reduced the number of coronavirus cases facing their country. Young people in many nations are especially likely to hold this viewpoint.

These are among the findings of a new Pew Research Center survey, conducted June 10 to Aug. 3, 2020, among 14,276 adults in 14 countries: the United States, Canada, Belgium, Denmark, France, Germany, Italy, the Netherlands, Spain, Sweden, the United Kingdom, Australia, Japan and South Korea. The survey also finds that public attitudes toward their own country’s dealing with the coronavirus epidemic and national unity are linked to feelings of trust in others and economic confidence in their nation.

Across the 14 countries surveyed, a median of 73% say that their own country has done a good job dealing with the coronavirus outbreak. Just 27% believe their country has handled it poorly. However, there is some variation by country on this assessment.

About seven-in-ten or more give their nation’s coronavirus response a positive review in Denmark, Australia, Canada, Germany, the Netherlands, South Korea, Italy and Sweden. And more than half in Belgium, France, Japan and Spain share this sentiment.

In two countries – the United Kingdom and the United States – people are divided in their beliefs when it comes to rating their government’s performance responding to the coronavirus. These two nations also have high levels of political polarization on views of the government’s handling of this crisis. In the U.S., 76% of Republicans and independents who lean to the Republican Party say the government has done a good job, while just a quarter of Democrats and Democratic leaners agree, a 51 percentage point difference. A majority of right-leaning Britons (55%) give a positive rating to their country’s handling of the pandemic, led by Prime Minister Boris Johnson’s Conservative government, but just 26% on the left hold the same opinion.

People in Spain, which is currently led by the left-leaning Spanish Socialist Workers’ Party, are also split ideologically on assessing their government’s response to COVID-19, but in the opposite direction: 73% on the left are pleased with how their country has managed the outbreak while 40% on right are not, a 33-point difference. Those on the left are also more positive on their country’s response to the outbreak than those on the right by double digits in Italy (18 points more positive), Sweden (17 points) and South Korea (15 points).

Economies around the world have contracted due to the unprecedented nature of the coronavirus outbreak, and the U.S. Congressional Research Service reports that the global economy could grow between 3% and 6% less in 2020 compared with previous projections. These economic effects also relate to how people assess their own nation’s handling of the pandemic. Across all 14 nations included in the survey, those who think their current national economic situation is good are also more likely than those who believe the economy is bad to say their country has done a good job of dealing with the coronavirus outbreak.

This divergence is especially pronounced in the United States. Among those with a more optimistic view of the economy, 78% report that they approve of the way the U.S. government has dealt with the virus. But those who think the American economy is currently in poor shape are less than half as likely to give the government response a positive rating.

Coronavirus has changed many lives throughout 14 nations

Each of the countries in the survey have suffered the effects of the coronavirus. The number of deaths vary in the 14 countries from about 100 to more than 100,000 when the survey was fielded, and some nations completely locked down while others like Sweden, Japan and the U.S. used different measures to attempt to stave off the virus. Across the 14 countries surveyed, a median of 58% say the pandemic has changed their life either a great deal or fair amount, while 42% report not too much change or none at all.

About two-thirds or more in South Korea, Sweden, the U.S., the UK, Japan and Canada say their lives have changed at least a fair amount due to the pandemic. (In all of these countries except the UK, the government never imposed a national-level lockdown.) And at least three-in-ten in South Korea, the U.S., Sweden and the UK say their lives have changed a great deal since the outbreak began. Majorities of people in Spain and Italy – two early hotspots – have also noted changes in their lives because of the outbreak.

In six countries, about half or more say that their lives have not changed much or at all since the onset of the virus, including 54% of the Dutch, 53% of Australians, 53% of the French and 51% of Belgians. In each of these six nations except Australia, governments did put in place national-level lockdowns to counter the spread of COVID-19.

In 12 of the 14 countries surveyed, women are more likely than men to say their lives have changed due to the coronavirus. In nine of those countries, the gender gap reaches double digits – including in Sweden, the U.S. and France, where women were more likely to say this by 15 points each.

The changes that women have experienced during the pandemic could take many forms, and data underscores that women’s burdens have increased both at work and at home. Women around the world typically do more unpaid work at home than their male counterparts, such as child care and housework, and this may be amplified by closure of schools and day care centers to combat the spread of COVID-19. Additionally, according to the Organization for Economic Cooperation and Development, a higher share of women than men in each of the surveyed countries participate in part-time employment, which is more likely to have been interrupted by the pandemic. And a report from Citi asserts that coronavirus-related job losses have disproportionately affected women globally.

(Previous Center research from March also showed American women were more likely than their male counterparts to say their personal life had changed in a major way due to the virus.)

Little consensus on whether the pandemic has brought people together

In the U.S., where a patchwork of coronavirus-related restrictions reflects broad disagreement over the best path to economic recovery while mitigating the spread of the virus, roughly three-quarters say that the U.S. is more divided than before the coronavirus outbreak. Only about two-in-ten Americans say that the country has become more united. Though Americans of all ideological tilts say the country has become more divided, Democrats and Democratic-leaning independents (81%) are more likely than Republicans and Republican leaners (74%) to say division has increased. 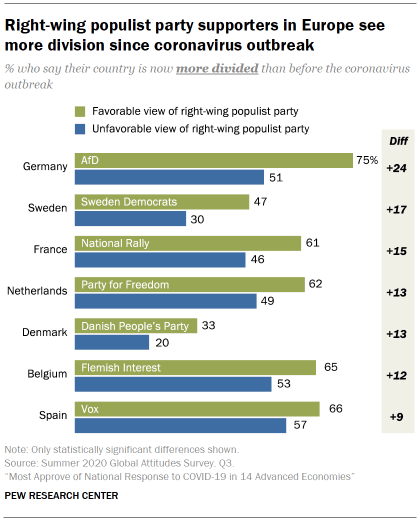 In Europe, those who have favorable opinions of right-wing populist parties are more likely than those with unfavorable views to say division has grown since the coronavirus outbreak began. This is especially true in Germany, where thousands have gathered to protest coronavirus restrictions in recent weeks, including some protestors affiliated with the far right. Fully 75% of Germans with a favorable opinion of the right-wing Alternative for Germany (AfD) party say Germany is now more divided than before the coronavirus outbreak, compared with 51% of those with an unfavorable view of AfD.

Other countries that have seen similar protests against prolonged lockdowns, including the Netherlands and Spain, also show gaps between those with favorable and unfavorable views of right-wing populist parties in their country.

Missed opportunities for cooperation to reduce coronavirus cases are felt especially strongly in Europe, where failure to coordinate the initial response led to sudden and severe outbreaks in Northern Italy and Spain. More than half in seven of the nine European countries surveyed say that more cooperation would have reduced coronavirus cases.

Much as younger people globally tend to have more favorable opinions of the UN and younger Americans give higher approval ratings to the WHO for its handling of the coronavirus outbreak, those ages 18 to 29 are more likely than those 50 and older to say that more cooperation would have reduced the number of coronavirus cases in their country.

In Australia, for example, the difference between younger and older respondents on the question of international cooperation on the pandemic exceeds 30 percentage points. While 61% of Australians ages 18 to 29 say more cooperation would have helped reduce the number of coronavirus cases, only about a quarter of Australians 50 and older say the same. 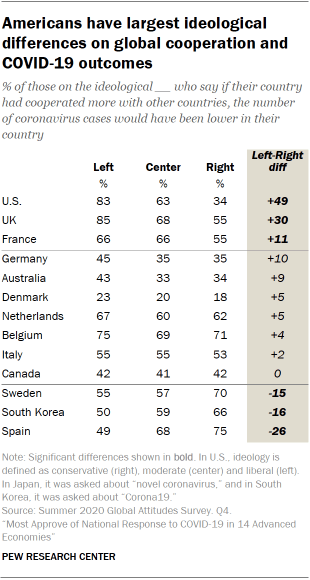 Whether people think more cooperation could have helped stop the spread of the coronavirus relates with whether they align with the ruling party’s ideology.

In the U.S. and the UK, where right-leaning parties currently hold national executive power, those on the left are more likely to say that more cooperation would have reduced the number of coronavirus cases. Those on the right are more skeptical of the effectiveness of international cooperation.

On the other hand, the left-wing Spanish Socialist Worker’s Party currently holds power in Spain and Spaniards on the ideological right are more likely than those on the left to say their government could have limited coronavirus cases by cooperating more with other countries. And in South Korea and Sweden, where the governments are technically led by left-leaning coalitions, a similar pattern follows.

Most Approve of National Response to COVID-19 in 14 Advanced Economies
Most people think their own country has done well handling pandemic responseCoronavirus has changed many lives throughout 14 nationsLittle consensus on whether the pandemic has brought people togetherPublics generally agree that more international cooperation would have potentially reduced virus-related fatalities
Acknowledgments Methodology Appendix A: Classifying European political parties