Majorities of publics in top migrant destination countries say immigrants strengthen their countries, according to a 2018 Pew Research Center survey of 18 countries that host half of the world’s migrants.

In 10 of the countries surveyed, majorities view immigrants as a strength rather than a burden. Among them are some of the largest migrant receiving countries in the world: the United States, Germany, the United Kingdom, France, Canada and Australia (each hosting more than 7 million immigrants in 2017).

By contrast, majorities in five countries surveyed – Hungary, Greece, South Africa, Russia and Israel – see immigrants as a burden to their countries. With the exception of Russia, these countries each have fewer than 5 million immigrants.

Meanwhile, public opinion on the impact of immigrants is divided in the Netherlands. In Italy and Poland, more say immigrants are a burden, while substantial shares in these countries do not lean one way or the other (31% and 20% respectively).

Countries surveyed hold half of the world’s migrants

The 18 nations surveyed contain more than half (51%) of the world’s migrant population, or some 127 million people, according to United Nations and U.S. Census Bureau estimates.

Countries with some of the world’s largest immigrant populations were surveyed, including more traditional destinations like the United States, Canada and Australia that have seen waves of immigrants arrive since at least the 19th century. Also surveyed were more recent destination countries in the European Union such as Germany, the United Kingdom, France, Spain, Italy, the Netherlands, Sweden and Greece, all of which experienced immigration waves after World War II.

Japan and Israel were also surveyed. Japan is making efforts to attract more migrants due to its aging population. Israel has been a destination for immigrants since it enacted its 1950 Law of Return for Jewish people worldwide. Russia was surveyed since it has one of the world’s largest foreign-born populations. At the same time, South Africa continues to be a top destination country for many Africans.

Also included in the survey were some newer destinations. Mexico, for example, has become an increasingly important destination and transit country for migrants fleeing violence from El Salvador, Guatemala and Honduras. Similarly, Hungary became an important transit country for migrants entering Europe during the refugee surge that peaked in 2015. And although Poland for many years was a country of emigration, it has seen a recent wave of immigrants from Eastern Europe.

Saudi Arabia and the United Arab Emirates are top immigrant destinations that were not surveyed. Pew Research Center does not have a history of conducting surveys in these countries.

Meanwhile, in six European Union countries surveyed, public opinion about the impact of immigrants has changed since 2014. That was the last time the Center asked European publics this question. It was also before hundreds of thousands of asylum seekers arrived on Europe’s shores in 2015. In Greece, Germany and Italy, three countries that experienced high volumes of arrivals, the share of adults saying immigrants make their countries stronger dropped significantly.

By contrast, public opinion shifted in the opposite direction in France, the UK and Spain, countries surveyed that received fewer asylum seekers in 2015. In all three countries in 2018, majorities said immigrants made their countries stronger, up from about half who said the same in 2014.1

Japan is an outlier: A large majority of the public (75%) says immigrants want to adopt the country’s customs and way of life. This country, whose aging population and low birth rate make immigration relevant for its population growth, has recently changed its policies to attract more foreigners. Views about immigrant integration in Japan could be linked to the low number of immigrants the country hosts and that many immigrants in Japan are ethnically Japanese.

By contrast, in eight destination countries – Hungary, Russia, Greece, Italy, Germany, Poland, Israel and Australia – more people say immigrants want to be distinct than say they are willing to adopt the host country’s customs. Majorities hold this view in Hungary, Russia, Greece, Italy and Germany. In addition, sizable shares of people in most of these countries refused to choose one option or the other when asked this question.

In many countries surveyed, younger adults, those with higher levels of education and those on the left of the political spectrum are generally more likely to say immigrants are adopting the country’s customs and way of life (see Appendix B for group breakdowns).

In the Netherlands, Japan, Israel and Germany, opinions are split on the impact of immigrants on crime. In four other countries where views were mixed, substantial shares refused to choose either of the two statements offered – Italy (26%), Hungary (17%), Poland (15%) and Russia (14%).

Publics across top migrant destination countries are split on whether or not immigrants increase the risk of terrorism in their countries.

In six countries, majorities believe immigrants do not increase the risk of terrorism in the host country. These include all surveyed countries in North America (Mexico, Canada and the U.S.), as well as South Africa and Japan. Publics in France and Spain, two European countries that were not at the center of the 2015 refugee crisis, also hold this view.

By contrast, majorities in seven European nations – Hungary, Greece, Italy, Sweden, Russia, Germany and the Netherlands – believe immigrants increase the risk of terrorism in their countries.

Majorities in most immigrant destination countries surveyed support the deportation of people who are in their countries illegally.

In seven of the 10 EU countries surveyed, majorities support the deportation of immigrants living in their country illegally. In 2007, between 1.7 million and 3.2 million unauthorized, or irregular, migrants were estimated to be living in the 10 EU countries surveyed. The number of asylum seeker applications has increased following the 2015 refugee surge. Since then, the number of rejected asylum applications has increased substantially. Many of these rejected asylum seekers may continue to reside illegally in Europe. 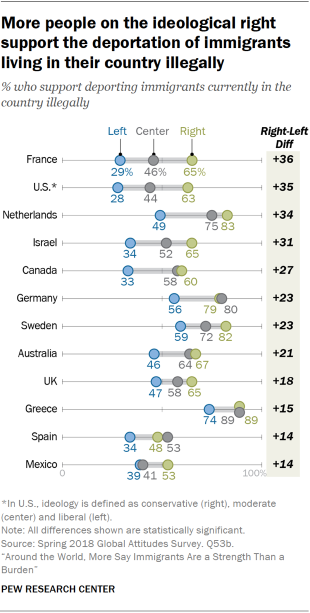 In the U.S., public opinion is divided on the issue. About half (46%) of the public supports deporting immigrants residing there illegally, while the other half (47%) opposes their deportation.2 The Center estimates 10.7 million unauthorized immigrants lived in the U.S. in 2016, which represented less than a quarter (23.7%) of the U.S. immigrant population. The number of unauthorized immigrants in the U.S. has been falling since 2007 and is now at levels last seen in 2004.

In Mexico, fewer than half (43%) say they support the deportation of immigrants living there illegally. In recent years, Mexico has experienced an increasing number of migrants entering the country without authorization from Guatemala, Honduras and El Salvador. Mexico has historically been a migrant-sending country: About 12 million people born in Mexico live outside the country, nearly all in the U.S. Among those in the U.S., nearly half are unauthorized immigrants.

Immigrants are foreign-born individuals living outside their country of birth, regardless of their citizenship. Refugees and asylum seekers are a subgroup within this broader population. The terms “immigrants” and “migrants” are used interchangeably in this report.

The terms “asylum seekers,” “asylum applicants” and “refugees”  are used interchangeably throughout this report and refer to individuals who have applied for asylum. Seeking asylum does not mean applicants will necessarily be permitted to stay in the country where they have submitted an application.

Around the World, More Say Immigrants Are a Strength Than a Burden
Publics split on immigrants’ willingness to adopt their societies’ customs and way of lifePublics are less concerned about immigrant crime than the risk they pose for terrorismMajorities in many countries think immigrants in the country illegally should be deported
Acknowledgments Methodology Appendix A: References Appendix B: Demographic tables