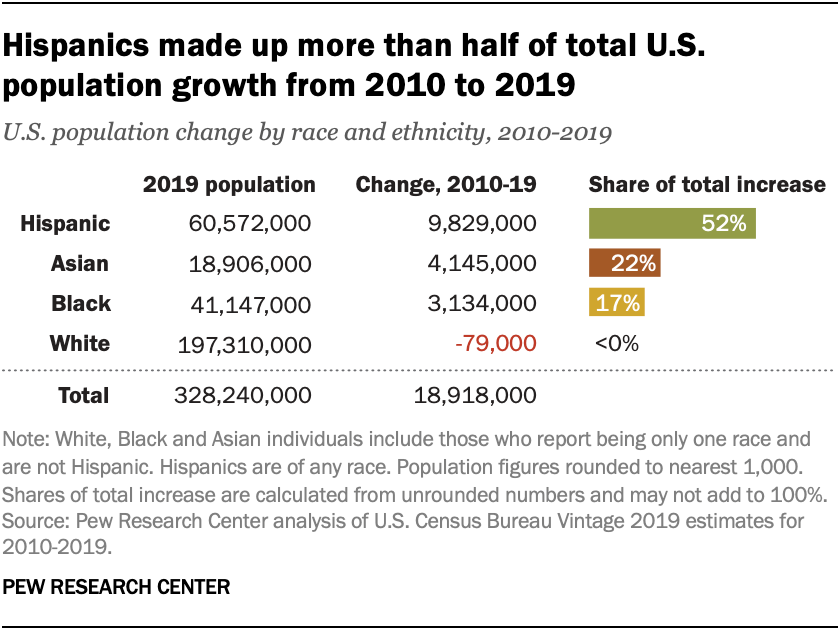 Hispanics have played a significant role in driving U.S. population growth over the past decade, though the group is not growing as quickly as it once did. From 2010 to 2019, the U.S. population increased by 18.9 million, and Hispanics accounted for more than half (52%) of this growth, according to a Pew Research Center analysis of new U.S. Census Bureau population estimates, the last before 2020 census figures are released.

In 2019, the number of Hispanics reached a record 60.6 million, making up 18% of the U.S. population. This is up from 50.7 million in 2010, when Hispanics were 16% of the population. The number of Hispanics is growing more slowly than it previously did, due to a decline in the annual number of births to Hispanic women and a drop in immigration, particularly from Mexico. From 2015 to 2019, the Hispanic population grew by an average of 1.9% per year, down significantly from a peak of 4.8% from 1995 to 2000.

As part of our ongoing research of Hispanics in the United States, we examined population changes over the past decade of racial and ethnic groups in the U.S., the 50 states and the District of Columbia. The analysis is based on data from the U.S. Census Bureau’s Vintage 2019 population estimates for 2010-2019. These are the last population estimates before the 2020 census.

In four states – Illinois, Connecticut, West Virginia and Vermont – the Latino population increased from 2010 to 2019, even though the overall state population declined during this time. The decreases happened almost entirely among the white populations of these states (both Black and white populations declined in Illinois).

In 21 other states, Hispanics accounted for more than 50% of statewide population increases from 2010 to 2019. In six of these states – New York, New Jersey, Pennsylvania, New Mexico, Rhode Island and Mississippi – Latino population growth exceeded that of the overall population during this time, again largely due to declines among the white population.

Half of U.S. Hispanics live in Southwest border states, but fastest population growth is elsewhere

Some of the nation’s largest Hispanic populations are in the four states that border Mexico – California, Texas, Arizona and New Mexico. In fact, the two states with the most Hispanics, California (15.6 million) and Texas (11.5 million), alone account for 45% of the nation’s Hispanic population. Together, the four border states were home to 50% of U.S. Hispanics in 2019. 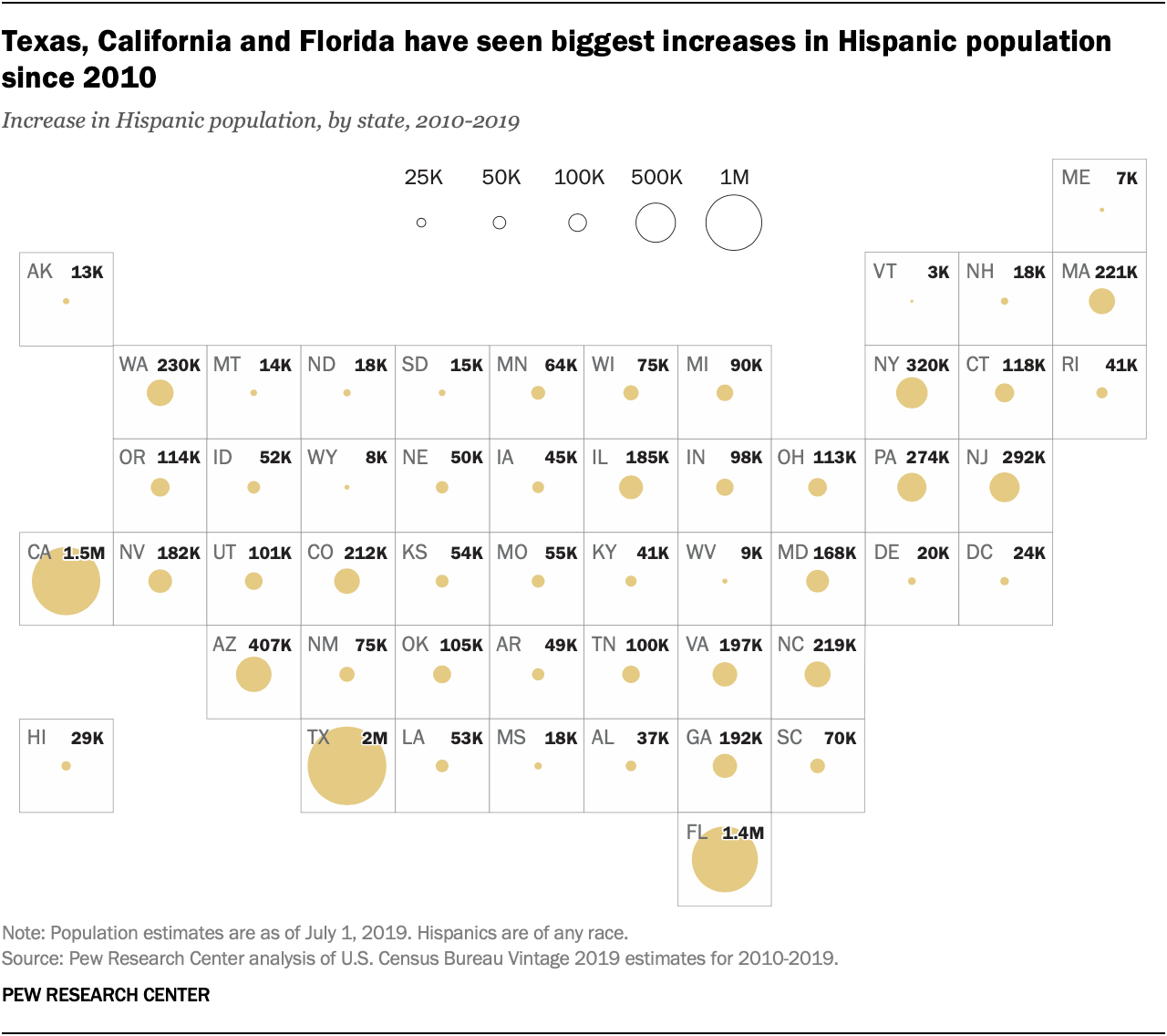 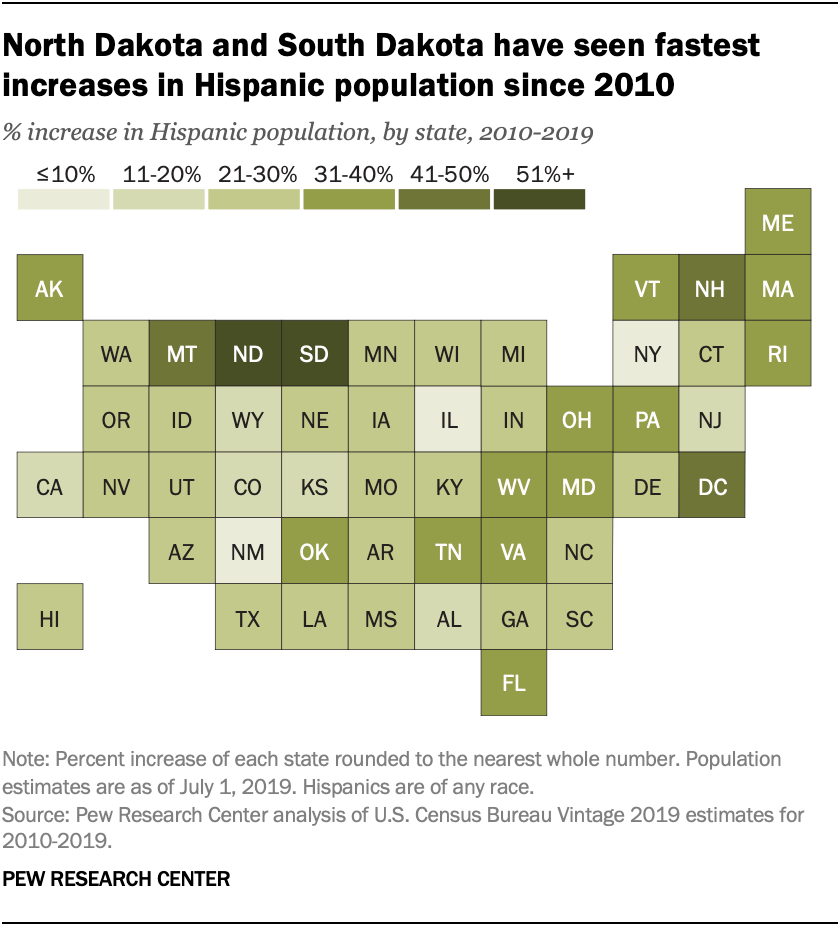 The median age of U.S. Hispanics is 30. The four states with the highest median ages also have some of the nation’s largest Hispanic populations: Florida (36 years), New York (33), New Mexico (33) and New Jersey (32). The two most populated Hispanic states, California and Texas, have median ages of 30 and 29, respectively.

Among the 12 states with more than 1 million Hispanics, North Carolina (25 years), Georgia (27), Pennsylvania (28) and Arizona (28) have the lowest median ages.

The two youngest states by median age, South Dakota (23) and North Dakota (24), have among the smallest Hispanic populations in the country. Each has fewer than 40,000 Hispanics. 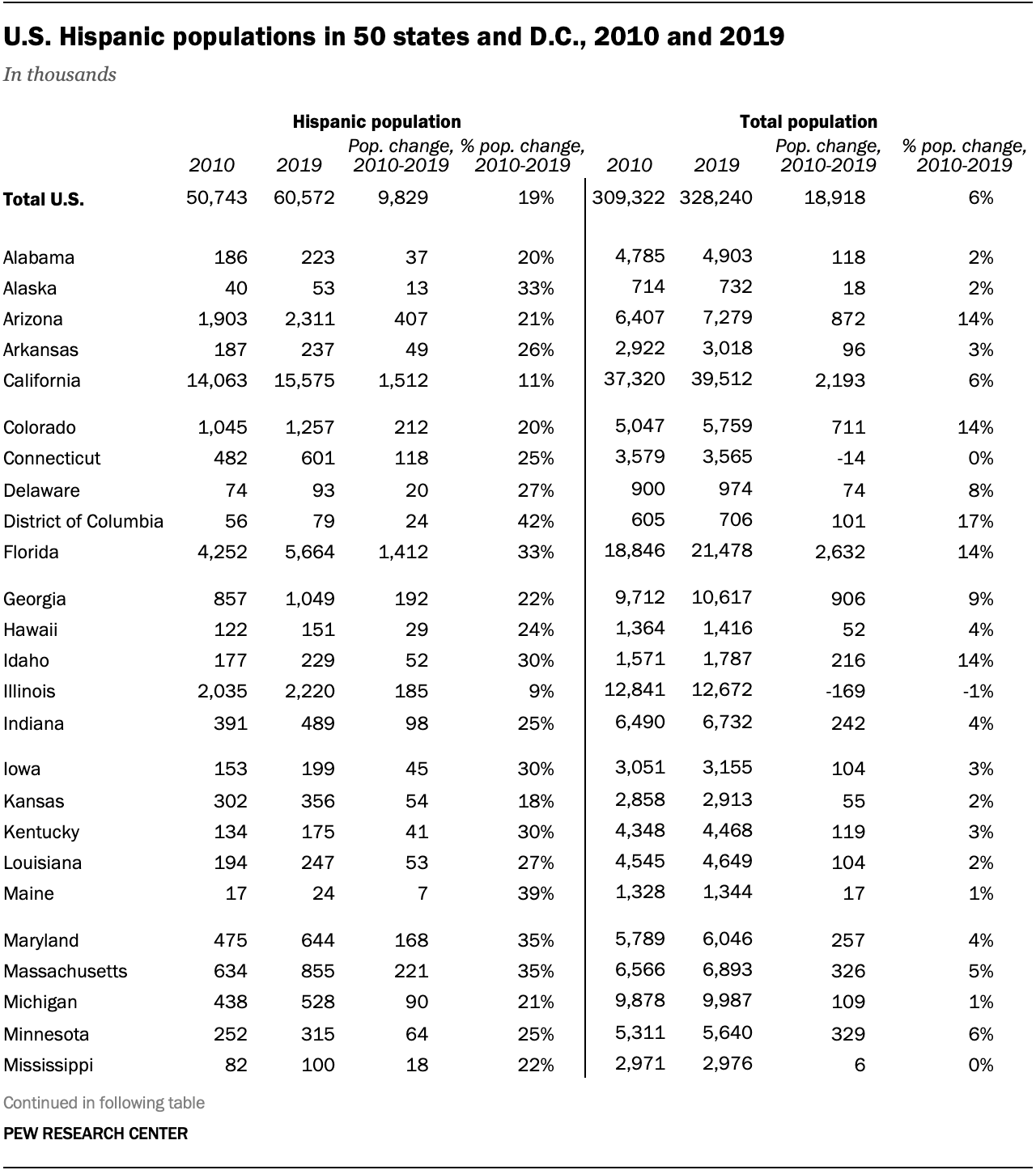 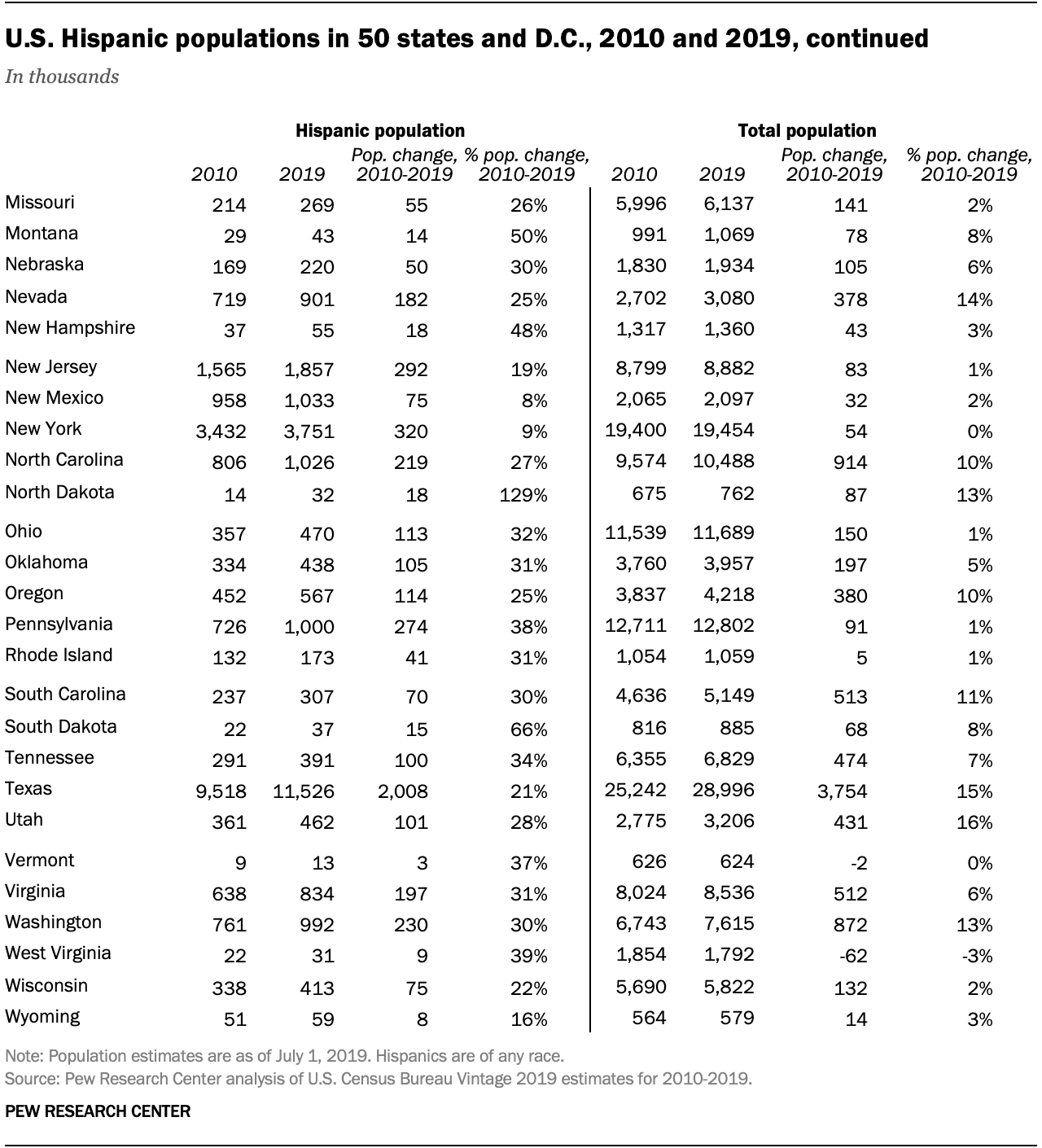