The extent to which the official rate may understate the actual state of unemployment is greater for women, Asian Americans, immigrants and workers without a bachelor’s degree, according to a new Pew Research Center analysis of government data. For several groups of workers, the unemployment rate likely was 20% or higher in May, up to 5 percentage points greater than reported.

The COVID-19 recession, barely three months old, has had a sharp and severe impact on unemployment among American workers. The coronavirus outbreak has also affected data collection efforts by the U.S. government, potentially understating the true extent of unemployment. This analysis describes how the underestimation of unemployment varied among major demographic groups of workers.

The unemployment rate is the number of jobless workers actively seeking work as a share of workers either at work or actively seeking work. In April and May 2020, there was a sharp rise in workers classified as being “employed but absent from work for other reasons.” Many of these workers should have been counted as “unemployed on temporary layoff,” according to the U.S. government.

The COVID-19 outbreak has also led to about a 10 percentage point decrease in the response rate for the CPS in March and April 2020 and an even greater decrease in May 2020. It is possible that some measures of unemployment and its demographic composition are affected by these changes in data collection. 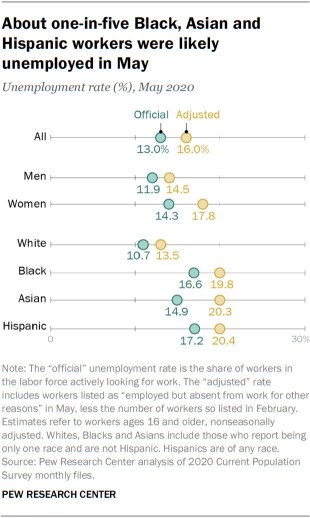 Among racial and ethnic groups, the unemployment rate for Asian workers may have been as high as 20.3% in May. That would have put them on par with Black (19.8%) and Hispanic (20.4%) workers, compared with an adjusted rate of 13.5% for white workers. Notably, the unemployment rate among Asian workers in February was only 2.5%, significantly less than the rate for Hispanic (4.8%) and Black (6.2%) workers. 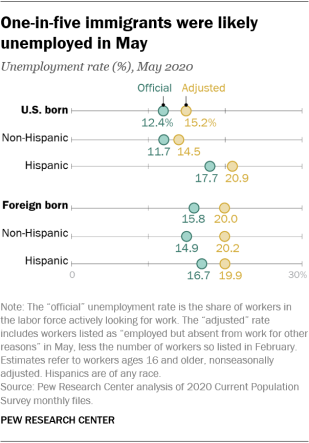 The experience of Asian workers in the COVID-19 recession stands in contrast to their experience in the Great Recession, when their unemployment rate peaked at a level well below the rates for Black and Hispanic workers. In the current downturn, job losses have been concentrated in the leisure and hospitality sector. While this sector accounted for 11% of total nonfarm employment in February, it accounted for 35% of the total loss in jobs from February to May. Asian, Black and Hispanic workers were about equally likely to be employed in this sector prior to the COVID-19 outbreak. 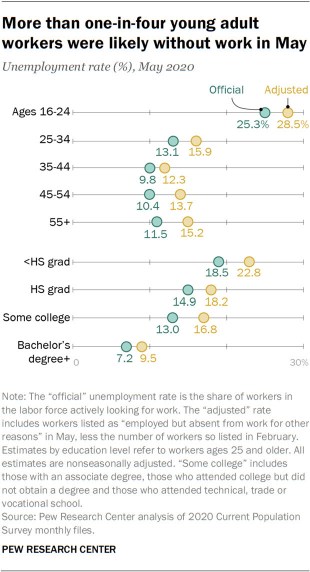 Correcting for the measurement error causes a relatively sharp rise in the unemployment rate for workers without a high school diploma, from 18.5% to 22.8% in May. Also, nearly one-in-five workers (18.2%) with a high school diploma only and 16.8% of workers with some college education were likely unemployed in May. Only workers with a bachelor’s degree or higher education maintained an unemployment rate in the single digits (9.5%) following the correction for the misclassification.