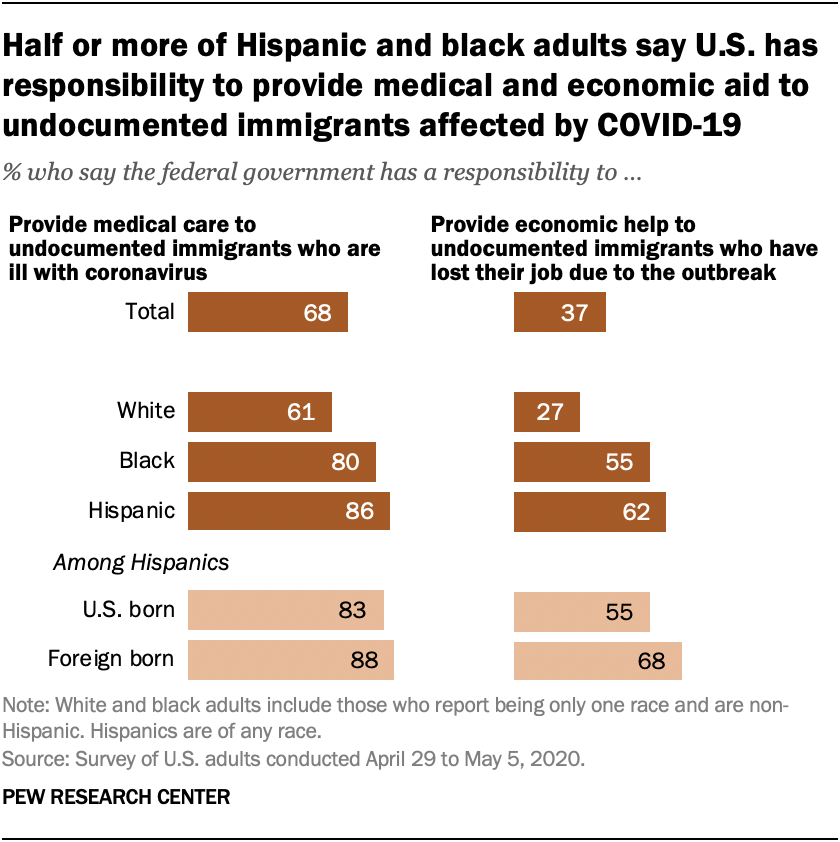 About two-thirds of U.S. adults (68%) say the federal government has a responsibility to provide medical care to undocumented immigrants who are ill with the coronavirus, even as relatively few (37%) say the government should offer economic help to undocumented immigrants who have lost their job due to the outbreak, according to a Pew Research Center survey conducted April 29 to May 5. Views on these questions vary widely by race and ethnicity, partisan identification and other characteristics.

Hispanics are the most supportive of the federal government providing medical and economic support to undocumented immigrants affected by the coronavirus outbreak. The vast majority of Hispanics (86%) say the government has a responsibility to provide medical care, and around six-in-ten (62%) say the same about economic help. Hispanic immigrants are more likely than U.S.-born Hispanics (68% vs. 55%) to support federal economic help for undocumented immigrants affected by the outbreak, but views between the two groups are more similar when it comes to medical care (88% vs. 83%).

To examine the public’s attitudes toward medical and economic assistance for undocumented immigrants affected by COVID-19, we surveyed 10,957 U.S. adults from April 29 to May 5, 2020. Everyone who took part is a member of Pew Research Center’s American Trends Panel (ATP), an online survey panel that is recruited through national, random sampling of residential addresses. This way nearly all U.S. adults have a chance of selection. The survey is weighted to be representative of the U.S. adult population by gender, race, ethnicity, partisan affiliation, education and other categories. Read more about the ATP’s methodology. Here are the questions used for this report, along with responses, and its methodology.

A little over a tenth of the nation’s 60 million Latinos are undocumented (or unauthorized) immigrants (7.6 million). In a December survey, 45% of U.S. Latino adults said they personally know someone who is in the country illegally. The same survey found that 44% of Latinos said they worry a lot or some that they themselves, a family member or close friend could be deported.

Regardless of legal status, significant shares of immigrants in the United States hold service, construction and other jobs that are at risk during the coronavirus outbreak because they are difficult to perform remotely.

In an April survey, about half of Americans (52%) correctly said undocumented immigrants did not receive economic benefits from the congressional relief bill, while 40% said they weren’t sure and 7% incorrectly said the bill did provide benefits for this group.

A second relief package recently proposed in the U.S. House includes some provisions for undocumented immigrant workers, such as temporary protection from deportation for those in industries deemed essential. At the state level, California extended economic relief to undocumented immigrants. About 2 million of the nation’s 10.5 million unauthorized immigrants lived in California alone as of 2017, the most of any state.

Differences by education and partisan identification 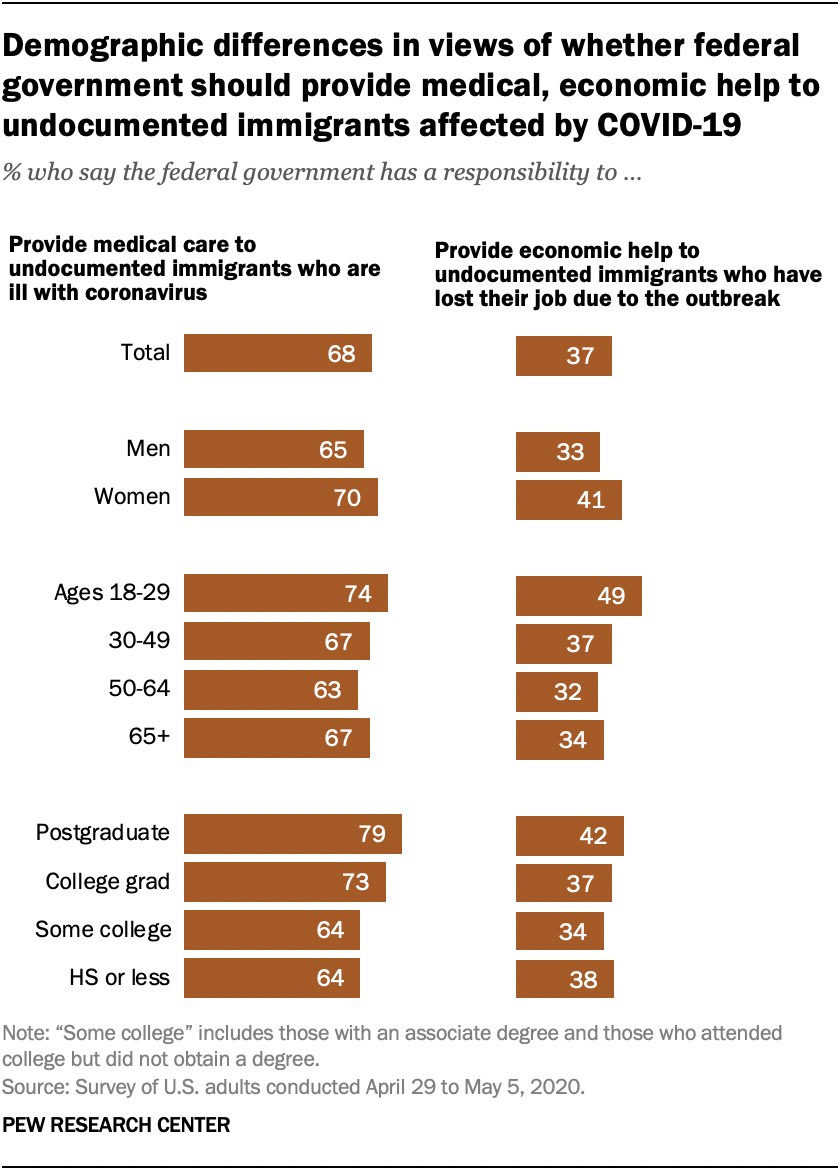 Americans with higher levels of educational attainment are more likely to say the U.S. has a responsibility to provide medical aid to undocumented immigrants who are ill with the coronavirus. About three-quarters of adults with a postgraduate degree (79%) or a bachelor’s degree (73%) say this, compared with about two-thirds among those with some college experience and those with a high school diploma or less (each 64%).

Across education levels, smaller shares say the federal government has a responsibility to provide economic help to undocumented immigrants who have lost a job. Around four-in-ten or fewer say this across all educational groups. 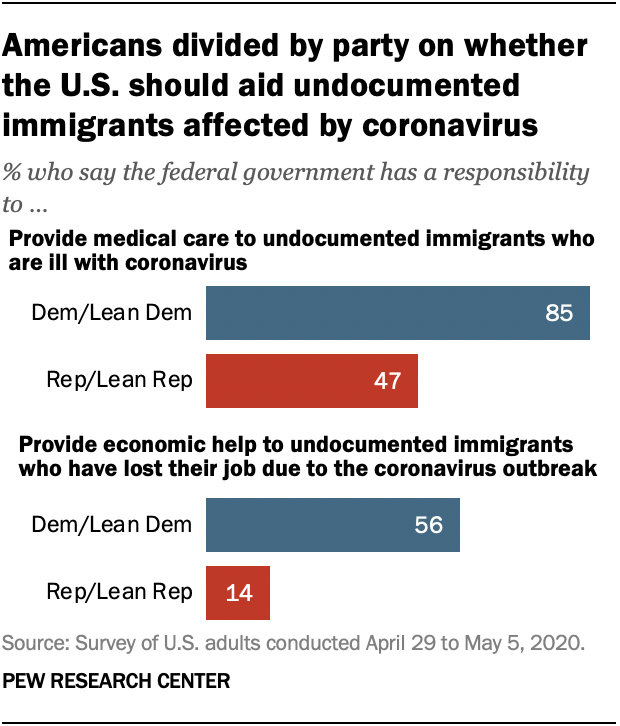 Democrats and Republicans hold sharply different views on the federal government’s role in helping undocumented immigrants affected by the coronavirus. The vast majority (85%) of Democrats and Democratic-leaning independents say the federal government has a responsibility to provide medical care to undocumented immigrants, compared with about half of Republicans and Republican leaners (47%).