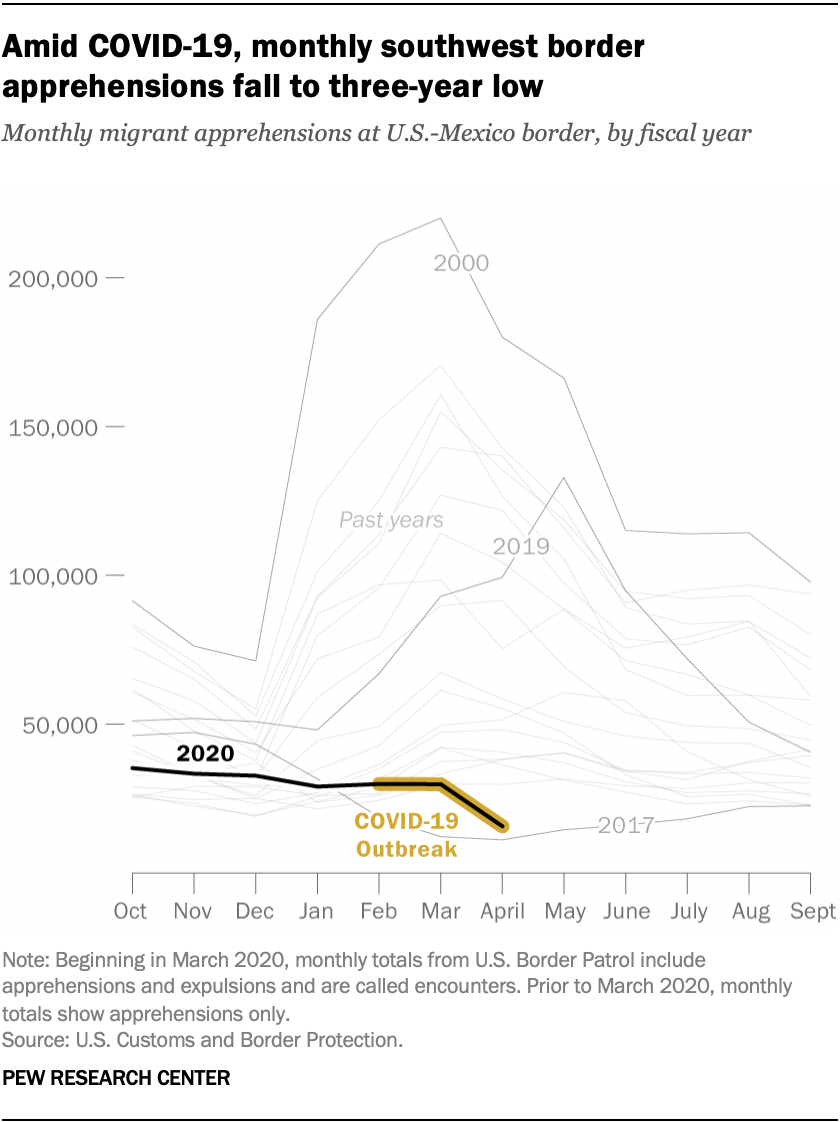 The number of migrants apprehended at the U.S.-Mexico border dropped sharply in April, the first full month after the U.S. government declared a national emergency due to the novel coronavirus outbreak and closed the border to all but essential traffic.

U.S. Border Patrol agents expelled or apprehended 15,862 migrants at the southwest border in April, down 47% from March, the largest percentage decline in enforcement actions in a single month since at least 2000, according to new federal data. In addition, apprehensions in April were down 84% compared with the same month in 2019, when the total was 99,273. The last time border enforcement actions in a single month had fallen below the 20,000 mark was in 2017.

The decrease in apprehensions comes as the movement of migrants in the Americas and worldwide has slowed during the COVID-19 outbreak, with governments fully or partially closing their borders to stem its spread.

As the COVID-19 outbreak has led governments worldwide to restrict movement across their borders, we wanted to explore how these changes are reflected in migration at the U.S.-Mexico border. Since March, U.S., Mexican and Central American governments moved to limit movement within their territories and across their borders. At the same time, President Trump has cited public health concerns when implementing immigration policy changes that affect immigrants arriving at the U.S.-Mexico border.

This analysis uses recently released U.S. Customs and Border Protection Border Patrol data to examine how immigrant apprehensions at the U.S.-Mexico border have changed during the COVID-19 outbreak and differ from previous years. U.S. border migrant apprehensions data is commonly used as an indicator of how many people are entering the U.S. illegally, though it is only a partial measure. Starting in March 2020, apprehensions data reported by CBP includes both apprehensions and expulsions. Expulsions refer to migrants encountered by U.S. Border Patrol who are expelled to the country of last transit or home country.

In March, Mexico restricted nonessential travel across its border with the U.S., while the governments of El Salvador, Guatemala and Honduras essentially closed their borders to all traffic. Most migrants apprehended at the U.S.-Mexico border in recent years have come from Mexico and Central American nations. 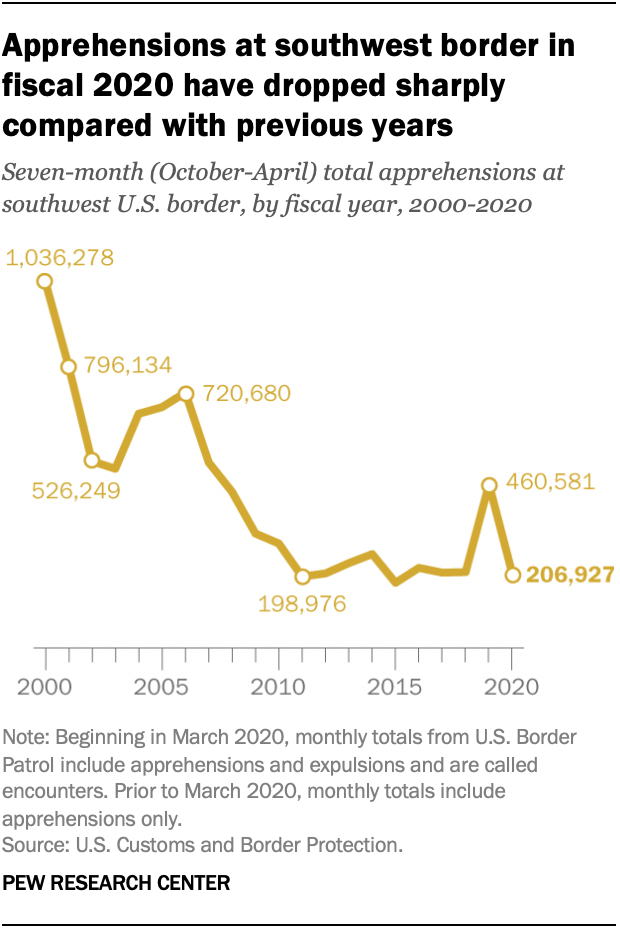 There have also been changes in U.S. border policy. Citing the pandemic, the Trump administration issued an order in March allowing Border Patrol agents to swiftly expel migrants they consider health risks to their home country or their last transit country. In April, the first full month since the new order, these expulsions accounted for 91% of the Border Patrol’s total apprehensions at the southwest border. The order covers asylum seekers and unaccompanied children, two groups that have made up a large share of border apprehensions in recent years. Since then, the number of people allowed to stay in the U.S. after seeking humanitarian protection has dropped to almost zero.

Even before the coronavirus outbreak, the number of apprehensions at the U.S.-Mexico border was on the decline. In the first seven months of fiscal 2020 (October 2019-April 2020), the number was down 253,654 (or 55%) compared with the same period in fiscal 2019. Only 2002 saw a larger drop in the number of apprehensions through the first seven months of the fiscal year compared with the previous year.

The decline in apprehensions occurred across the U.S.-Mexico border in April. All nine U.S. Border Patrol sectors saw decreases in migrant apprehensions compared with March. The largest declines happened in the Rio Grande sector – where apprehensions fell from 7,027 to 3,264 – and the El Paso sector, where they fell from 4,221 to 1,699. 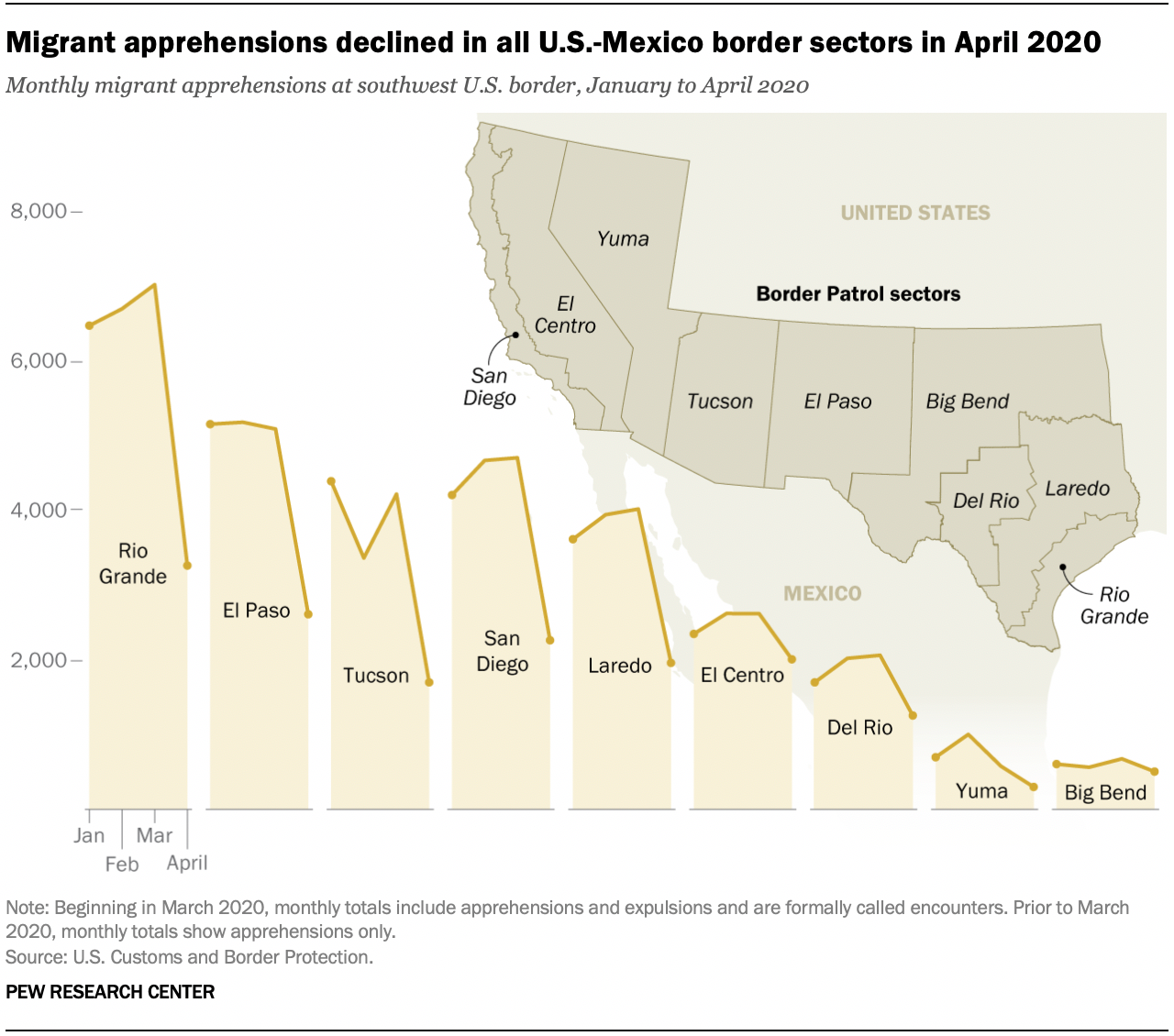 Profile of migrants encountered at the border has changed 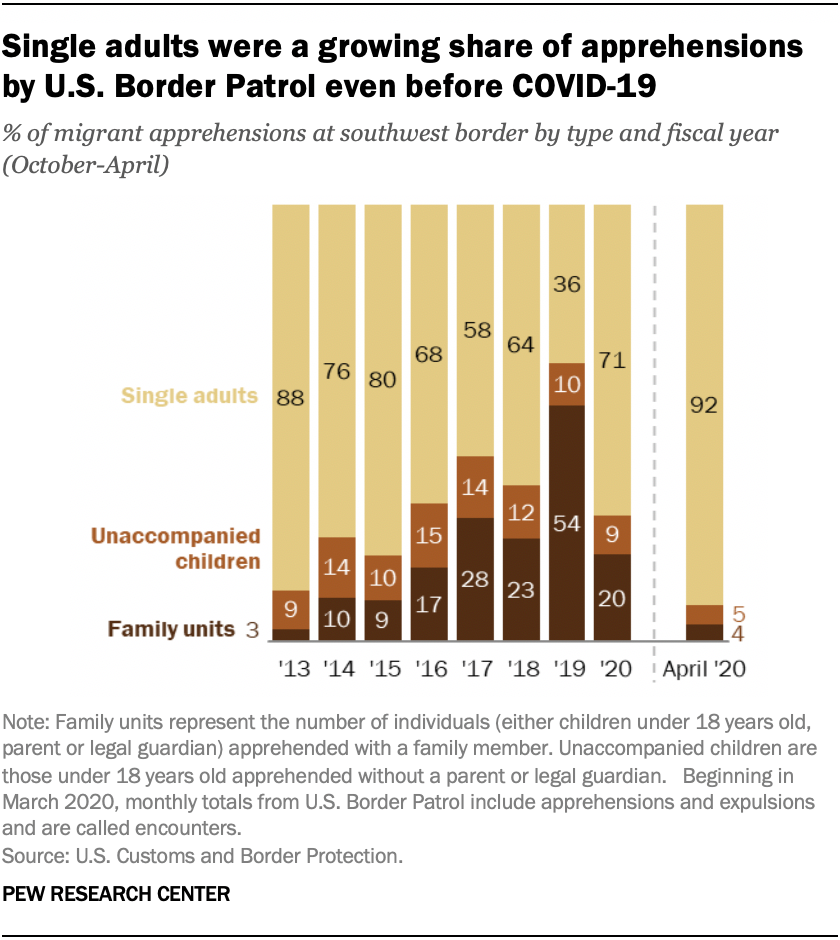 Single adults accounted for 92% of migrants apprehended at the southwest border in April, while families (also called “family units”) and unaccompanied minors each accounted for less than 5%. This marked an acceleration of changes that were already underway before the coronavirus outbreak. In the first five months of fiscal 2020 (October-February), 68% of apprehensions were single adults, 9% were unaccompanied children and 23% were family units.

The origin countries of migrants apprehended at the U.S.-Mexico border have shifted, too. In April, migrants from Mexico accounted for 69% of the total number of apprehensions, a higher share than this fiscal year’s average and a departure from recent trends.

But here too, changes in the origins of apprehended migrants were already underway. Mexicans accounted for 53% of apprehensions in the first seven months of fiscal 2020, followed by migrants from Guatemala (16%), Honduras (12%) and El Salvador (5%). These shares are considerably different from the full 2019 fiscal year, when these three Central American nations together made up 71% of the total – the third consecutive year they accounted for more than half of southwest border apprehensions. 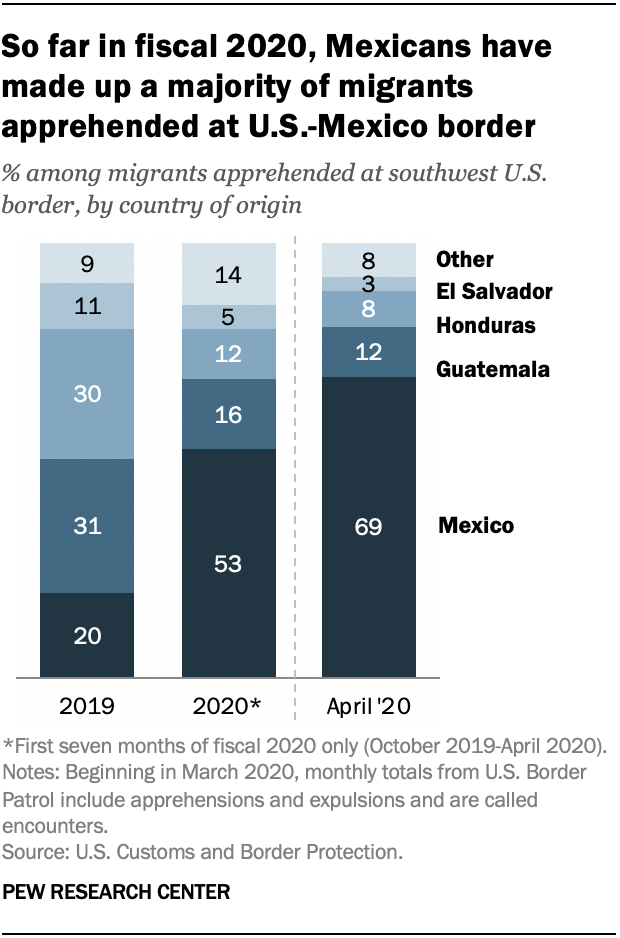 What’s happening at the U.S.-Mexico border in 5 charts
Border apprehensions increased in 2018 – especially for migrant families
Apprehensions of migrants at U.S.-Mexico border rose sharply in October and November
Many Mexican child migrants caught multiple times at border
How border apprehensions, ICE arrests and deportations have changed under Trump
U.S. Image Plummets Internationally as Most Say Country Has Handled Coronavirus Badly
Quiz: Where do you fit in the political typology?
Support for Black Lives Matter has decreased since June but remains strong among Black Americans
The 2020 Trump-Biden matchup
Defining generations: Where Millennials end and Generation Z begins