This analysis focuses on internet, social media and mobile phone use in 34 countries. Internet and technology use are key components of the annual Global Attitudes Survey and is a core research area at Pew Research Center.

For this post, we used data from a Pew Research Center survey conducted across 34 countries from May 13 to Oct. 2, 2019, totaling 38,426 respondents. Data on internet and mobile phone usage for the United States is from a Center survey of 1,502 respondents conducted Jan. 8 to Feb. 7, 2019.

The surveys were conducted face-to-face across Africa, Latin America and the Middle East, and by phone in the U.S. and Canada. In the Asia-Pacific region, face-to-face surveys were conducted in India, Indonesia and the Philippines, while phone surveys were administered in Australia, Japan and South Korea. Across Europe, the survey was conducted over the phone in France, Germany, the Netherlands, Spain, Sweden and the UK, but face-to-face in Central and Eastern Europe, Greece, Italy, Ukraine and Russia. Respondents in each country were provided examples of smartphones; see this country-specific table for more. Similarly, examples were provided for social media sites.

For the purpose of comparing educational groups across countries, we standardize education levels based on the UN’s International Standard Classification of Education. The lower education category is below secondary education and the higher category is secondary or above in Brazil, India, Indonesia, Kenya, Lebanon, Mexico, Nigeria, Philippines, South Africa, Tunisia, Turkey and Ukraine. The lower education category is secondary education or below and the higher category is postsecondary or above in Argentina, Australia, Canada, Czech Republic, France, Germany, Greece, Hungary, Israel, Italy, Japan, Lithuania, Netherlands, Poland, Russia, Slovakia, South Korea, Spain, Sweden, UK and U.S.

For this report we grouped countries into two economic categories: “advanced” and “emerging and developing.” Details on how these categories were determined can be found here.

Here are the questions used for this report, along with responses, and its methodology. U.S. smartphone and internet data was drawn from a separate list of questions. 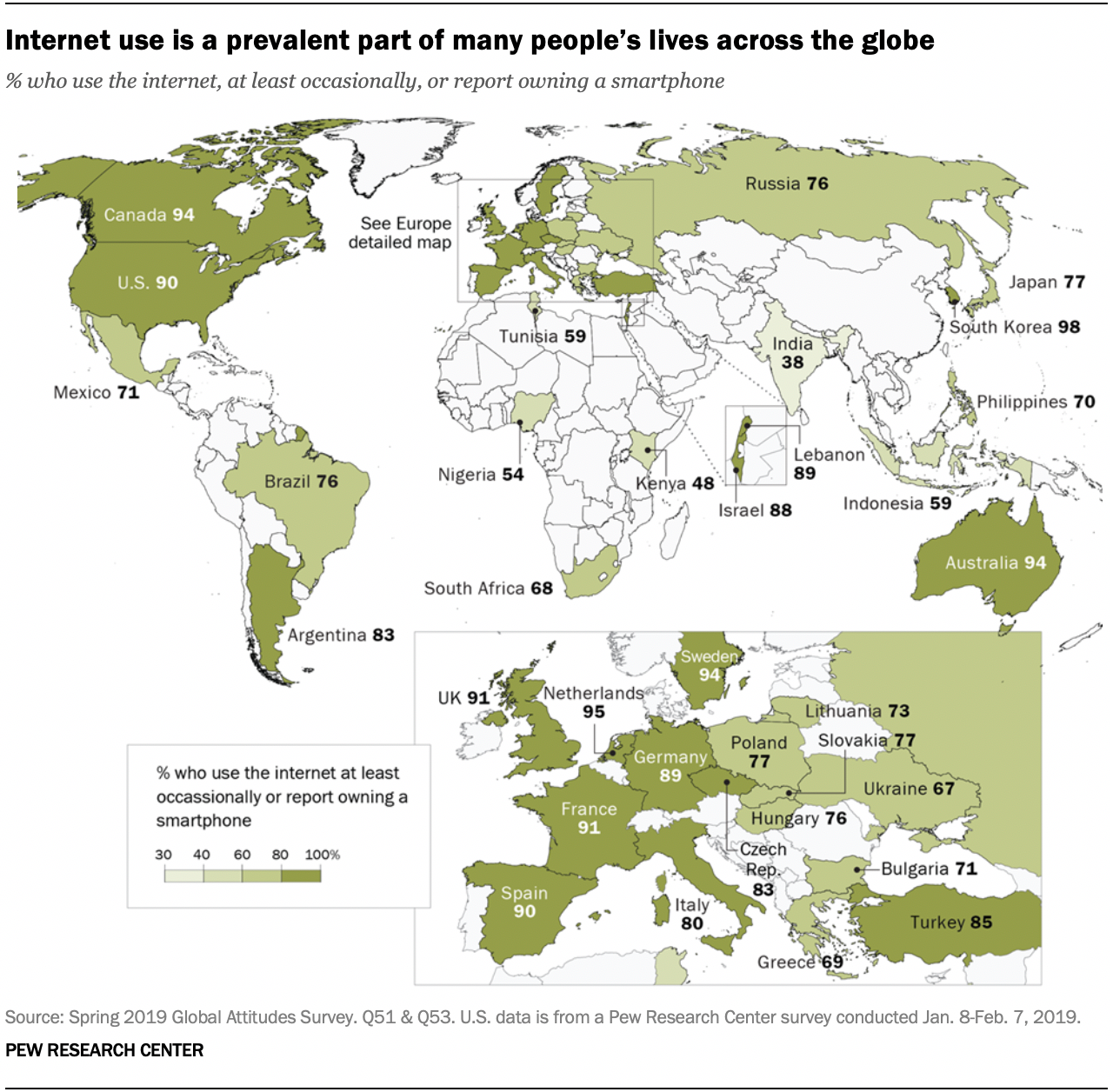 The divide between these two age groups is generally greater in emerging economies, but less stark in more advanced economies like Canada and the Netherlands. And in many countries, 100% of respondents in the youngest group use the internet.

Differences between 18- to 29-year-olds and those ages 30 to 49 are quite small in many countries and are nonexistent in some countries, including Japan and France.

3Whether people use the internet varies widely by level of education in each of the surveyed countries. Internet use (including smartphone ownership) is particularly rare among people with a lower level of completed education in Nigeria, where only 13% of people say they use the internet, compared with 73% of those with more education in that country. In 10 countries surveyed, the difference in reported internet use between those with lower educational attainment and those with more education is greater than 30 percentage points. In two countries, Italy and Turkey, the higher-lower education difference is quite stark: Everyone in these countries with a higher education level reports using the internet, compared with only 77% and 82%, respectively, of those with a lower level of education.

4 Across all publics surveyed, people with incomes higher than the national median are more likely to report using the internet than those with lower incomes. Differences in reported internet use are most pronounced in Central and Eastern Europe, as well as Tunisia, where differences exceed 30 percentage points. Only in Spain, Australia, the Netherlands and South Korea are there differences of less than 10 points between those with higher and lower incomes.

5 Majorities in each of the 34 countries surveyed own a mobile phone. In Europe, a median of 93% report owning a mobile phone, with a high of 97% in the Netherlands and Sweden. Only in Mexico, Kenya, Indonesia and India is mobile phone ownership below 80%. Smartphone ownership rates are similar but vary globally. Only 36% of Kenyans and 32% of Indians say they own a smartphone, while highs of 97% in South Korea and 88% in Lebanon say the same.

6 There is a strong relationship between smartphone ownership and per capita gross domestic product. Those in wealthier countries tend to report owning a smartphone in higher shares than those in less wealthy nations. However, the relationship is not perfect. Smartphone ownership in Lebanon is just below that of South Korea, even as Lebanese have less than half the per capita income of South Koreans. 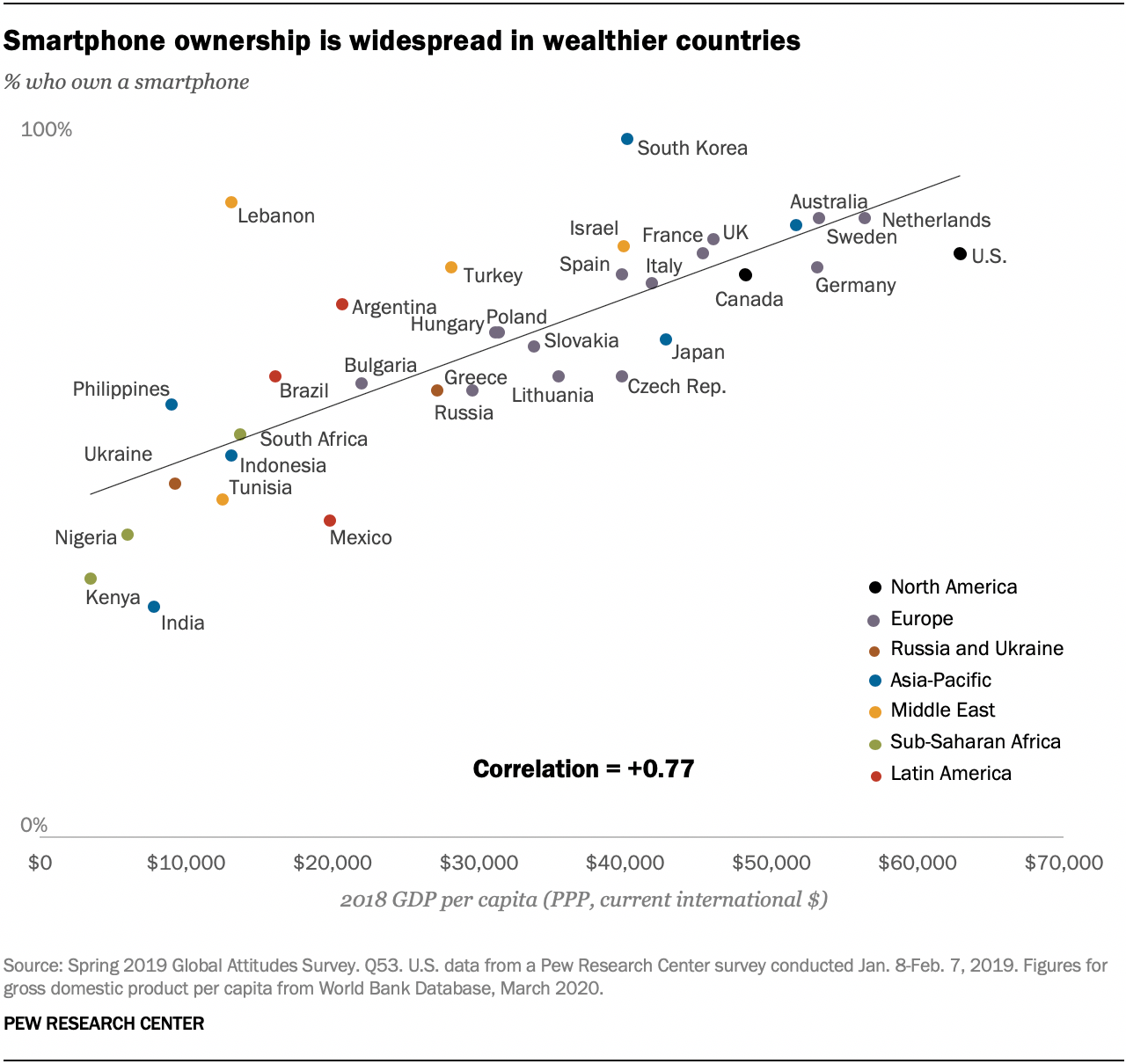 7 While social media use falls below general internet use in 30 of 34 countries surveyed, a majority in most countries say they use some form of social media. Three-quarters or more use social media in Lebanon, Israel, South Korea and Sweden. Germans (52%) have the lowest level of use of social media of those surveyed in Europe, more closely resembling their eastern neighbors in Poland (58%) and the Czech Republic (56%) than their western counterparts in France (70%) and the Netherlands (65%). This contrasts with India, where only 31% of people say they use social media, although a majority there do not use the internet at all. 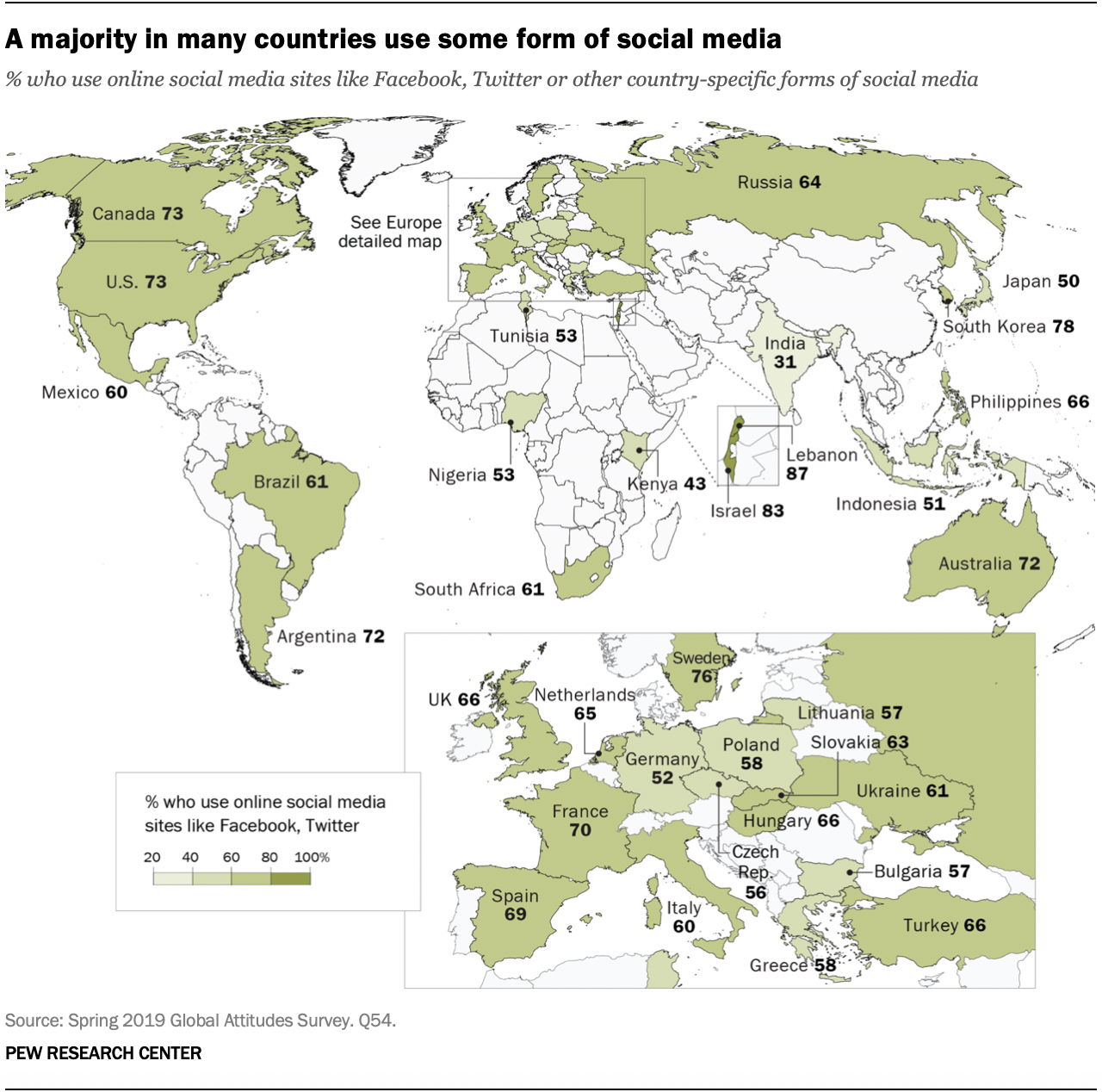 Note: Here are the questions used for this report, along with responses, and its methodology. U.S. smartphone and internet data was drawn from a separate list of questions.