Nearly one-in-four U.S. workers – 38.1 million out of 157.5 million – are employed in the industries most likely to feel an immediate impact from the COVID-19 outbreak, according to a Pew Research Center analysis of government data. Among the most vulnerable are workers in retail trade (10% of all workers) and food services and drinking places (6%). In total, these two industries employ nearly 26 million Americans.

The COVID-19 pandemic is likely to have a widespread negative impact on business activity for some time to come. This analysis focuses on the major demographic characteristics of workers in these industries that deliver in-person services, such as restaurants and child day care, whose finances are most immediately under pressure.

The estimates are derived from labor force statistics published by the U.S. Bureau of Labor Statistics, based either on its survey of households, the Current Population Survey (CPS), or its survey of business establishments, the Current Employment Statistics (CES) program. The CPS is the government’s official source for monthly estimates of unemployment and the CES is the official source for monthly estimates of payroll employment.

The United States is in a historic moment, and there is a great deal of uncertainty about the short- and long-term economic effects of this pandemic. But it’s safe to say the short-term impact on employment will be significant. The latest report from the Department of Labor on unemployment insurance claims shows an increase of 3 million in initial claims in the week ending March 21 compared with the previous week. A 15% reduction in the workforce of higher-risk industries alone would add 5.7 million workers to the unemployment rolls. This would result in an almost immediate doubling of the U.S. unemployment rate from 3.5% to 7%. In contrast, it took nearly two years for the unemployment rate to double during the Great Recession as it climbed from 5% in December 2007 to 10% in October 2009. 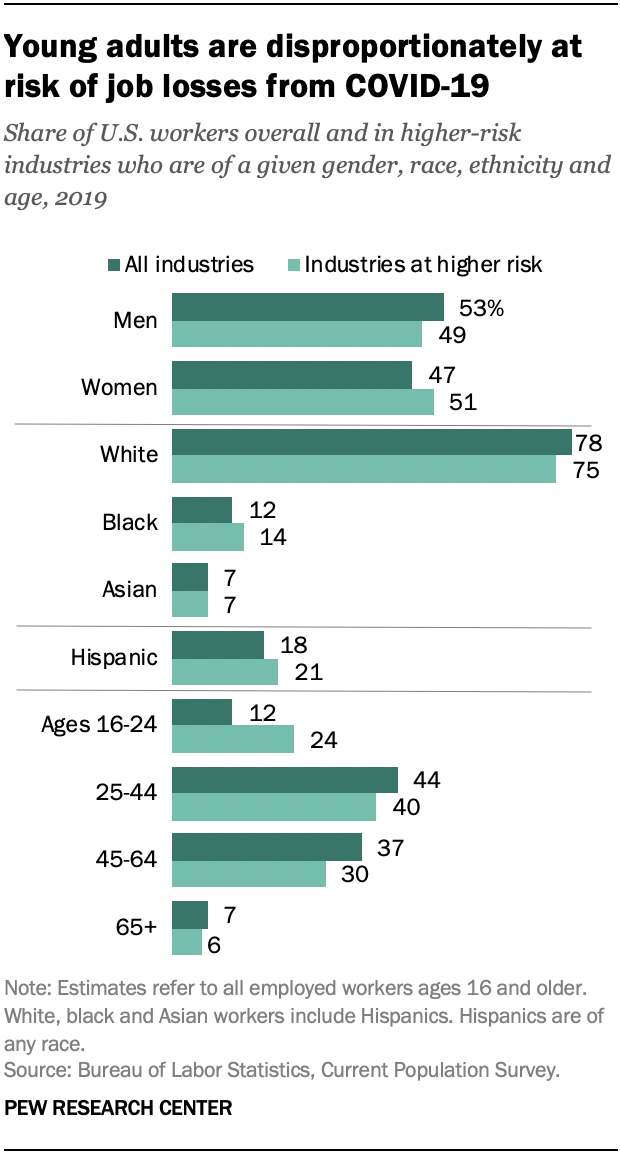 Based on the demographics of workers in higher-risk industries, young people in particular are set to be disproportionately affected by virus-related layoffs. Among the 19.3 million workers ages 16 to 24 in the economy overall, 9.2 million, or nearly half, are employed in service-sector establishments. Younger workers make up 24% of employment in higher-risk industries overall, and many establishments in these industries are facing a high likelihood of closure in areas with more severe COVID-19 outbreaks. 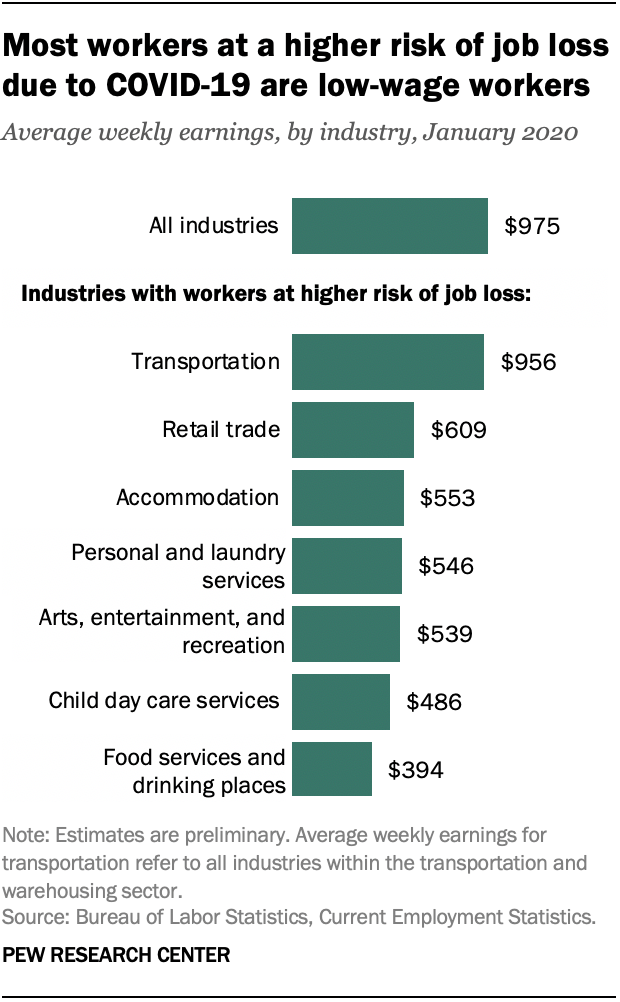 Workers in these industries have lower-than-average earnings. Across all industries, the average weekly earnings in January 2020 were $975. By contrast, workers in food services and drinking places earned only $394 per week on average. Workers in the other high-risk industries had earnings ranging from around $500 to $600 per week, with the exception being transportation workers, who earned $956 per week. Many of these workers do not have access to benefits like paid leave and teleworking, which some workers in other types of industries are utilizing to comply with social distancing guidelines.

While businesses in some of the higher-risk industries are trying to adapt to the new economic reality for survival – for example, restaurants moving to take-out orders and “contactless delivery” – many others, including entertainment-related businesses such as sports arenas and movie theaters, are presently closed, either voluntarily or due to government mandates. In other cases, such as air transportation, operations are largely curtailed by travel restrictions.

Employment outcomes in retail trade, which employs 16.2 million workers, are more uncertain. While brick-and-mortar operations are at higher risk because some are closed by government mandate and shoppers are otherwise encouraged to stay home, electronic shopping providers may stand to benefit.