Adults who have never been married or who are currently living with a partner are the most likely to say they have ever used an online dating service: 52% and 46%, respectively, say this. By comparison, 35% of Americans who are divorced, separated or widowed say they have ever used a dating site or app, while 16% of married adults say the same, according to a new analysis of a Pew Research Center survey conducted in October 2019.

Pew Research Center has long studied the changing nature of romantic relationships and the role of digital technology in how people meet potential partners and navigate web-based dating platforms. This post focuses on the patterns, experiences and attitudes related to online dating in America. These findings are based on a survey conducted Oct. 16 to 28, 2019, among 4,860 U.S. adults. This includes those who took part as members of Pew Research Center’s American Trends Panel (ATP), an online survey panel that is recruited through national, random sampling of residential addresses, as well as respondents from the Ipsos KnowledgePanel who indicated that they identify as lesbian, gay or bisexual. The margin of sampling error for the full sample is plus or minus 2.1 percentage points. The 2015 data were collected via a telephone survey of 2,001 U.S. adults conducted June 10 to July 12, 2015 (for more, see the 2015 survey’s methodology).

For more, see the report’s methodology about the project. Here are the questions used for this report, along with responses.

The share of Americans who have ever used an online dating platform has gone up across marital status groups, but the increase has been most pronounced among those living with a partner. The share of cohabiting Americans who say they had ever used a dating site or app has roughly tripled from 15% in 2015 to 46% today. (Pew Research Center’s 2015 survey about online dating was conducted via telephone, while the 2019 survey was fielded online through the Center’s American Trends Panel. In addition, there were some changes in question wording between these surveys. Please read the methodology section for full details on how the 2019 survey was conducted.)

Although married adults report the lowest rate of previous online dating use, married Millennials are more likely than older generations to have used a dating app or site before. Around three-in-ten married Millennials (31%) say they have used an online dating platform, compared with 17% among married Gen Xers and fewer than one-in-ten among married Boomers (7%) and those in the Silent Generation (4%). 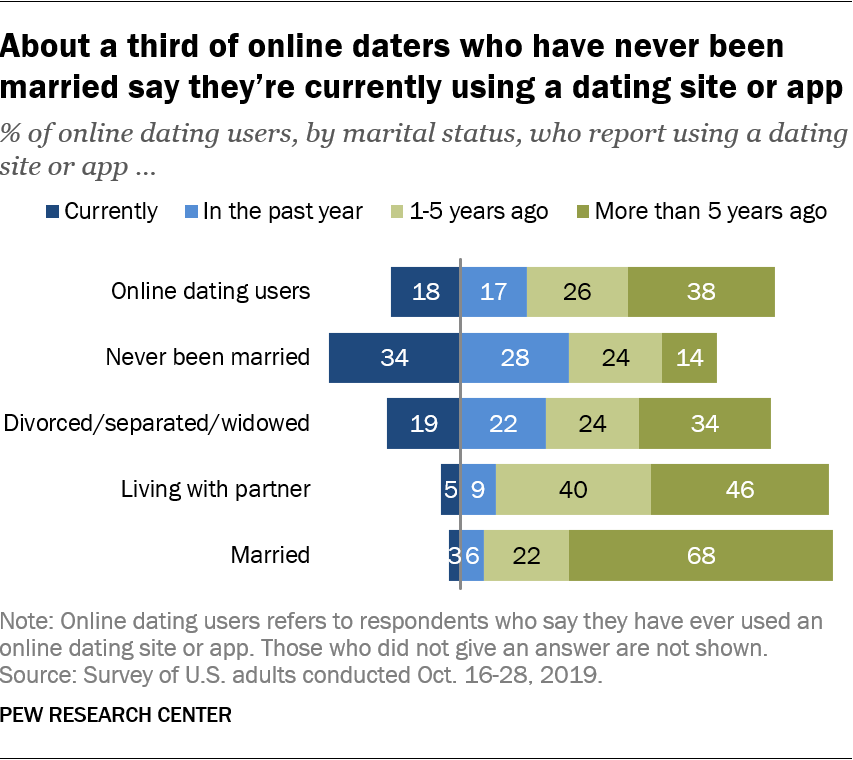 As one might expect, relatively few Americans who are married or living with a partner are currently active on dating platforms. Still, among those who say they have ever used an online dating platform, 5% of cohabiting and 3% of married people say they are currently using one of these services. That means 1% of all married adults and 2% of all cohabiting adults in the U.S. are current users of dating sites or apps.

Note: This is an update of a post originally published Feb. 18, 2016. Here are the questions used for this report, along with responses, and its methodology.