Religion has been a topic of conversation during the Democratic presidential primary, and some candidates have pointed out how their religious beliefs have shaped their political positions.

But Americans don’t consider the Democratic candidates to be particularly religious, according to a new Pew Research Center survey that covers four of the top contenders: Joe Biden, Pete Buttigieg, Bernie Sanders and Elizabeth Warren. 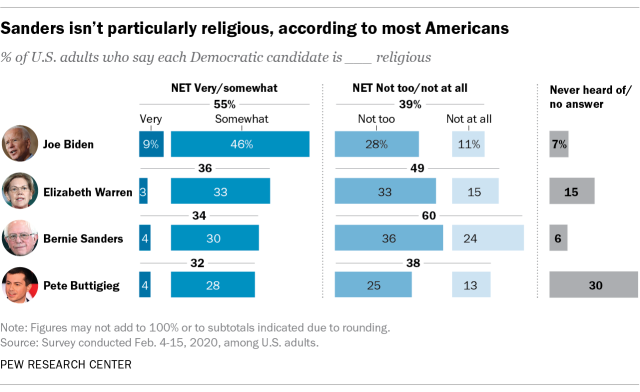 Sanders, who has emerged as the front-runner after winning the Nevada caucuses by a wide margin, is described as “not too” or “not at all” religious by six-in-ten Americans. Just a third of respondents say Sanders is at least “somewhat” religious, including only 4% who say he is “very” religious.

If successful, Sanders would be the first Jewish nominee at the top of a major party ticket. The Vermont senator has said he is “not actively involved with organized religion” but that being Jewish has shaped his values.

For this analysis of views of the religiousness of a selection of the Democratic candidates for president, we surveyed 6,395 U.S. adults from Feb. 4 to 15, 2020. All respondents to the survey are part of Pew Research Center’s American Trends Panel (ATP), an online survey panel that is recruited through national, random sampling of residential addresses. This way nearly all U.S. adults have a chance of selection. The survey is weighted to be representative of the U.S. adult population by gender, race, ethnicity, partisan affiliation, education and other categories. Read more about the ATP’s methodology.

Here are the questions used for this analysis, along with responses and its methodology.

The survey was conducted Feb. 4 to 15, just days after a tight Iowa caucus showed Buttigieg and Sanders nearly tied for first place and before Sanders’ victory in Nevada. Sanders won the New Hampshire primary while the survey was in the field. The survey included the top four Democrats in polling averages when the questionnaire was finalized in mid-January; it did not ask about Mike Bloomberg, Amy Klobuchar or any other Democratic candidates.

Though Sanders is the only candidate who is described as “not too” or “not at all” religious by a majority of Americans, public opinion also leans more toward the view that Buttigieg and Warren are not very religious. For instance, 25% say Buttigieg is “not too” religious and 13% say he’s “not at all” religious, while 28% view him as “somewhat” religious and 4% say he’s “very” religious. Buttigieg is an openly gay, churchgoing Episcopalian who speaks regularly about his faith. When campaigning, he often emphasizes his differences with religious conservatives and says that “God does not belong to a political party.”

Three-in-ten U.S. adults say they have never heard of Buttigieg (or decline to answer the question), the highest share among the candidates mentioned. A smaller share of Americans haven’t heard of Warren (15%); about half say the self-identified Methodist is “not too” or “not at all” religious, while 36% say she is at least somewhat religious.

Biden is the only candidate who is considered at least “somewhat” religious by more than half of U.S. adults (55%), though fewer than one-in-ten (9%) describe him as “very” religious. If elected, Biden, who often talks about his faith on the campaign trail, would be the country’s second Catholic president after John F. Kennedy. 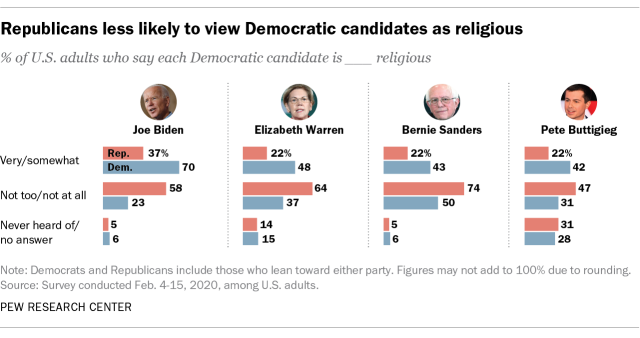 Opinions about all four candidates are divided along party lines: Respondents who identify as Democrats or say they lean toward the Democratic Party are much more likely than Republicans and GOP leaners to say that Biden, Buttigieg, Sanders or Warren are at least somewhat religious.

For example, Warren is viewed as at least somewhat religious by 48% of Democrats but only by 22% of Republicans.

The divide is particularly stark for Biden: A large majority of Democrats see the former vice president as at least somewhat religious, compared with fewer than half of Republicans who say this (70% vs. 37%).

There also are differences by religious tradition.

White evangelical Protestants – a heavily Republican, highly religious group – are among the least likely to say any of the four candidates is very or somewhat religious.

Black Protestants – an overwhelmingly Democratic constituency, and also a highly religious group – are most likely to see Biden, Sanders and Warren as religious. This pattern does not apply to Buttigieg; just four-in-ten black Protestants say the former mayor is at least somewhat religious, identical to the share of white Catholics, atheists and agnostics who say the same.

While some Democrats are highly religious – especially black and Hispanic Democrats – the party has become increasingly unaffiliated in recent years. The share of Democrats and Democratic leaners who identify as Christian declined by 17 percentage points between 2009 and 2019 (from 72% to 55%), according to our telephone polls, while the share who are religiously unaffiliated  jumped by 14 points, from 20% to 34%. 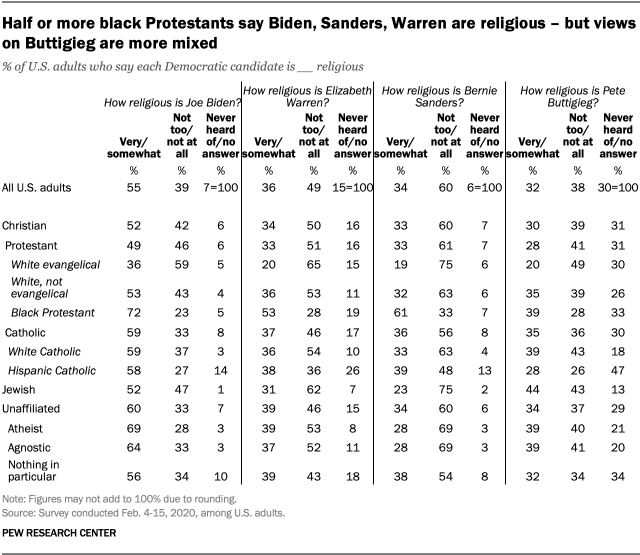 Correction: A previous version of this post incorrectly cited the share of U.S. adults who say Joe Biden is “very” religious (9%). Figures were correct in the chart “Sanders isn’t particularly religious, according to most Americans.”

Note: Here are the questions used for this analysis, along with responses and its methodology.