Public attitudes about the measles, mumps and rubella (MMR) vaccine remain broadly positive in the United States, according to a new Pew Research Center survey. 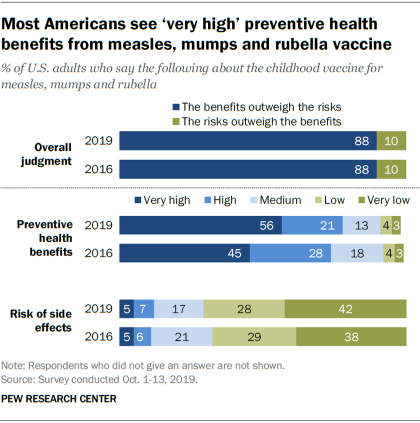 An overwhelming majority of U.S. adults (88%) say the benefits of the MMR vaccine outweigh the risks – the same share as in 2016, when the Center last asked this question – while the share who consider its preventive health benefits to be “very high” has grown by 11 percentage points during that time (from 45% to 56%). A 69% majority of Americans consider the risk of side effects from the vaccine to be either low or very low, about the same as in 2016.

The findings come amid rising public health concerns about measles outbreaks in the U.S. and around the world. In 2019, the U.S. reported the highest annual number of measles cases in more than 25 years. And a recent study found that vaccination rates in more than half of U.S. states have been declining over the past several years.

These findings are based on a survey conducted Oct. 1-13, 2019, among 3,627 U.S. adults. Everyone who took part is a member of Pew Research Center’s American Trends Panel (ATP), an online survey panel that is recruited through national, random sampling of residential addresses. Recruiting our panelists by phone or mail ensures that nearly all U.S. adults have a chance of selection. This gives us confidence that any sample can represent the whole population. The margin of sampling error for the full sample is plus or minus 2.1 percentage points.

Ratings of the preventive health benefits and risk of side effects of the MMR vaccine were asked of 1,811 U.S. adults from the same ATP survey; the margin of error for all asked is plus or minus 2.9 percentage points. For more, see the full topline questionnaire and methodology. 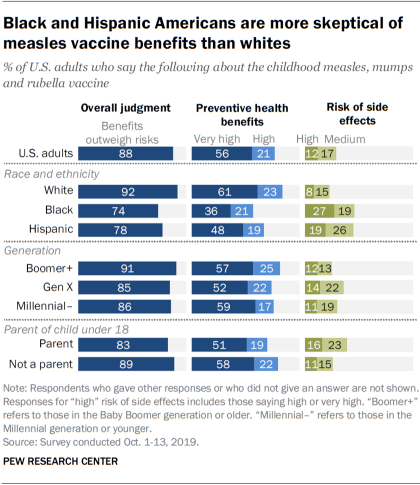 Adults with a child under age 18 are somewhat less positive about the MMR vaccine than those with no children under the age of 18. Those with minor age children are less likely to rate the preventive health benefits as very high or high (70% say this, compared with 81% of non-parents) and more likely to consider the risks of side effects from these vaccines as either medium or high (39% vs. 26%).

There are modest differences by generation. Baby Boomer and older adults are more likely than younger generations to say the health benefits of the MMR vaccine outweigh risks. (A 2016 Center survey found parents of children ages 0 to 4 were less convinced of the preventive health benefits and more concerned about risks of the MMR vaccine. The 2019 survey did not include details about the age of respondents’ children – although views among parents who were Gen X and older were similar to those of Millennial and Gen Z parents.) 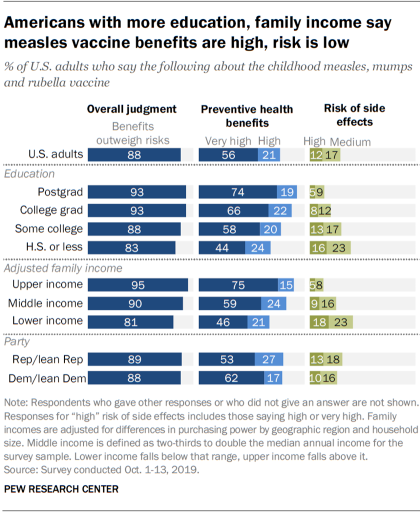 Those with higher levels of education and higher family incomes are particularly likely to consider the preventive health benefits of the MMR vaccine as very high and, on the flip side, to see the risk of side effects as low.

For example, an overwhelming majority of Americans with a postgraduate degree (93%) say the health benefits of the MMR vaccine are very high or high, while 68% of those with a high school degree or less education say the same.

Americans with higher family incomes also are especially likely to say there are high preventive health benefits and low risk of side effects from the MMR vaccine. (Family incomes are adjusted for differences in purchasing power by geographic region and household size.)

Beliefs about the benefits and risks of the MMR vaccine are not strongly linked to politics. Democrats and Republicans (including those who lean to each party) are equally likely to say the benefits of these vaccines outweigh the risks, as was also the case in 2016. 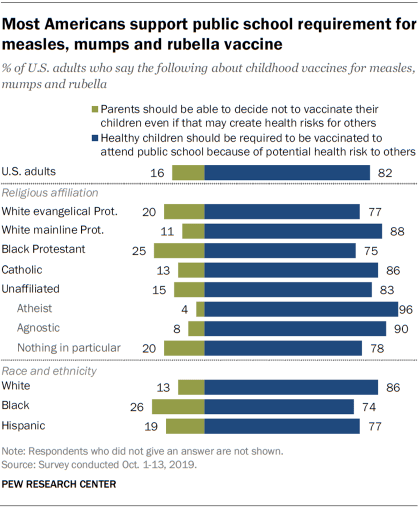 As the number of measles cases has risen in the U.S., lawmakers in some states have introduced legislation to limit or eliminate exemptions to school-based vaccination requirements based on personal or religious beliefs. However, many of these proposals have been met with strong opposition from a vocal minority who think vaccination should be a parent’s choice.

The Center’s new survey finds that a strong majority of the American public (82%) supports required MMR vaccination for public school attendance, while 16% feel parents should be able to decide whether to vaccinate their children even if that might create health risks for others. Views on this issue are about the same as in 2016.

Majorities across all major religious groups support a school-based requirement for the MMR vaccine. However, white evangelical Protestants (20%) are slightly more likely than white mainline Protestants (11%) to think that parents should be able to decide whether to have their children vaccinated.

Compared with white Americans, smaller majorities of black and Hispanic adults support a school requirement for the MMR vaccine. Roughly a quarter of black (26%) and 19% of Hispanic Americans say vaccination should be a parent’s decision, compared with 13% of whites who say the same thing. 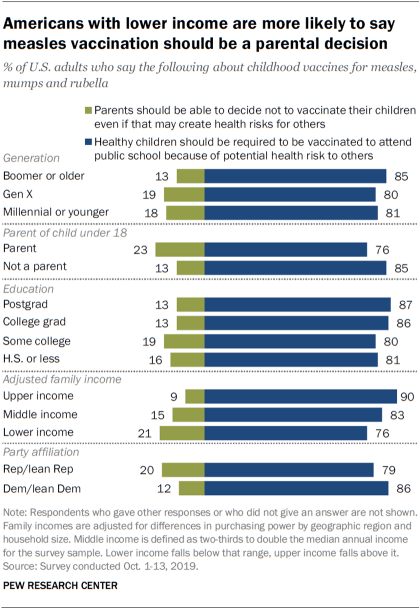 Although large majorities across demographic groups believe healthy children should be required to be vaccinated to attend public school, support for parental choice on this matter is somewhat larger among parents of minor children and lower-income Americans.

Roughly a quarter of parents of children under the age of 18 (23%) say vaccination should be a parental decision, compared with 13% of those who are not parents of minor children.

There are also modest differences by political party, with Republicans (including independents who lean to the GOP) somewhat more likely than their Democratic counterparts to say parents should be able to decide whether to vaccinate their children (20% vs. 12%).

There are no sizable differences on this issue among people with differing levels of education.