America’s newsrooms are changing in important ways. Mergers, closures and layoffs have affected a variety of media organizations – especially newspapers – and these trends are reshaping the nation’s media landscape.

Here are nine charts on the state of newsroom employment in the United States today: 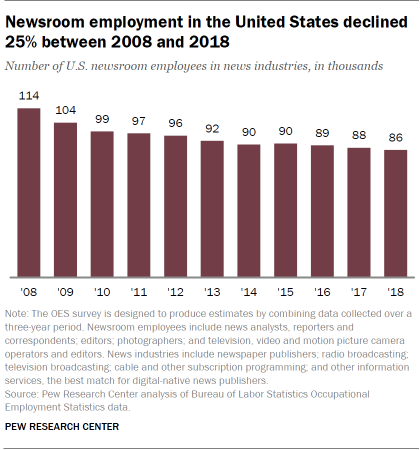 Newsroom employment in the U.S. dropped by 25% over the past decade. In 2008, about 114,000 newsroom employees – reporters, editors, photographers and videographers – worked in five industries that produce news: newspaper, radio, broadcast television, cable and “other information services” (the best match for digital-native news publishers). By 2018, that number had declined to about 86,000, a loss of about 28,000 jobs. 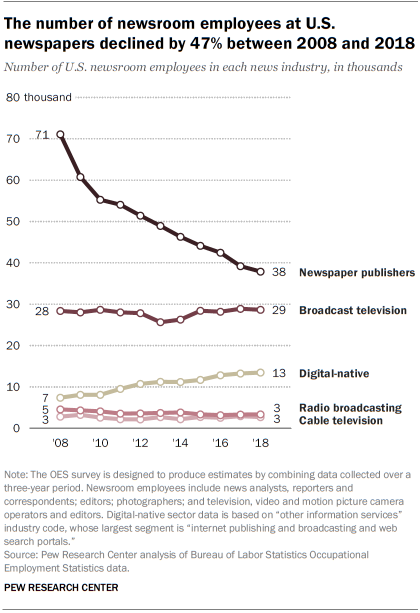 Only the digital-native news sector saw notable job growth during this period. The number of digital-native newsroom employees increased by 82% between 2008 and 2018, from about 7,400 workers to about 13,500. This increase, however, fell far short of offsetting the loss of about 33,000 newspaper newsroom jobs.

Layoffs have pummeled U.S. newspapers in recent years. Roughly a quarter of U.S. newspapers with an average Sunday circulation of 50,000 or more (27%) experienced layoffs in 2018, according to a Pew Research Center analysis of news articles that cited staff layoffs at these outlets. The layoffs came on top of the roughly one-third (32%) of papers in the same circulation range that experienced layoffs in 2017.

While news reports did not always provide the exact number of newsroom staff being laid off, some broad conclusions can be drawn from the data. Among the newspapers for which the Center could determine the number of laid-off staff, 62% laid off more than 10 people in 2018, more than the 42% that did so in 2017. This suggests a year-over-year increase in the number of jobs typically cut by newspapers during layoffs. 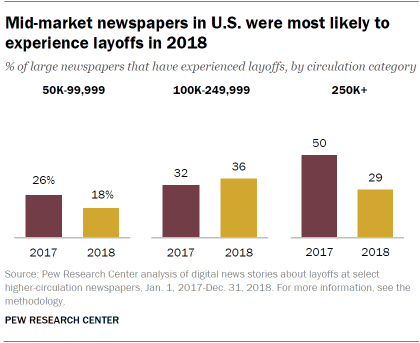 Long known as the media capital of the world, New York, at 12%, has the greatest share of all newsroom employees. This is more than twice the share living in the Los Angeles and Washington, D.C., metro areas, each of which is home to 5% of the nation’s newsroom employees. 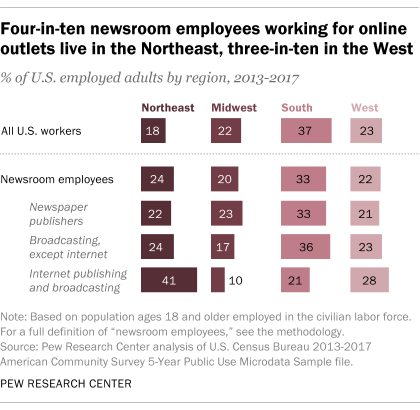 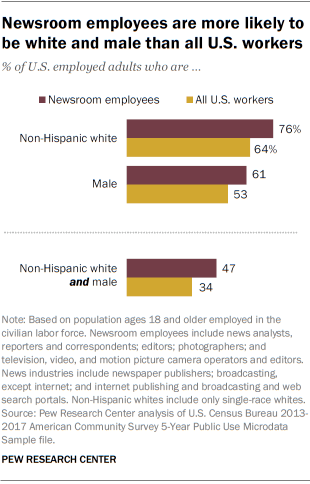 Younger newsroom employees show greater racial, ethnic and gender diversity than their older colleagues. Around four-in-ten (38%) newsroom employees ages 18 to 29 are non-Hispanic white men, compared with 46% of those ages 30 to 49 and 56% of those 50 and older. In each of these age groups, however, newsroom workers are still less diverse than workers overall. 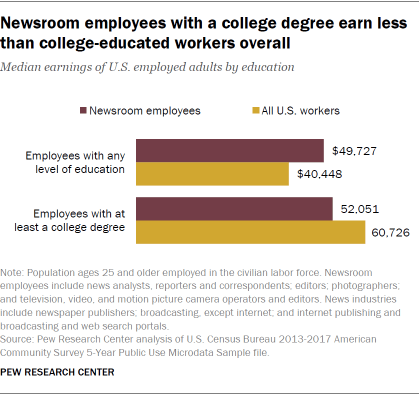 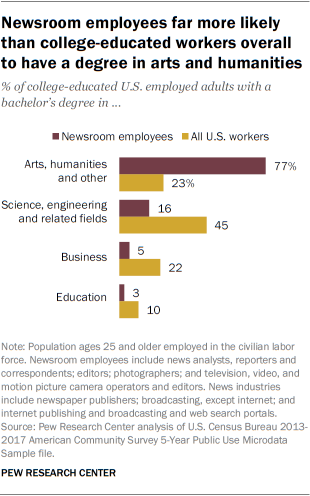 Three-in-ten college-educated newsroom employees have a degree in journalism, making it the most common college major of these workers. Other common majors include communications (13%), English language and literature (11%) and mass media (7%). About 23% of newsroom employees with a college degree majored in something outside of arts and humanities.