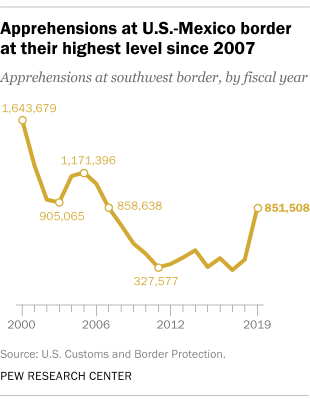 Apprehensions at the U.S.-Mexico border more than doubled between fiscal 2018 and fiscal 2019 but remained below historical highs. There were 851,508 apprehensions in the 2019 fiscal year (October 2018-September 2019), a 115% increase from the previous fiscal year and the highest total in 12 years. Still, the total remained far below the 1,643,679 apprehensions recorded in 2000, the peak year. And apprehensions regularly exceeded 1 million per fiscal year during the 1980s, 1990s and 2000s. 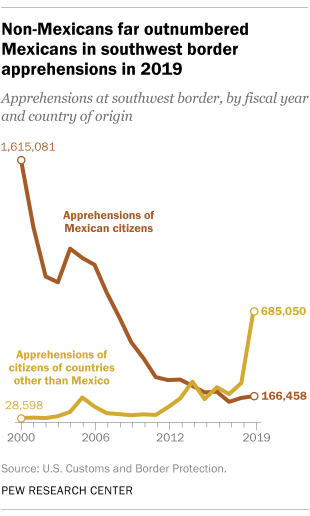 For the first time on record, Mexicans did not account for the largest single country of origin in fiscal 2019. There were more apprehensions of Guatemalans (264,168) and Hondurans (253,795) than Mexicans (166,458), while El Salvador was fourth on the list with 89,811 apprehensions.

The Northern Triangle nations – El Salvador, Guatemala and Honduras – together accounted for 71% of all apprehensions in fiscal 2019. The 607,774 apprehensions from these three countries outnumbered the total from Mexico even though their combined population (32.6 million) is only a quarter of Mexico’s (129.2 million). 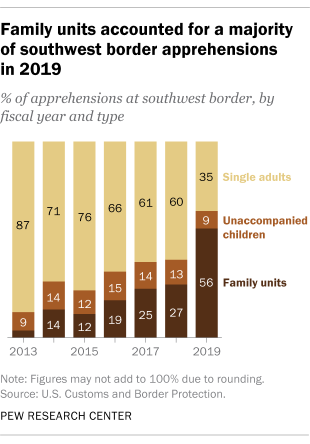 The changing profile of those being apprehended has strained the Border Patrol, which follows different legal protocols for detaining family members and single adults.

People apprehended by Border Patrol may be subject to expedited removal (except for unaccompanied children) but could also become eligible for asylum if officials determine they meet the definition of a refugee. Asylum applications have increased substantially in recent years, while the acceptance rates have remained constant. 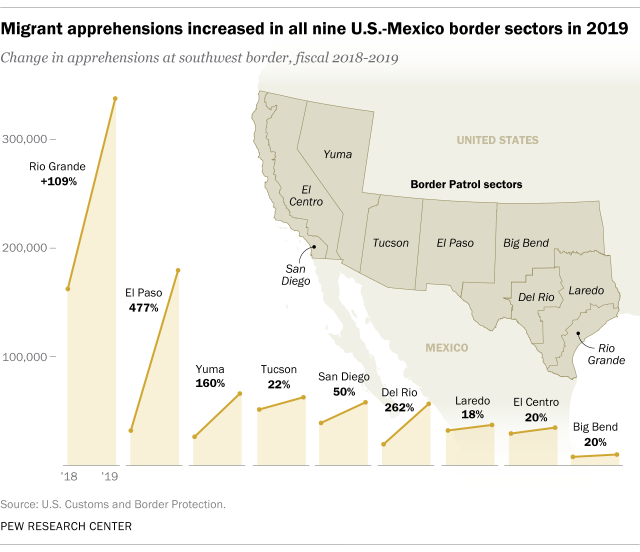 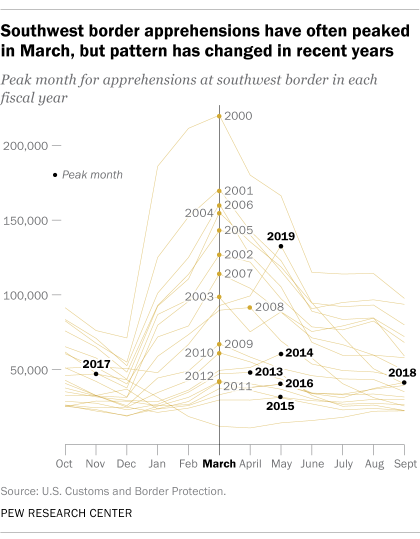 Seasonal migration patterns have changed in recent years. Since 2000, border apprehensions have typically peaked in the spring – most often in March – before declining during the hot summer months, when migration journeys become more perilous. But the pattern has changed since 2013, with the annual peak occurring in months other than March. In 2019, May was the peak month, with 132,856 apprehensions. Apprehensions fell dramatically after May, declining to 40,507 by September, the final month of the fiscal year.

This is an update of a post originally published on April 10, 2019.