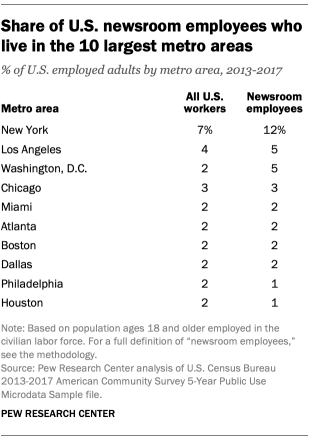 Newsroom employees more likely than U.S. workers overall to work in the Northeast 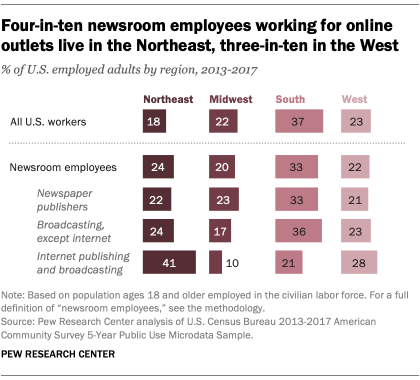 Between 2008 and 2018, the number of U.S. newsroom employees dropped by 25%, from 114,000 to 86,000, according to a July Pew Research Center analysis. The decline affected all regions roughly equally, as the distribution of news jobs across the country has remained essentially unchanged over the last decade. During the 2005-2009 period, 33% of newsroom employees lived in the South, followed by 24% in the Northeast, 22% in the West and 21% in the Midwest. New York (11%), Los Angeles (5%) and Washington (4%) also had about the same shares of newsroom employees during this period as in 2013-2017.

Note: The metro area estimates discussed in this report are based on aggregated geocodes that cover the same or similar geographic areas as the core-based statistical areas (CBSAs) of the same name. For additional details, see the methodology.