The recent mass shootings in El Paso, Texas, and Dayton, Ohio – along with a spate of shootings in Chicago – have brought renewed attention to deadly gun violence in the United States. As President Donald Trump and lawmakers on Capitol Hill contemplate policy responses, here are 10 common questions about gun deaths in the U.S., with answers based on data from the Centers for Disease Control and Prevention (CDC), the FBI and other sources. You can also explore key public opinion findings about gun violence and gun policy in the U.S. by reading our recent roundup.

How many people die from gun-related injuries in the U.S. each year?

In 2017, the most recent year for which complete data is available, 39,773 people died from gun-related injuries in the U.S., according to the CDC. This figure includes gun murders and gun suicides, along with three other, less common types of gun-related deaths tracked by the CDC: those that were unintentional, involved law enforcement or whose circumstances could not be determined. It excludes deaths in which gunshot injuries played a contributing, but not principal, role. (CDC fatality statistics are based on information contained in death certificates.)

Though they tend to get less attention than gun-related murders, suicides have long accounted for the majority of U.S. gun deaths. In 2017, six-in-ten gun-related deaths in the U.S. were suicides (23,854), while 37% were murders (14,542), according to the CDC. The remainder were unintentional (486), involved law enforcement (553) or had undetermined circumstances (338).

What share of all murders and suicides in the U.S. involve a gun?

How has the number of U.S. gun deaths changed over time?

Gun suicides reached their highest recorded level in 2017. But the number of gun murders remained far below the peak in 1993, when there were 18,253 gun homicides – and when overall violent crime levels in the U.S. were much higher than they are today.

How has the rate of U.S. gun deaths changed over time? 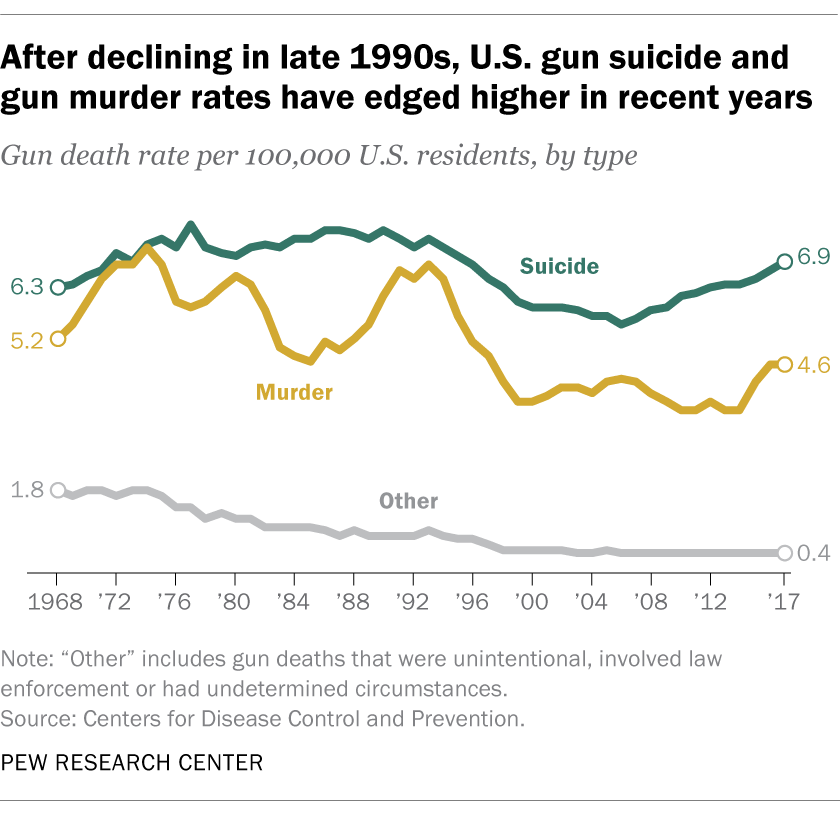 Which states have the highest and lowest gun death rates in the U.S.? 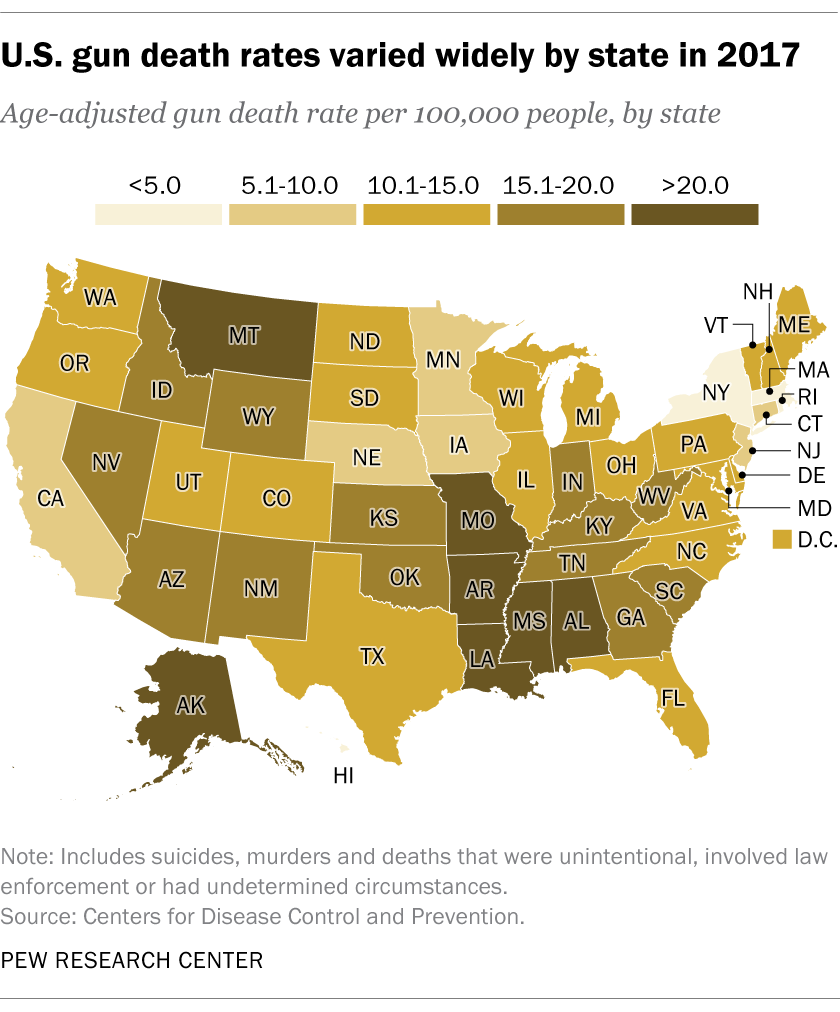 How does the gun death rate in the U.S. compare with other countries?

The gun death rate in the U.S. is much higher than in most other nations, particularly developed nations. But it is still far below the rates in several Latin American nations, according to a study of 195 countries and territories by researchers at the Institute for Health Metrics and Evaluation at the University of Washington.

How many people are killed in mass shootings in the U.S. every year?

This is a difficult question to answer because there is no single, agreed-upon definition of the term “mass shooting.” Definitions can vary depending on factors including the number of victims and the circumstances of the shooting.

The FBI collects data on “active shooter incidents,” which it defines as “as one or more individuals actively engaged in killing or attempting to kill people in a populated area.” Using the FBI’s definition, 85 people – excluding the shooters – died in such incidents in 2018.

The Gun Violence Archive, an online database of gun violence incidents in the U.S., defines mass shootings as incidents in which four or more people – excluding the shooter – are shot or killed. Using this definition, 373 people died in these incidents in 2018.

Regardless of the definition being used, fatalities in mass shooting incidents in the U.S. account for a small fraction of all gun murders that occur nationwide each year.

How has the number of mass shootings in the U.S. changed over time? 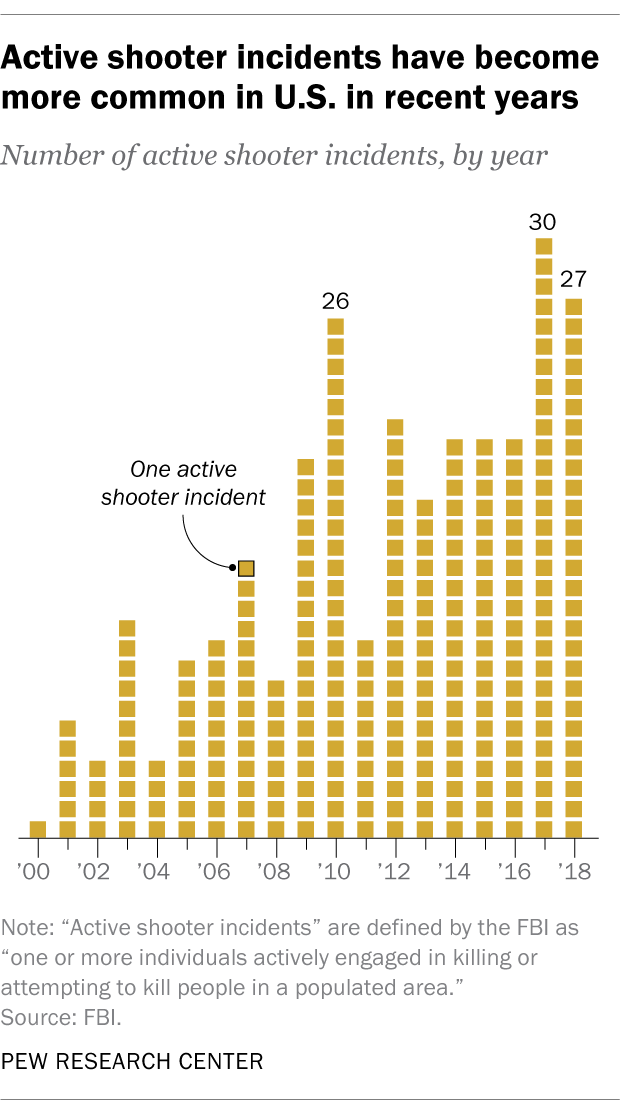 The same definitional issue that makes it challenging to arrive at an exact number of mass shooting fatalities comes into play when trying to determine the frequency of U.S. mass shootings over time. The unpredictability of these incidents also complicates matters: As Rand Corp. noted in a 2018 research brief, “Chance variability in the annual number of mass shooting incidents makes it challenging to discern a clear trend, and trend estimates will be sensitive to outliers and to the time frame chosen for analysis.”

Which types of firearms are most commonly used in gun murders in the U.S.?

It’s important to note that the FBI’s statistics do not capture the details on all gun murders in the U.S. each year. The FBI’s data is based on information submitted by state and local police departments, and not all agencies participate or provide complete information each year. In 2017, nine-in-ten law enforcement agencies submitted data to the FBI.

Key facts about Americans and guns
Suicides account for most gun deaths
Gun homicides steady after decline in '90s; suicide rate edges up
Why timely, reliable data on mass killings is hard to find
Bipartisan support for some gun proposals, stark partisan divisions on many others
Defining generations: Where Millennials end and Generation Z begins
How the Coronavirus Outbreak Has – and Hasn’t – Changed the Way Americans Work
What We Know About Gen Z So Far
Broad agreement in U.S. – even among partisans – on which news outlets are part of the ‘mainstream media’
Quiz: Are you a Core Conservative? A Solid Liberal? Or somewhere in between?