Congressional leaders and the White House recently agreed on a two-year spending deal that would raise the national debt limit. The deal, which still must be approved by the full Congress, would increase federal spending and suspend the debt ceiling until after the 2020 presidential election.

With federal spending and debt back in the news, it’s a good time for an update of our primer on the U.S. national debt, the debt limit and interest payments on the nation’s credit line:

1The federal government’s total debt stands at $22.023 trillion as of the end of June, according to the Treasury Department’s monthly reckoning. Of this amount, nearly $22 trillion is subject to the statutory debt ceiling, leaving just $25 million in unused debt capacity. 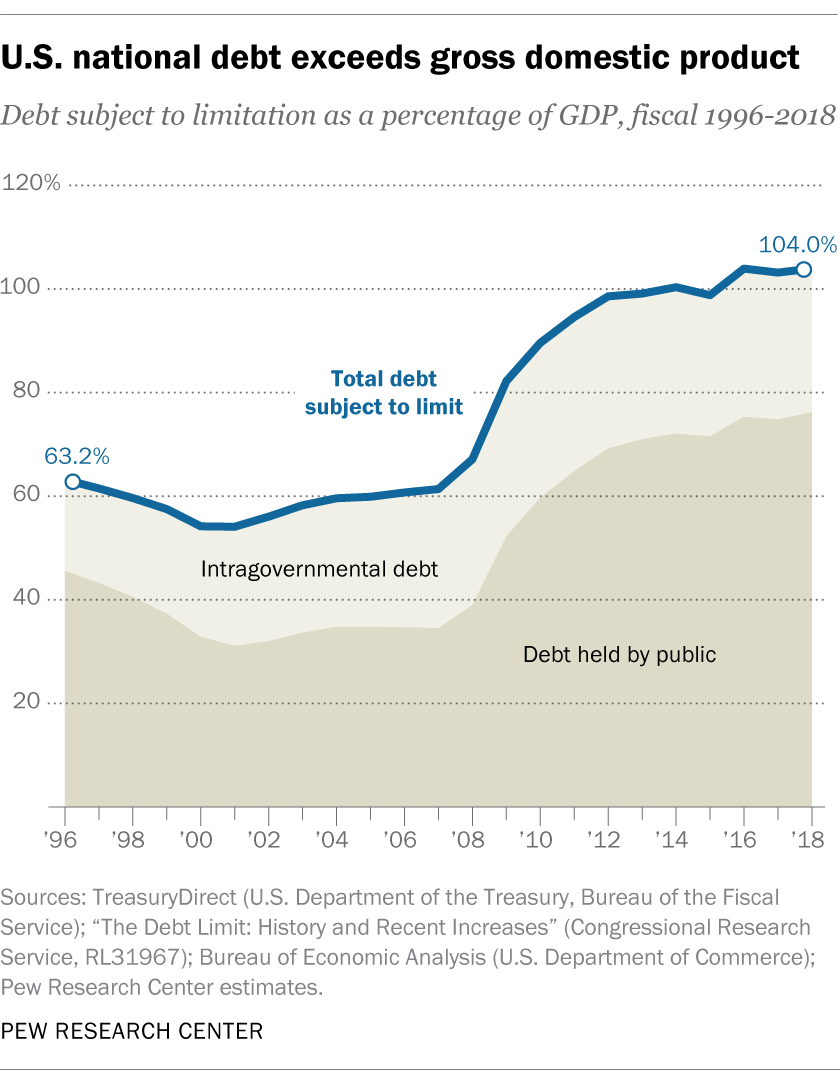 The nation’s debt is now bigger than its gross domestic product, which was an estimated $21.06 trillion in the first quarter of 2019. Debt as a share of GDP grew throughout the 1980s and early 1990s, then leveled off before rising steeply during and after the 2008 financial crisis. The overall debt load has just about equaled or exceeded GDP since late 2012, which had not previously been the case since the end of World War II.

3Though U.S. government debt is perhaps the most widely held class of security in the world, 26.5% of the debt (about $5.83 trillion) is owed to another arm of the federal government itself as of the end of June. The single biggest creditor, in fact, is Social Security: The program’s retirement and disability trust funds together held more than $2.9 trillion in special non-traded Treasury securities, or 13.3% of the total debt. (Social Security revenues exceeded benefit payments for many years; the surplus was required by law to be invested in Treasuries.) Another big holder is the Federal Reserve system, which as of mid-July collectively held nearly $2.1 trillion worth of Treasuries, or 9.5% of the total debt. (The Fed’s holdings are included in the “debt held by public” category.) 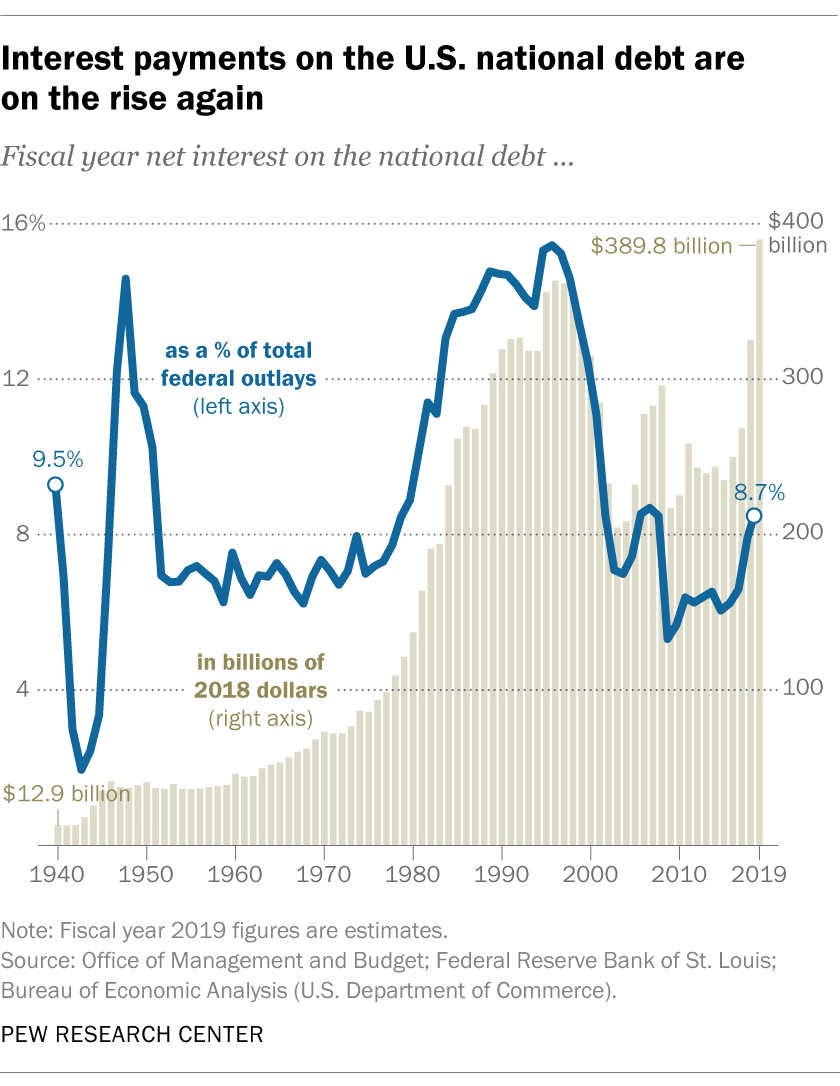 Net interest payments on the debt are estimated to total $393.5 billion this fiscal year, or 8.7% of all federal outlays. (The government projects it will pay out a total of $593.1 billion in interest in fiscal 2019, which ends Sept. 30, but that includes interest credited to Social Security and other government trust funds.) By comparison, debt service was more than 15% of federal outlays in the mid-1990s. The share has fallen partly because lower rates have held down interest payments, but also because outlays have risen substantially, up about 29% over the past decade. 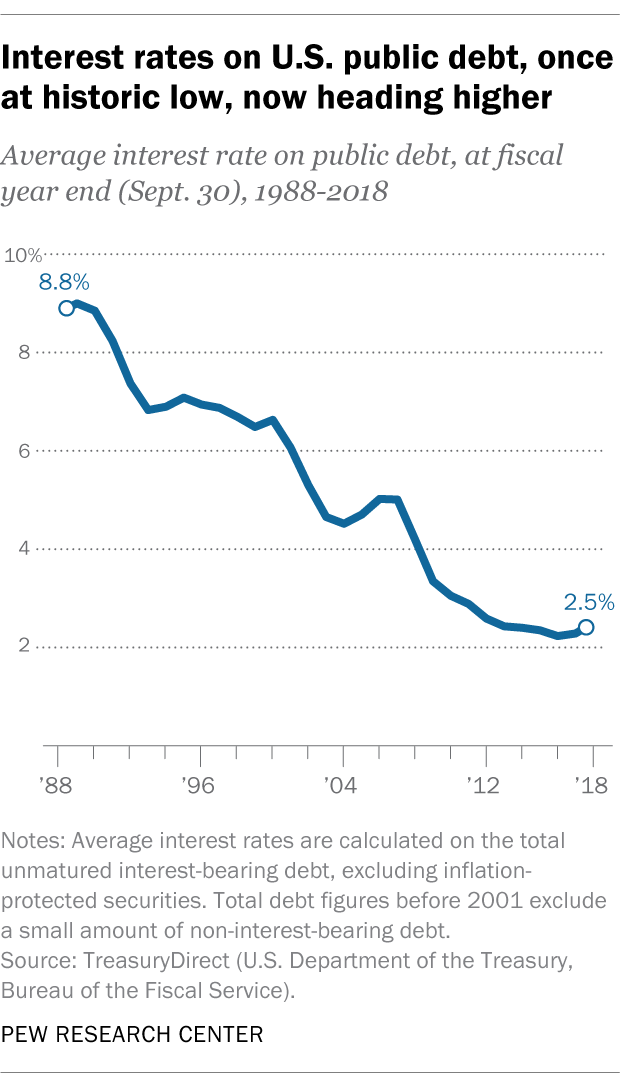 You might think such low rates would put off investors, but U.S. government debt is considered to carry very little risk, and historically demand for it has remained strong. Recently, though, investor demand for Treasuries has appeared to soften, which means the government – and, ultimately, taxpayers – could end up having to pay higher interest rates.

BONUS FACT: Though many may believe that “China owns our debt,” mainland China only held about 5% of the total debt as of May, or about $1.11 trillion. Hong Kong, a “special administrative region” of China, held another $204 billion. China was the top foreign holder of Treasury securities, ahead of Japan, which held roughly $1.1 trillion.