Thirty years after the debut of the World Wide Web, internet use, broadband adoption and smartphone ownership have grown rapidly for all Americans – including those who are less well-off financially. But even as many aspects of the digital divide have narrowed over time, the digital lives of lower- and higher-income Americans remain markedly different. 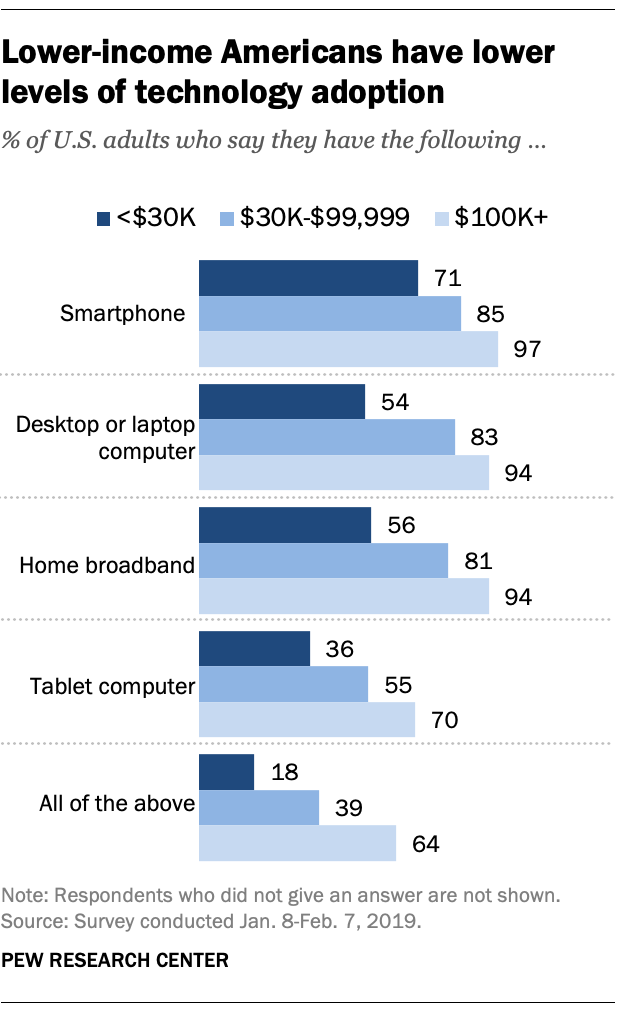 Roughly three-in-ten adults with household incomes below $30,000 a year (29%) don’t own a smartphone. More than four-in-ten don’t have home broadband services (44%) or a traditional computer (46%). And a majority of lower-income Americans are not tablet owners. By comparison, each of these technologies is nearly ubiquitous among adults in households earning $100,000 or more a year.

Higher-income Americans are also more likely to have multiple devices that enable them to go online. Roughly two-thirds of adults living in high-earning households (64%) have home broadband services, a smartphone, a desktop or laptop computer and a tablet, compared with 18% of those living in lower-income households. 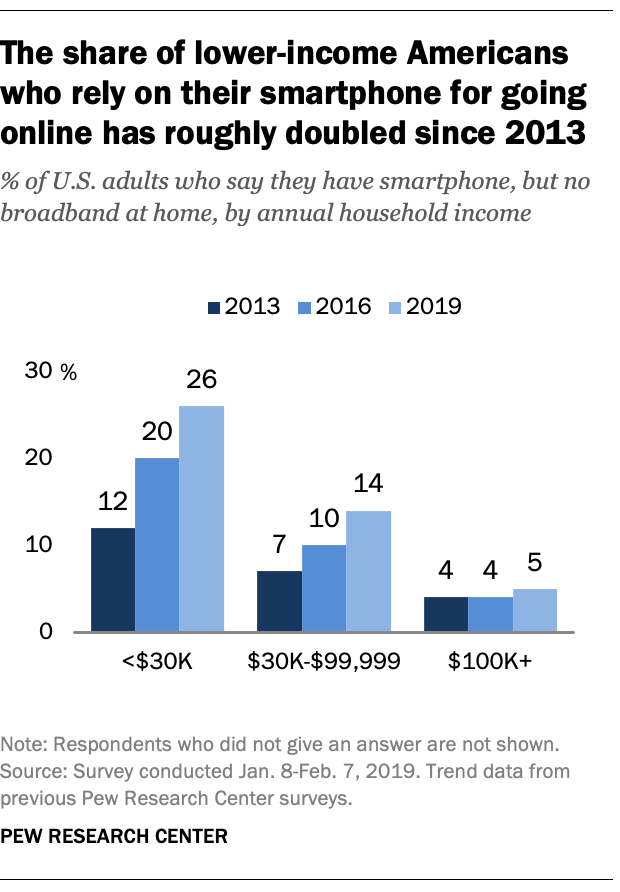 With fewer options for online access at their disposal, many lower-income Americans are relying more on smartphones. As of early 2019, 26% of adults living in households earning less than $30,000 a year are “smartphone-dependent” internet users – meaning they own a smartphone but do not have broadband internet at home. This represents a substantial increase from 12% in 2013. In contrast, only 5% of those living in households earning $100,000 or more fall into this category in 2019.

This reliance on smartphones also means that the less affluent are more likely to use them for tasks traditionally reserved for larger screens. For example, lower-income smartphone owners were especially likely to use their mobile device when seeking out and applying for jobs, according to a 2015 Pew Research Center report.

The disparity in online access is also apparent in what has been called the “homework gap” – the gap between school-age children who have access to high-speed internet at home and those who don’t. In 2015, 35% of lower-income households with school-age children did not have a broadband internet connection at home, according to a Pew Research Center analysis of U.S. Census Bureau data.

The digital divide has been a central topic in tech circles for decades with researchers, advocates and policymakers examining this issue. Federal Communications Commission Chairman Ajit Pai reiterated his commitment to bringing high-speed internet services to lower-income communities, though there are partisan differences in views of how this should be carried out.

Note: See full topline results and methodology here. This is an update of a post originally published March 22, 2017.