Since 2002, Pew Research Center has conducted more than 500,000 interviews with people in 64 countries to learn their views about international and domestic politics, economics and other front-burner topics. Our newly updated Global Indicators Database serves as an interactive repository of these findings. You can use the database to explore public opinion around the world by country, region, subject area and year.

Here are five noteworthy trends in global public opinion, drawn from the database: 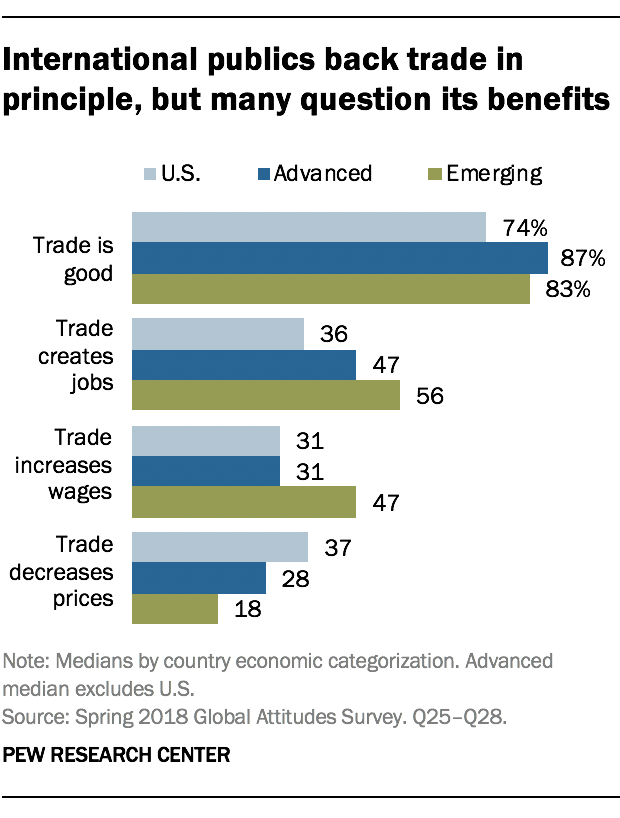 While most see trade positively in principle, far fewer believe that increased trade will bring specific benefits, such as more jobs, higher wages or lower prices, a September 2018 Pew Research Center report found. People in advanced economies are especially skeptical of the role of trade in boosting wages: A median of just 31% across 18 advanced economies believes this is the case, compared with 47% across nine emerging economies.

Explore data on global views about politics, economics and other topics.

4Russia’s standing among Europeans has slipped. Views of Russia were at their most positive in several European countries in 2011, but they have fallen since then and have remained consistently low over the past few years. Between 2011 and 2018, the share of people with a favorable opinion of Russia declined by double digits in France, Germany, Poland, Spain and the UK. The biggest drop occurred in the UK, where just 22% of the public now sees Russia favorably, down from 50% in 2011. As of 2018, no more than 35% of the public in any of these five countries holds a favorable view of Russia.

While attitudes toward Russia tend to be negative in Europe, many people in the region simultaneously see Russia playing a more important role on the world stage compared with a decade ago. Around half of adults in France (51%) and the UK (48%) say this – far more than the share in each country who say Russia is playing a less important global role than a decade ago.

Far more people globally cite the U.S. over China when asked which country they prefer to be the world’s leading power: A 25-country median of 63% prefer the U.S., compared with just 19% who prefer China. At the same time, far more people believe China’s role is on the rise than say the same about the U.S.: A median of 70% say China plays a more important role globally than it did a decade ago, compared with 31% who say this about the U.S.