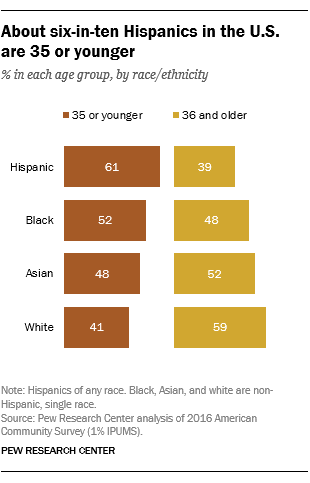 Youth is a defining characteristic of the U.S. Latino population. About six-in-ten Latinos (61%) in the U.S. were 35 or younger in 2016. The number of young Latinos –35 million – increased 20% from a decade earlier, making it one of the largest and fastest-growing youth populations in the country. With a median age of 28, Latinos are also the nation’s youngest major racial or ethnic group. Here are some key facts about them:

1Young Latinos are largely U.S. born. The U.S. born account for 81% of Latinos ages 35 or younger in 2016, compared with 42% of Latinos ages 36 or older. Those born in the U.S. are particularly young: With a median age of 20, many U.S.-born Latinos have not fully entered adulthood.

2The population of the youngest Latinos, those under 18 years old, grew by 22% from 2006 to 2016, a Pew Research Center analysis of Census Bureau data finds. This growth helped keep the nation’s youth population steady at about 73 million over the past decade. During this time, the under-18 population of whites and blacks declined by 11% and 7%, respectively. Among Asian Americans, a group with a fast-growing population overall, the number of people under 18 years old jumped by 21%. But at 3.5 million, this group is far smaller than the under-18 Hispanic population (18.3 million).

English use is on the rise among young Hispanics. Still, about six-in-ten say they use Spanish, according to Pew Research Center’s 2016 National Survey of Latinos, which asked Hispanics to rate their own ability to speak and read Spanish and to speak and read English. Similar shares of young Hispanic adults are either English dominant (41%) or bilingual (40%), while 19% are Spanish dominant. By contrast, among Hispanics ages 36 and older, a lower share is English dominant (24%), with higher shares rating themselves bilingual (32%) and Spanish dominant (44%).

9Young Hispanic adults believe in core parts of the American dream. More than three-in-four Hispanics ages 18 to 35 (77%) said most people who want to get ahead can make it if they’re willing to work hard, while only about 23% said hard work and determination are no guarantee of success for most people. When asked about their children’s future, about 75% of Hispanics ages 18 to 35 said that when their children are adults, their standard of living will be much or somewhat better. 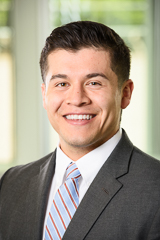