About two-thirds (64%) of Americans offer positive evaluations of the quality of candidates who have run for Congress in their district in recent years. But younger adults were less likely than older Americans – and partisans were more likely than independents – to say this, according to a Pew Research Center survey conducted earlier this year. 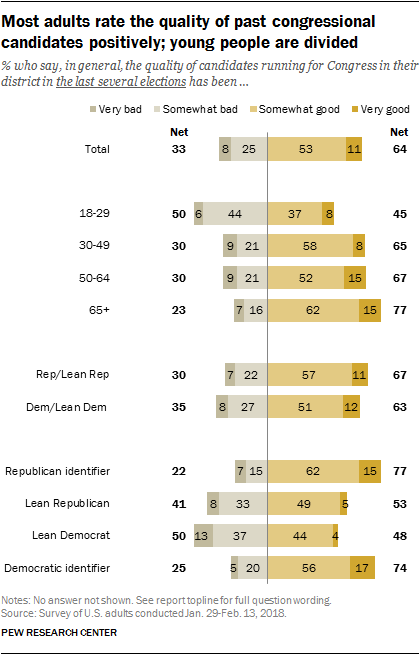 Overall, Republicans and Democrats were about equally likely to say their district’s past congressional candidate pool has been good, but there were substantial differences in these views between those who identify with the parties and those who lean toward a party. While 74% of Democrats said recent candidate pools were of high quality, just 48% of Democratic-leaning independents said the same, with a similar gap between the views of Republicans and GOP leaners.

There was also a substantial age gap in these views: Just 45% of adults younger than 30 said the quality of congressional candidates in their district’s last several elections was good. By contrast, more than six-in-ten of those in older age groups said this, including about three-quarters of those 65 and older (77%). Younger people also tended to offer more negative evaluations of past candidate pools for other levels of office. (The age gap is partly the result of younger people being less likely to identify as partisans, but a gap remains even when that is taken into account.) 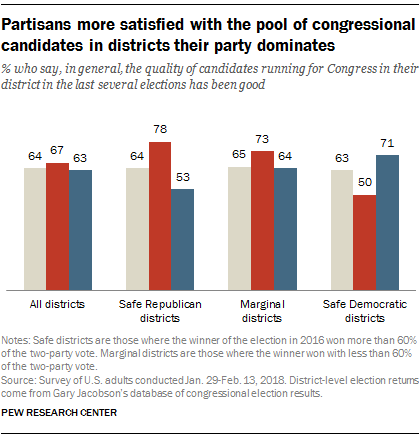 For instance, 78% of Republicans and Republican leaners living in districts that Republican candidates for Congress won by wide margins in 2016 said the quality of those who ran for Congress in the last several elections was very or somewhat good, compared with 53% of Democrats in these districts. Similarly, while 71% of Democrats and Democratic leaners in safe Democratic districts said candidate quality in their district had generally been good, that compares with just 50% of Republicans and Republican leaners in these districts.

There are modest partisan differences among those who live in districts where the winner of the congressional seat won with less than 60% of the two-party vote in 2016 – 73% of Republicans and Republican leaners in these districts said the quality of candidates has been good, while somewhat fewer Democrats in these districts (64%) said the same.