Americans’ views of the new tariffs between the United States and some of its trading partners tilt more negative than positive, a new Pew Research Center survey finds. 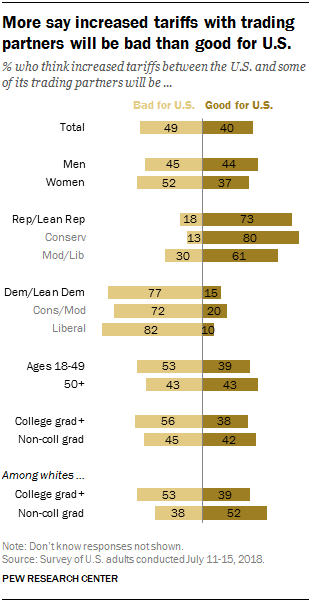 The debate over trade has registered widely with the public: 82% say they have heard either a lot (48%) or a little (34%) about the Trump administration’s decision to increase tariffs on goods from a number of countries – including China and Canada – and the tariffs those countries have placed on U.S. goods in response.

The survey, conducted July 11-15 among 1,007 adults, finds that attitudes toward the tariffs are deeply polarized. About seven-in-ten (73%) Republicans and Republican-leaning independents say increased tariffs between the U.S. and its trading partners will be a good thing for the country. Roughly the same share of Democrats and Democratic leaners (77%) say the increased tariffs will be a bad thing for the U.S.

Views on the tariffs now in effect differ by level of education. By 56% to 38%, college graduates think increased tariffs will be bad for the country. By contrast, those without a college degree are about as likely to say they will be good (42%) than bad (45%) for the U.S.

Among whites, educational differences are even more pronounced. Whites without a college degree are significantly more likely to think the tariffs will be good than bad for the U.S. (52% to 38%). Whites with a college degree take the opposite view: More expect them to be bad (53%) than good (39%) for the country.

Among both Republicans and Democrats, there are also differences in views of the tariffs by ideology.

Eight-in-ten conservative Republicans and Republican leaners think the increased tariffs between the U.S. and its trading partners will be good for the country. A smaller majority (61%) of moderate and liberal Republicans say the same.

Similarly, among Democrats and Democratic leaners, liberals (82%) are more likely than conservatives and moderates (72%) to say they expect the increased tariffs to be bad for the U.S. 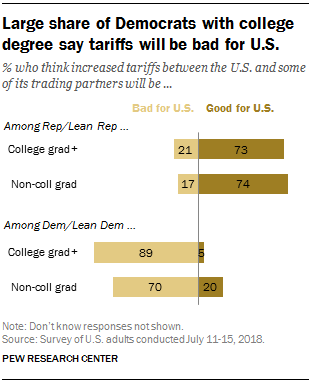 Among Republicans, comparable majorities of those with (73%) and without (74%) a college degree think the tariffs will be good for the country.