Republicans and Democrats give their own parties only mixed ratings for how well they do in standing up for some traditional party positions, according to a national survey conducted by Pew Research Center earlier this month. 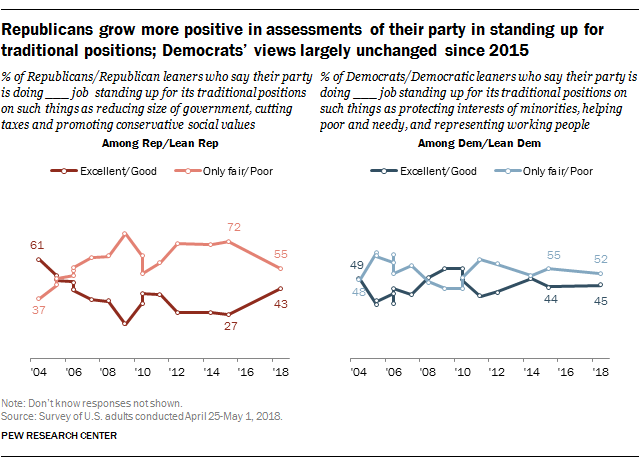 Fewer than half (45%) of Democrats and Democratic-leaning independents say the Democratic Party does an excellent or good job in standing up for such traditional party positions as “protecting the interests of minorities, helping the poor and needy and representing working people.” Slightly more (52%) say the party does only a fair or poor job in advocating these positions.

Similarly, 43% of Republicans and Republican leaners say their party does an excellent or good job in standing up for traditional GOP positions such as “reducing the size of government, cutting taxes and promoting conservative social values,” while 55% say the party does only a fair or poor job. 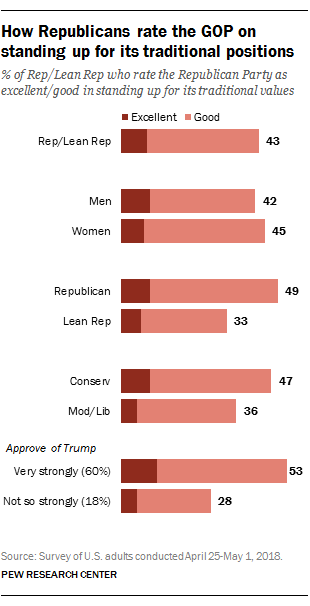 For Republicans, these views represent an improvement since 2015, when just 27% gave their party positive marks for standing up for its traditional positions. Democrats’ views of their party are little changed since then, but are less positive than in April 2009, during Barack Obama’s first year as president. At that time, 55% of Democrats and Democratic leaners gave their party positive ratings for standing up for its traditional positions.

In both parties, those who identify with a party are more likely than those who only lean toward the party to give it positive ratings. A separate recent Pew Research Center survey found a similar pattern in both parties, with more partisans than leaners expressing favorable views of their own parties.

Among Republicans and Republican-leaning independents, conservatives (47%) are more likely than moderates and liberals (36%) to express positive opinions about the way the GOP stands up for its traditional positions.

In addition, black and Hispanic Democrats are more likely than whites to say the Democratic Party is doing an excellent or good job in standing up for its traditional positions.