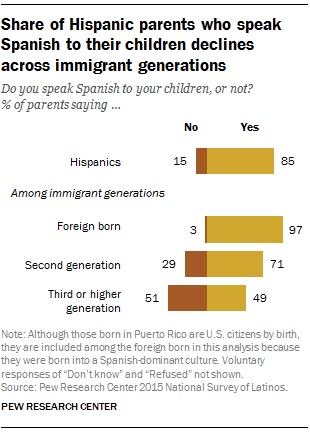 Key facts about young Latinos, one of the nation’s fastest-growing populations
A majority of English-speaking Hispanics in the U.S. are bilingual
Rise in English proficiency among U.S. Hispanics is driven by the young
Latinos are more likely to believe in the American dream, but most say it is hard to achieve
Is speaking Spanish necessary to be Hispanic? Most Hispanics say no
Biden Nears 100-Day Mark With Strong Approval, Positive Rating for Vaccine Rollout
What the data says about gun deaths in the U.S.
Quiz: Are you a Core Conservative? A Solid Liberal? Or somewhere in between?
What We Know About Gen Z So Far
Most Democrats and Republicans Know Biden Is Catholic, but They Differ Sharply About How Religious He Is