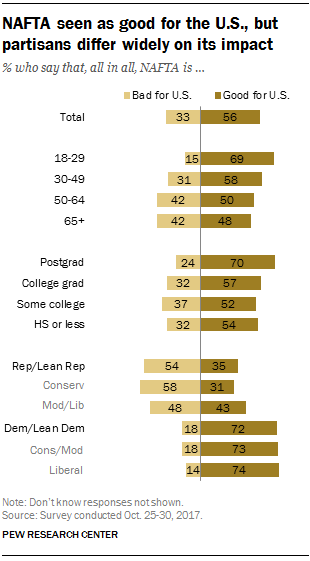 As Mexico prepares to host the fifth round of negotiations over the 23-year-old North American Free Trade Agreement (NAFTA), most Americans (56%) say that the pact is good for the United States, while just a third (33%) say it is bad.

And while President Donald Trump has raised questions about the fairness of the agreement, relatively few say that Mexico (30%) or Canada (20%) benefit more from the agreement than the U.S. does, according to a Pew Research Center survey conducted Oct. 25-30 among 1,504 adults.

Republicans are more likely than Democrats to say the trade pact is bad for the U.S. and that it has benefited Mexico, in particular, more than the U.S. In recent years, partisans have moved apart in their assessments of free trade agreements generally as Republicans have grown more negative in their views, and opinions about NAFTA today reflect this partisan dynamic.

Views of NAFTA are more positive than negative across most demographic groups. Assessments are especially positive among those with a postgraduate degree (70% good for U.S.) and adults ages 18 to 29 (69%). 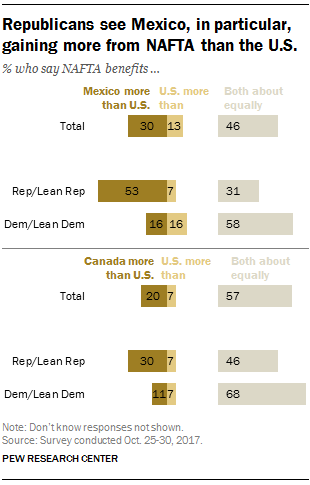 Most Democrats and Democratic leaners (58%) think that NAFTA benefits the U.S. and Mexico about equally. Just 16% of Democrats think Mexico benefits more – less than half the share of Republicans who say this. Another 16% say the U.S. benefits more from NAFTA than Mexico.

More Republicans say the U.S. and Canada benefit about equally from NAFTA than say the same about the U.S. and Mexico (46% vs. 31%). However, a sizable majority of Democrats (68%) say the trade pact has been beneficial to both the U.S. and its northern neighbor.

In a survey this spring, people in Canada and Mexico were more likely than Americans to say NAFTA has been a good thing for their countries.