President Donald Trump embarks on a five-country tour of Asia this week with plans to address North Korea’s nuclear program, economic relations and other issues important to the region and the United States. Over 12 days, Trump will travel to Japan, South Korea, China, Vietnam and the Philippines. While majorities in the region hold favorable views of the U.S., most disapprove of several of Trump’s signature policies, according to a Pew Research Center survey conducted in the spring.

Here are key findings related to Trump’s trip to Asia: 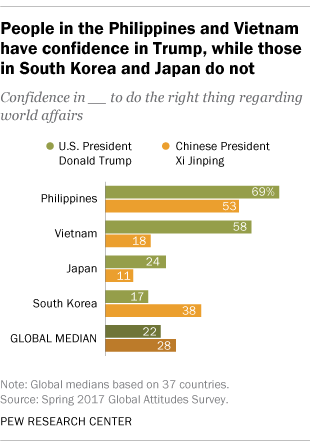 Asian nations are divided when it comes to having confidence in Trump. Globally, a median of just 22% say they are confident Trump will do the right thing when it comes to international affairs. But of all 37 countries the Center surveyed, Trump’s greatest support comes from the Philippines, where 69% say they have confidence in him. A majority of people in Vietnam (58%) also express confidence in Trump. The shares are much smaller in Japan (24%) and South Korea (17%). In these two countries, confidence in the U.S. president is down dramatically from the end of the Obama administration. South Korea, for example, has seen a 71-percentage-point drop in confidence in the U.S. president since 2015. 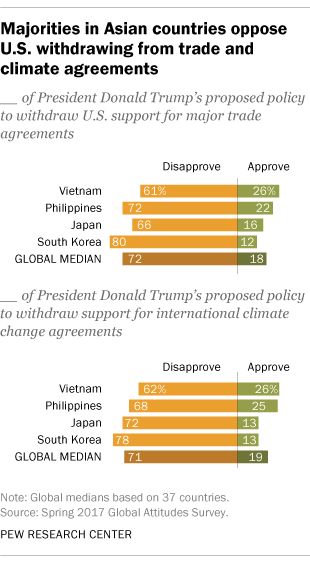 Most oppose Trump policies that withdraw U.S. support for major trade and climate change agreements. Globally, a median of 72% disapprove of Trump’s proposal to withdraw the U.S. from major international trade pacts. Majorities in Japan (66%) and Vietnam (61%) hold this view, as do 72% in the Philippines and 80% in South Korea. The survey was conducted after Trump signed an executive order withdrawing the U.S. from the Trans-Pacific Partnership free trade agreement, of which Vietnam and Japan are signatories.

Attitudes diverge on how to best deal with North Korea’s weapons program. A majority in Japan (61%) prefers increasing economic sanctions, as do around half of South Koreans (51%). Those in Vietnam and the Philippines, on the other hand, lean toward deepening ties with North Korea (43% and 45%, respectively). 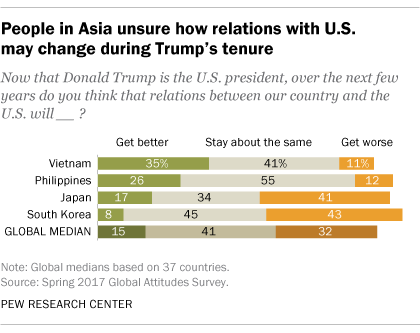