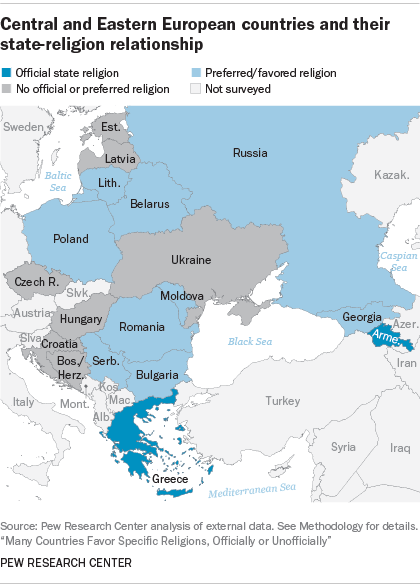 Atheist regimes dominated much of Central and Eastern Europe until the fall of the Iron Curtain and collapse of the Soviet Union between 1989 and 1991. Today, however, many of the governments in the region have an official state religion or an unofficial preferred faith.

In such countries, people are more likely to see religion and national identity as entwined, compared with citizens of neighboring Central and Eastern European states that lack official or favored faiths, according to a new Pew Research Center analysis.

Residents of states with official or favored religions also are more likely to support government subsidies and a public policy role for their country’s predominant church.

Of the 18 countries the Center recently surveyed in the region, two (Armenia and Greece) have an official state religion. Nine others, including Russia and Poland, unofficially “prefer” a religion, bestowing disproportionate benefits on a particular religious group, although they do not officially recognize it.

Across these countries, a median of 66% say being a member of the official or favored faith is very or somewhat important to national identity (e.g. “being truly Armenian”). In most countries without an official or preferred religion, substantially smaller shares (median of 43%) say this about the dominant religious group in their country.

By comparison, in countries where there is no officially recognized or preferred religion, generally smaller shares tend to agree that religion and national belonging go hand in hand, including in Ukraine (51%), Hungary (43%) and Latvia (11%).

There are, however, some outliers to this general trend. For instance, in the former Yugoslav republic of Bosnia, a religiously diverse country without an official or preferred religion, 59% say belonging to the faith group with which they personally identify (be it Muslim, Catholic or Orthodox) is important to being truly Bosnian. And, in neighboring Croatia, which also does not have a favored church, 58% say being Catholic is important to being Croatian.

Despite perceived ties between faith and national belonging, majorities in four of 11 Central and Eastern European countries with an official or preferred religion actually favor separation of church and state. This includes seven-in-ten Poles, 62% of Greeks and roughly the same proportion of Moldovans and Serbs (59% each). The public is relatively more split on the issue in Belarus, Bulgaria and Russia, where 50% favor keeping religion separate from government policy, while 42% in each country say governments should promote the spread of religious values and beliefs in their country.

Only in Armenia and Georgia do more (59% and 52%, respectively) say the state should promote religious values and beliefs in the country.

In all seven Central and Eastern European countries surveyed where there is no official or preferred religion, solid majorities favor keeping religion and the government separate.  For instance, in Bosnia – which experienced ethnic and religious violence in the 1990s – 76% of the public favors separation between religion and government. And, in Croatia, another former Yugoslav republic that experienced ethnic and religious violence, roughly seven-in-ten (69%) say the same.

People in countries with an official or preferred religion also are somewhat more likely (median of 53% vs. 40%) than those living elsewhere to support government funding of the dominant church in the country. For example, eight-in-ten Georgians (82%) think the Georgian Orthodox Church – the nation’s preferred religion – should receive financial support from the government. By contrast, in Latvia, which has no official or preferred church, fewer than a third (30%) of adults say that their country’s largest church, the Evangelical Lutheran Church of Latvia, should receive funding.

Two countries – Greece and Poland – buck this trend. In Greece, only 18% of people favor government funding for the country’s official Greek Orthodox Church. And in Poland, only 28% say the government should provide money to the country’s preferred Catholic Church.