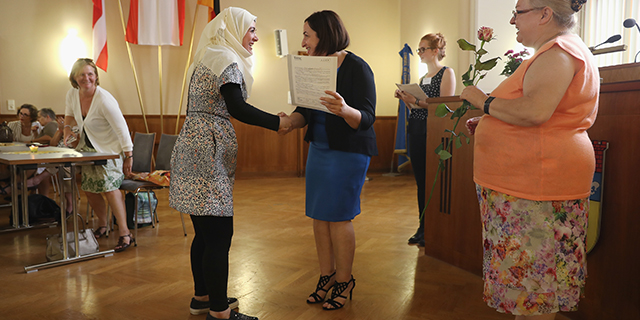 BERLIN, GERMANY – JULY 11: Berlin State Senator for Work, Integration and Women Dilek Kolat (C, in blue) awards Syrian refugee Marwad Khaled a certificate of completion for A1 beginner’s level of German language study at a ceremony at the Charlottenburg-Wilmersdorf district city hall in which several dozen refugees received their certifictaes on July 11, 2016 in Berlin, Germany. The city of Berlin alone has absorbed tens of thousands of refugees over the last year and is financing German language study for 22,000 of them. Germany is seeking to raapidly integrate the hundreds of thousands of refugees who have or will be granted asylum in the country, for which German language competence is crucial. (Photo by Sean Gallup/Getty Images)