A new analysis of a Pew Research Center telephone survey finds that many respondents incorrectly identify their telephone interviewer’s race or ethnicity.

The survey, conducted Feb. 29-May 8, 2016, among 3,769 adults, focused primarily on the topic of race relations, racial equality and discrimination.

Interviewers were instructed to ask the following question at the end of the survey: “You may not have thought about this … but if you had to guess, would you say I am white, black, Hispanic, Asian or some other race? Just your best guess is fine.” 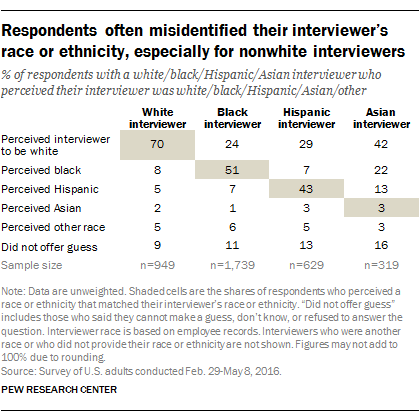 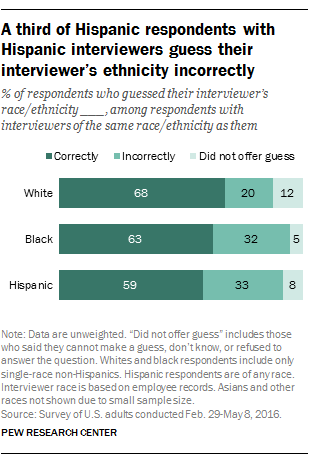 Respondents who were the same race or ethnicity as their interviewer often were more likely than respondents not of that race or ethnicity to guess correctly, but still sometimes got it wrong. For example, 59% of Hispanic respondents with a Hispanic interviewer guessed correctly, while one-third guessed incorrectly and 8% said they could not make a guess, didn’t know or refused to answer. By comparison, just 23% of non-Hispanics with Hispanic interviewers guessed correctly, 58% guessed incorrectly and 18% didn’t offer a guess.

Why this matters in surveys

Previous studies have found that both black and white respondents tend to report more favorable attitudes toward blacks when speaking to a black interviewer, and less positive attitudes toward blacks when speaking to a white interviewer. This is thought to be a form of the so-called social desirability effect, in which most respondents want to avoid offending the “polite stranger” who has called them on the phone or visited them at their home by expressing mistrust or hostility toward people who share the interviewer’s race or ethnicity.

Most studies in this area have focused on the effect the interviewer’s race has on race-related questions, but there is also some evidence that this effect could extend to other topics such as voting and political knowledge.

The social desirability dynamic makes it all the more important to understand how accurately respondents perceive their interviewers. 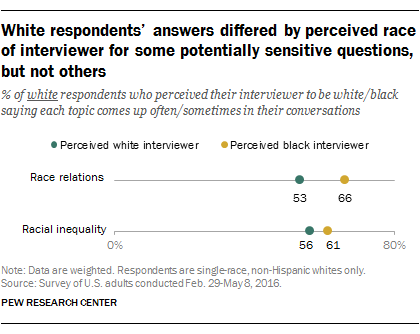