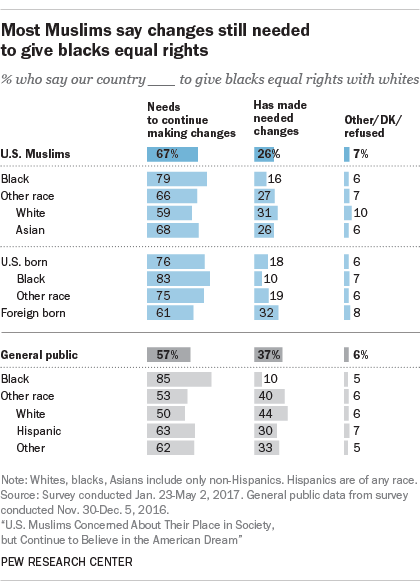 Two-thirds of Muslims in the United States (67%) say the country needs to continue making changes to give blacks equal rights with whites, a higher percentage than the share of Americans in general who say this (57%).

Muslim Americans are also more likely than the general public to say there is a lot of discrimination against black people in the U.S. About seven-in-ten U.S. Muslims (71%) say this, compared with 59% of the overall population, according to a 2017 Pew Research Center survey. 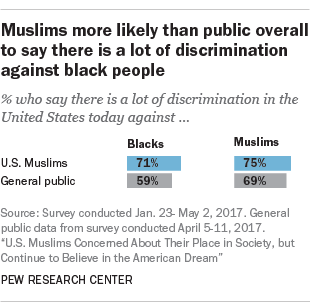 Partly this is because black people make up a sizable share of the U.S. Muslim population. In the survey, 20% of U.S. Muslims identify racially as black alone, while another 3% identify as black and another race or as black and Hispanic. The share identifying as black alone is significantly higher than among the general public (12%), according to the U.S. Census Bureau’s 2016 Current Population Survey.

Still, even when those who identify solely as black are excluded, U.S. Muslims are more likely than Americans overall to say more changes are needed for black people to have equal rights with whites (66% vs. 53%) and are more likely to say there is a lot of discrimination against blacks (66% vs 56%).

Among Muslims, those born in the U.S. are more likely than those born elsewhere to say more needs to be done for black people to have equal rights with whites (76% vs. 61%). This is true for Muslims born in the U.S. who are black (83%) and of those of other races (75%). And U.S. Muslims with a college degree are more likely to feel this way than those with a high school diploma or less (74% vs. 59%).

For Muslims who said the U.S. must keep making changes for black people to have equal rights with whites, the Center’s survey asked a second question: Will the country actually make those changes one day? Among Muslims who believe that more change is needed, 57% said they thought the U.S. will eventually make those changes. In a separate 2016 survey, 69% of the general public who said they believe more change is needed went on to say these changes will be made eventually.