A growing number of high-skilled foreign workers find jobs in the United States under a program known as Optional Practical Training (OPT), which allows foreign graduates from U.S. universities to work in the country on a temporary basis. The federal government approved nearly 700,000 OPT applications in fiscal years 2008 through 2014, according to a Pew Research Center analysis of U.S. Immigration and Customs Enforcement data received through a Freedom of Information Act request. Data suggest that the total number of foreign graduates using OPT may continue to increase in subsequent years: More than 1 million foreign students studied at U.S. higher educational institutions in the 2015-16 school year, a record high.

U.S. college graduates with F-1 visas for foreign students may apply to OPT, and those approved may work in the U.S. for up to 12 months in their field of study. Foreign students majoring in a science, technology, engineering and mathematics (STEM) field may work in the U.S. for longer – up to 36 months. Unlike other U.S. visa programs, OPT has no cap on the number of foreign graduates who can participate. OPT is not subject to congressional oversight, though the program, which was created in 1947, can be changed by a U.S. president.

Here are some key facts about foreign college graduates working in the U.S. under the Optional Practical Training program. 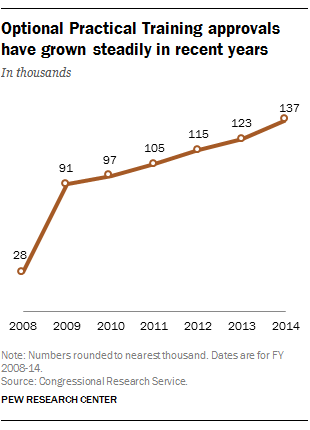 The annual number of OPT approvals rose from 28,497 in fiscal 2008 to 136,617 in fiscal 2014, a nearly fivefold increase. This growth happened after the Bush administration in 2008 extended the amount of time STEM graduates may work in the U.S. to a maximum of 29 months. About half of STEM graduates have extended their OPT program beyond the initial 12-month period in recent years. In 2016, the Obama administration again expanded the work period for STEM graduates to its current 36-month maximum.

3STEM graduates made up nearly half (49%) of all those who were approved for OPT and were seeking employment in calendar years 2012 through 2015. STEM degrees accounted for six-in-ten of the most numerous majors among OPT approvals, with the remaining four in business-related fields. The three most common majors during this period were business administration and management (37,289), electrical and electronics engineering (26,873) and computer science (25,471). 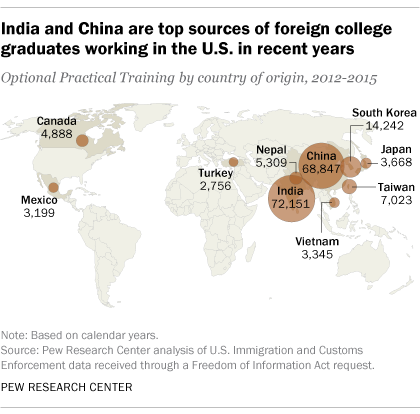 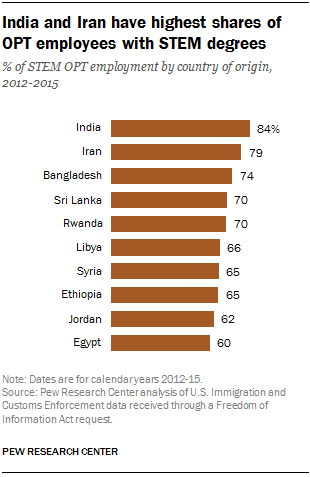 Graduates in STEM fields accounted for at least 70% of OPT approvals from India, Iran, Bangladesh and Sri Lanka from 2012 to 2015. Of the 72,151 from India employed under OPT, 84% had STEM degrees, the highest percentage of any origin country. Iran (79%), Bangladesh (74%) and Sri Lanka (70%) also had high shares of STEM graduates. Among those from China, 54% went to STEM graduates.