Through both recession and recovery, the share of young adults living in their parents’ home continues to rise. Today’s young adults are also more likely to be at home for an extended stay compared with previous generations of young adults who resided with their parents, according to a Pew Research Center analysis of U.S. census data.

The living arrangements data are based on the Census Bureau’s Annual Social and Economic Supplement, collected in March. These data also serve as the basis for the nation’s long-running statistics on geographic mobility. Using the mobility information provides some insight into the extent to which the nation’s young adults are moving in and out of certain living arrangements. (The supplement does not accurately capture moves to and from college dormitories and may not accurately estimate the mobility of a population likely to live in a dorm. That is why 18- to 24-year-olds are not included in this analysis.) 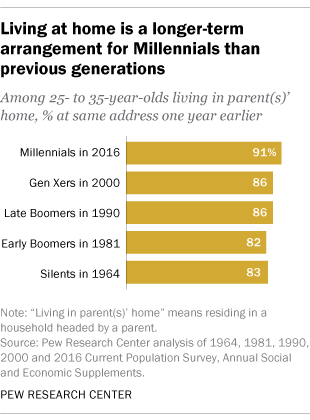 Millennials – whether living with their parents or not – are moving significantly less often than earlier generations of young adults. Among 25- to 35-year-old Millennials who were living at home in 2016, 91% reported that they resided at the same address one year earlier. This does not preclude the possibility that the young adult moved out and “boomeranged” back in the intervening year (perhaps multiple times); the data simply indicate that they lived with their parent or parents one year earlier as well.

Other estimates of the length of time young adults spend living with their parents show the same trend. 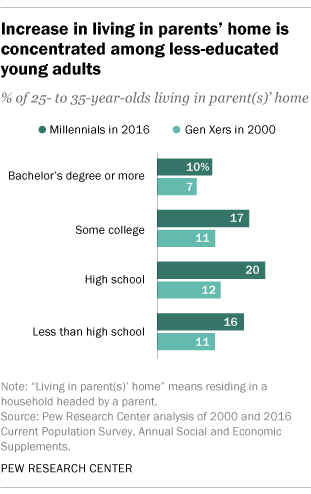 The increased prevalence of living with mom and/or dad is more prominent among less-educated young adults. In 2016, only 10% of Millennials who had completed at least a bachelor’s degree lived at home, compared with 7% of college-educated Gen Xers who lived at home in 2000. By contrast, 20% of young adults with no more than a high school diploma lived in their parents’ home in 2016, up from 12% of Gen Xers in 2000.

A variety of factors may influence young adults’ decisions to live at home, including their success in the labor market, the cost of living independently, and their debt obligations. The fact that less-educated young adults are much less likely to live independently than their more educated counterparts comports with the basic patterns of employment success in the U.S. labor market. Wages and employment have declined for less-educated young adults since the 1970s, whereas young college-educated workers have experienced improving outcomes in the job market, especially for those with advanced degrees. Young adults with higher wages are less likely to be living at home.