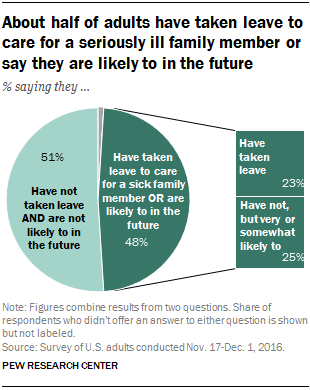 About one-in-four Americans (23%) say there has been a time when they took leave from work to care for a family member with a serious health condition. An additional one-in-four say that if this hasn’t happened to them already, it’s at least somewhat likely that it will in the future.

The current debate over paid leave often focuses on maternity and paternity leave. Yet among adults who were employed in the past two years, more took time off from work to care for a sick family member (11%) than did so following the birth or adoption of a child (7%), according to a new Pew Research Center study.

Roughly two-thirds of all adults (67%) say workers should receive paid leave when they need to take time off to care for a sick family member, and most (60%) of those who took family leave in the past two years say they did receive at least partial pay while they were out of work. But the vast majority of those who received at least partial pay (86%) say some of that pay came from vacation, sick leave or personal time off. Relatively few of these workers (15%) say they received pay from a family and medical leave benefit provided by their employer. Workers who took maternity or paternity leave with at least some pay in the past two years are significantly more likely to report that they were paid, at least in part, through an employer-provided family or medical leave policy (28%). 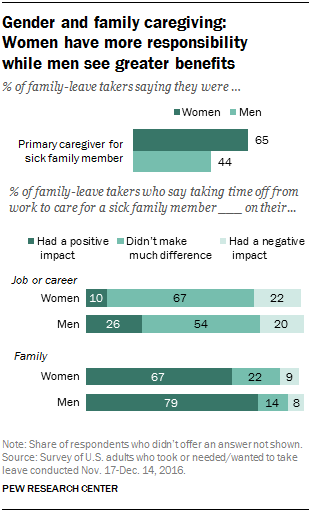 However, women and men who were employed in the past two years are equally likely to say that they have taken time off to care for a sick family member during that time, but women report having taken slightly more time off, on average, than men. And women are much more likely than men to say that they were the primary caregiver for their sick family member. Roughly two-thirds (65%) of female family-leave takers say they provided more care for their sick family member than anyone else in the family. Only 44% of male family-leave takers say they were the main caregiver.

Among all workers who have taken time off from work in the past two years to care for a sick family member, about six-in-ten say the experience did not have much of an impact on their career. For those who do think it made a difference, men are more than twice as likely as women to say the impact on their career was positive (26% vs. 10%). Men are also more likely than women to say their family benefitted from their taking time off from work: 79% of men, compared with 67% of women, say taking time away from work to care for a sick family member had a positive impact on their family.

Key takeaways on Americans’ views of and experiences with family and medical leave
Why workers don’t always take family or medical leave when they need to
As coronavirus spreads, which U.S. workers have paid sick leave – and which don’t?
About one-in-seven Americans don’t think men should be able to take any paternity leave
The pandemic has highlighted many challenges for mothers, but they aren’t necessarily new