This year marks the 100th anniversary of the U.S. government granting American citizenship to the residents of Puerto Rico. The island became a U.S. territory in 1898 after Spain ceded control of it following the Spanish-American War. However, Puerto Ricans did not gain U.S. citizenship until Congress passed the Jones-Shafroth Act in 1917.

Today, Puerto Rico is a U.S. territory with its own constitution and government (though the extent of the island’s legal independence from the United States has been the subject of debate). Island residents elect their own governor and members to the island’s legislature, but they may not vote in U.S. general elections for president and they do not have a voting member of Congress.

Here are answers to some key questions about Puerto Rico based on previously published Pew Research Center reports.

How many people live in Puerto Rico? 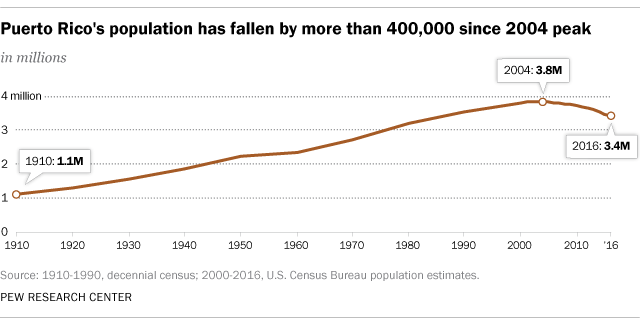 Puerto Rico’s population has grown steadily since at least the 1700s, and it increased each decade between 1910 (1.1 million) to 2000 (3.8 million). The population grew even during the Great Migration that occurred after World War II and into the 1960s, when hundreds of thousands left the island for the mainland.

Why is Puerto Rico’s population declining? 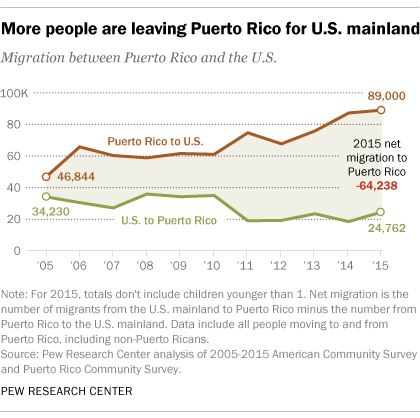 A decadelong economic recession has contributed to a historic number of people leaving Puerto Rico for the U.S. mainland. Between 2005 and 2015, Puerto Rico had a net loss of about 446,000 people to the mainland, with job-related (40%) and family or household reasons (39%) cited as primary causes among a plurality of those leaving.

Puerto Rico’s population losses have affected nearly every county, or municipio, on the island. The population of San Juan, Puerto Rico’s capital and largest metro area, declined by 40,000 people (-10%) between 2005 and 2015, to 355,000, by far the largest numeric drop of any municipio.

Many people who leave Puerto Rico move to Florida, where the population of Hispanics of Puerto Rican origin surpassed 1 million in 2014. In recent years, more than a third of people who moved to the mainland from Puerto Rico settled in Florida. 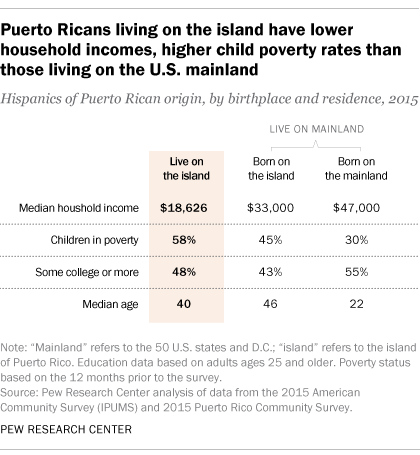 Among island-born Puerto Ricans living on the mainland, about half (53%) identified as Catholic in a separate 2013 survey of U.S. Hispanics. Three-in-ten identified as Protestant, most of whom (62%) say they are born-again or evangelical.

How do the views of Puerto Ricans on the island and those on the mainland differ?