The relationship between businesses and their employees is back in the news, with low-wage laborers recently protesting and striking for a higher minimum wage and independent contractors in the sharing economy suing for expanded rights. But for consumers, how important is it to know about working conditions at the businesses they frequent, and what impact does this knowledge have on their shopping decisions? 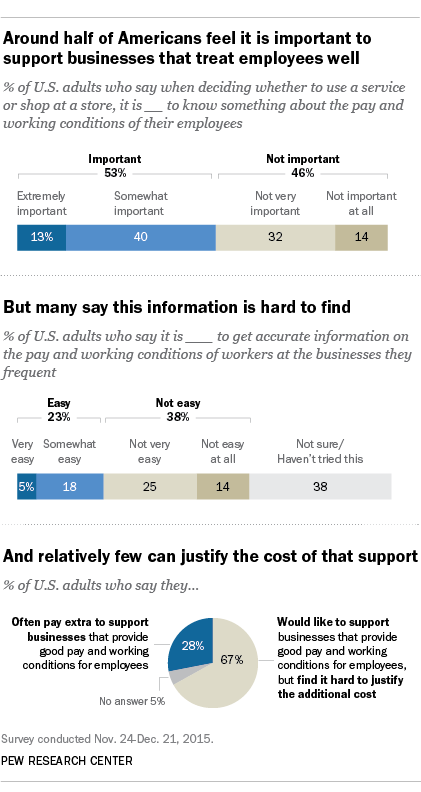 Around half of Americans say the question of working conditions is indeed important to them, though fewer are actually willing to pay more to support businesses that are seen as worker-friendly, according to a Pew Research Center survey conducted in late 2015.

A little more than half (53%) of U.S. adults say that when deciding whether to use a particular service or shop at a particular store, it’s important for them to know something about the pay and working conditions of those who work there. But only a slightly smaller share (46%) say that worker treatment is not important to their purchasing decisions.

Finding out how companies treat their workers can be difficult for many Americans. Only around a quarter (23%) say it is easy to get accurate information about employee pay and working conditions at the businesses they frequent. But even when they are able to identify businesses that provide good pay and working conditions, about two-thirds of U.S. adults (67%) say it is hard to justify the additional cost involved in supporting such companies. Only around one-quarter (28%) report that they often pay extra to support these types of businesses.

Even many Americans who say it’s important to know how workers are treated find it hard to justify the extra cost of supporting businesses that provide good pay and working conditions. Among those who say that worker pay and conditions are important to them, 41% say they regularly pay extra to support businesses that treat their employees well, but 56% indicate it is hard to justify the additional cost.

Questions about the minimum wage or employee benefits often break along political lines, and there are partisan differences on this issue as well. Democrats and independents who lean toward the Democratic Party are more likely than their Republican and Republican-leaning counterparts to say that worker pay and conditions are important to their purchasing decisions (62% vs. 42%). But even as they place greater importance on this issue, a minority of both Democrats (35%) and Republicans (22%) say they often pay extra to support businesses that provide good pay and working conditions to their employees.

See the topline results and methodology used for this post.