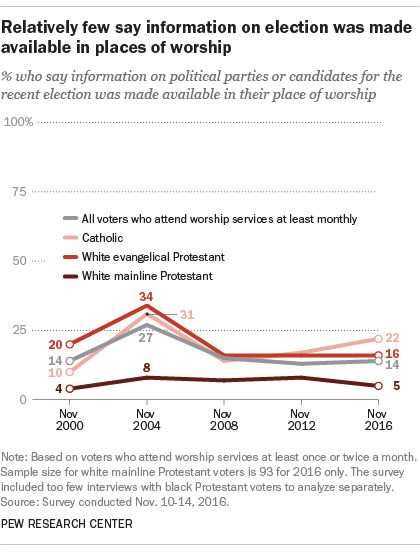 The tumultuous presidential campaign may have dominated conversation in other walks of life this year, but there was little explicit discussion about the election or the candidates in America’s houses of worship, according to new Pew Research Center survey data.

Among voters who report attending religious services at least once a month, relatively few say information on political parties or candidates was made available to them in their places of worship (14%), and even fewer say they were encouraged to vote in a particular way by their clergy (5%). Similarly, very few voters overall say they were contacted by religious organizations about the election (6%).

Catholic and white evangelical Protestant voters are somewhat more likely than white mainline Protestant voters to say information related to the election was available in their places of worship. Roughly one-in-five Catholics who attend Mass at least monthly (22%) say information on political parties or candidates was made available in their parishes this year, while 16% of white evangelical Protestants who attend church monthly say this. By comparison, only 5% of white mainline Protestants who attend church monthly received election-related information through their places of worship. (Other religions are not included in this analysis because of insufficient sample sizes.) 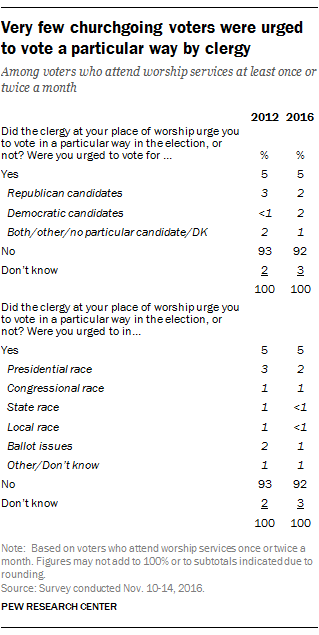 Among all voters who attend worship services monthly or more, these figures are virtually unchanged from the 2012 and 2008 presidential election years. By contrast, 2004 saw an uptick in political discussions in churches, according to Pew Research Center polling, perhaps owing to the large number of state-level initiatives and referenda related to same-sex marriage on ballots that year.

This year, as in 2012, only a small share of voters who attend worship services regularly say clergy at their places of worship encouraged them to vote in a particular way, including 2% who say they were encouraged to vote for Republican candidates and 2% for Democratic candidates.

There is little difference in the shares of Protestants (4%) and Catholics (8%) who say their clergy encouraged them to vote in a particular way. 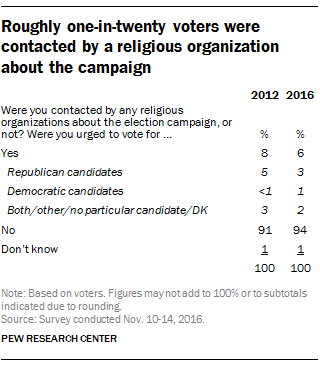 The First Amendment to the Constitution protects the right of churches and religious organizations to engage in political activity. But, under current tax law, churches that endorse or actively aid political candidates can lose their federal tax-exempt status. This same tax law does not prohibit religious groups from discussing political issues – such as abortion or immigration – and expressing their preference for one policy position over another.