Attainment of a four-year college degree in the United States, often regarded as a key asset for economic success, varies by race and gender. But the share of people completing a college education also differs by religion, with members of some faith groups much more educated, on average, than others.

By far, Hindus and Unitarian Universalists have among the largest share of those with a college degree – 77% and 67% respectively. Roughly six-in-ten Jews (59%) have college degrees, as do similar shares in both the Anglican church (59%) and the Episcopal Church (56%).

These groups are among the top of a list of 30 U.S. religious groups ranked by educational attainment based on data from our 2014 Religious Landscape Study. 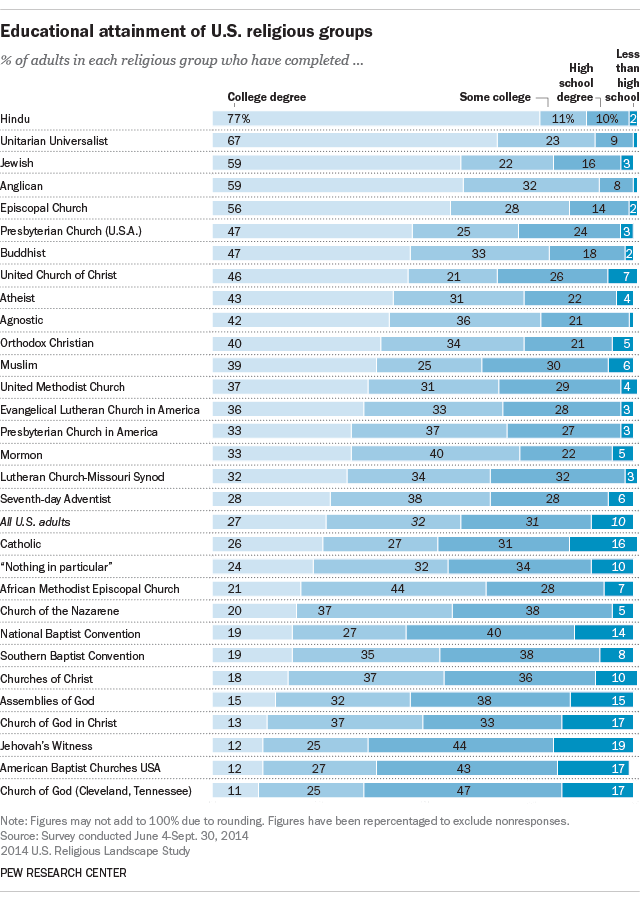 Given the strong correlation between educational attainment and economic success, it is not surprising that Jews and Hindus, on average, have high household incomes, with four-in-ten Jews (44%) and roughly a third of Hindus (36%) living in households with annual incomes of at least $100,000, according to the 2014 study.

Other religious groups also have a higher percentage of college graduates than the full sample of more than 35,000 U.S. adults surveyed in the 2014 Religious Landscape Study, among whom 27% completed university. They include Buddhists and members of the Presbyterian Church (U.S.A.) – both at 47% – as well as Orthodox Christians (40%), Muslims (39%) and Mormons (33%).

Since Catholics make up one-in-five adults, it is not surprising that their share of members with a college degree (26%) roughly mirrors that of the general public.

Our study also looked at educational attainment in three categories of religiously unaffiliated people. About four-in-ten atheists (43%) and agnostics (42%) have earned college degrees, as have nearly a quarter (24%) of those who say their religion is “nothing in particular.”