Among the vast majority of GOP voters who think that the growing number of newcomers to the U.S. “threatens traditional American customs and values,” 59% have warm feelings toward Donald Trump – with 42% saying they feel very warmly toward him. 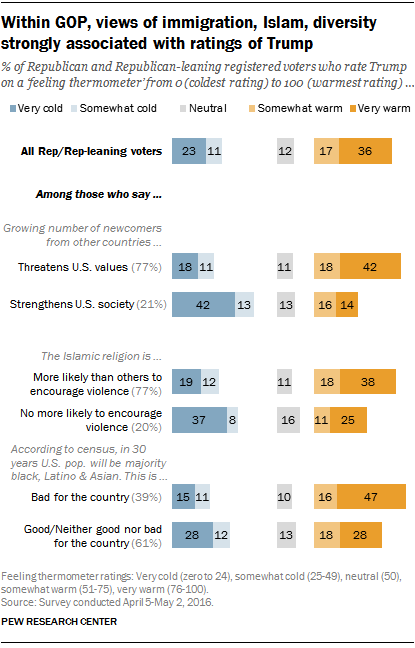 By contrast, among the much smaller share of Republican voters (just 21%) who say that the growing number of newcomers “strengthens American society,” half as many (30%) have warm feelings toward Trump, with only 14% feeling very warmly toward him.

An analysis of “feeling thermometer” ratings of Trump finds that attitudes about immigration, Islam and racial diversity are strongly associated with Republican voters’ views of the presumptive GOP presidential nominee.

Other political values – including opinions about whether the U.S. economic system is unfair and whether business profits are excessive – are less closely linked to feelings about Trump.

The survey, conducted online April 5-May 2 among 4,385 adults (including 1,701 Republican and Republican-leaning registered voters), finds that that just over half (53%) of all GOP voters give Trump a warm rating (a rating above 50), with 36% giving him a very warm rating (between 76 and 100).

Roughly a third (34%) give Trump a somewhat cold (11%) or very cold (23%) rating, while 12% rate him exactly 50 on the 0-100 point thermometer. (The survey was conducted on Pew Research Center’s nationally representative American Trends Panel.)

Among GOP voters who hold the view that the growing number of newcomers to the U.S. threatens American customs and values, 59% view Trump warmly, while just 28% give him cold thermometer ratings (below 50); 11% are neutral (rating him at exactly 50). Republican voters who say newcomers strengthen society are negative toward Trump – 56% rate him below 50 on the feeling thermometer, including 42% who give him a rating below 25.

Views about Islam and violence also are associated with feelings about Trump: Among the majority of Republicans (77%) who say that the Islamic religion is more likely than other religions to promote violence, 56% give Trump a warm rating, while just 32% rate him coldly. Feelings about Trump are less positive among the minority of Republicans who say Islam does not encourage violence more than other religions: Only 36% rate him warmly, while 45% view him coldly.

And among the minority of GOP voters (39%) who say it is bad for the country that “in the next 25 to 30 years African Americans, Latinos, and people of Asian descent will make up a majority of the population,” most express warm feelings toward Trump: 63% rate him warmly, including nearly half (47%) who rate him very warmly (76 to 100). Among this group of GOP voters, just 26% rate Trump coldly.

Most Republican voters (61%) say the transition to a majority-minority country is neither good nor bad (56%) or is a good thing (4%). Among these voters, feelings about Trump are more mixed: 46% feel warmly toward Trump, while 39% give him a cool or cold rating. 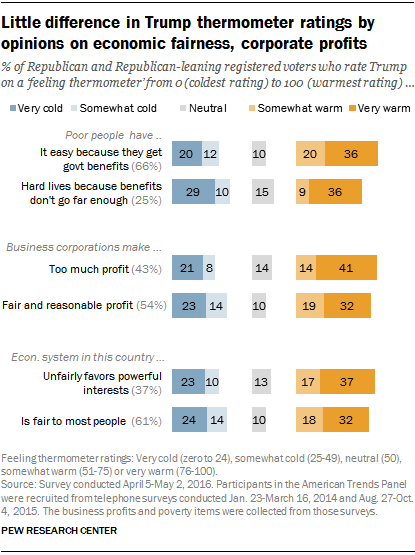 Among GOP voters who diverge over other issues, there are smaller differences in Trump’s thermometer ratings.

Trump is viewed positively by the large majority of Republicans (66%) who say that the poor “have it easy because they can get government benefits without doing anything in return.”

Among this group, 56% have warm feelings toward Trump, compared with about a third (32%) who have cold feelings. Among the one-quarter of Republicans who say the poor have it hard “because government benefits don’t go far enough to help them live decently,” views of Trump are more mixed (45% warm, 39% cold).

However, comparable majorities of Republican voters who say the economic system unfairly favors powerful interests, and those who see it as generally fair, have warm feelings toward Trump (54% and 50%, respectively). 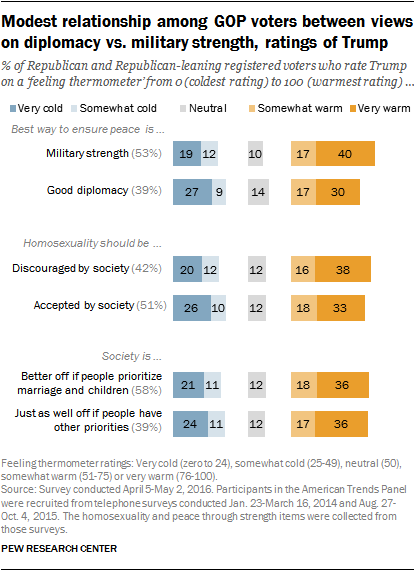 There is little relationship between Republicans’ views of some social issues and ratings of Trump. Those who say homosexuality should be discouraged by society and those who say it should be accepted are about equally warm toward the presumptive GOP nominee. And views about whether society is better off if people prioritize marriage and children similarly show no relationship to views of Trump. 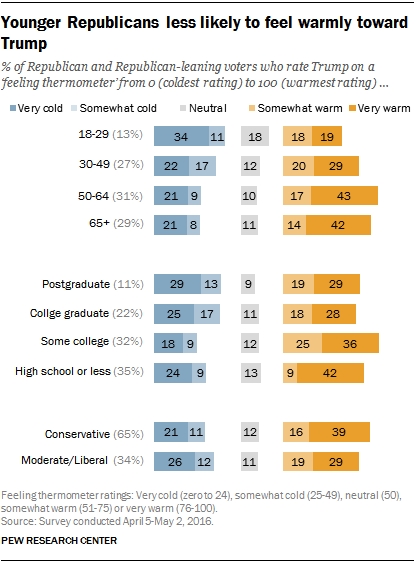 There are demographic differences among Republicans on many of these issues – and in views of Trump. For instance, Republicans younger than 30 are much less likely to say that immigrants to the United States threaten our values than those 65 or over (57% vs. 83%). Younger Republicans are also less positive in their assessments of Trump (37% warm vs. 56% among those 65 and older).

In addition to age, both education and ideology are associated with views of Trump within the GOP. Republican voters with less than a college degree –particularly those with some college experience – feel more warmly toward Trump than those with more education. And conservative GOP voters rate Trump higher than moderate and liberal GOP voters.

The above analysis evaluates the importance of different traits (age, gender) and opinions (such as views about Islam, or immigration) in support for Trump one by one, but it’s also possible to use a statistical technique known as regression analysis to look at the relative impact of these factors. 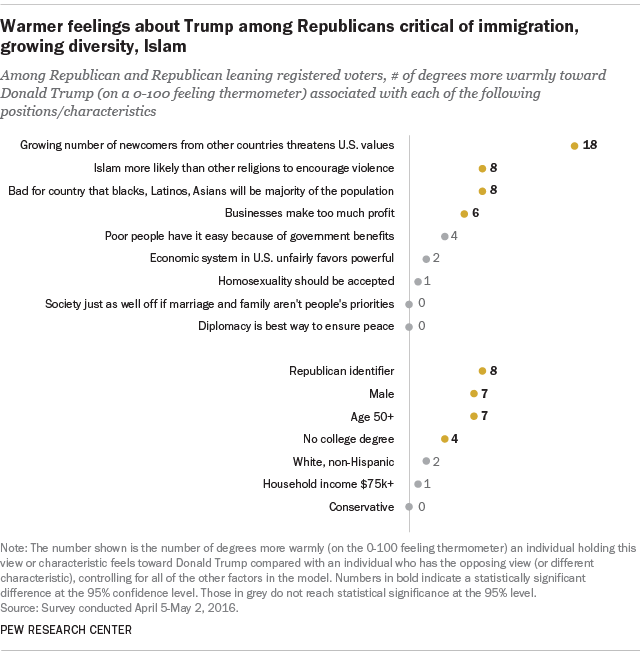 Regression analysis takes into account a range of traits and opinions at once, determining the relative impact of each if all the others were held constant. The results of this analysis confirm the findings above: Holding constant a variety of demographic traits and political values, the most powerful driver of views toward Trump is whether the respondent feels threatened by the increasing number of immigrants coming to the U.S.

Republican voters who say the greater number of newcomers to the U.S. from other countries threatens U.S. customs and values give Trump, on average, a rating that is 18 degrees warmer than among those who say newcomers strengthen the U.S.

There are also significant independent effects of viewing Islam as more violent than other religions (8 degrees more warmly toward Trump) and seeing the nation’s transition to a majority-minority country over the next three decades as a bad thing (8 degrees more warmly). Most other political values do not have a significant association with views of Trump. One exception is that – in this multivariate model – saying businesses make too much profit is associated with warmer views of Trump (6 degrees). Neither household income nor self-identified ideology is significantly related to feelings toward Trump.

Note: For the full survey methodology and topline, click here.