On Saturday evening, many American children will encounter costumed ghosts as they roam the streets in search of candy and other treats on Halloween. Before bedtime, to avoid nightmares, some parents may try to reassure their kids that ghosts are not real. 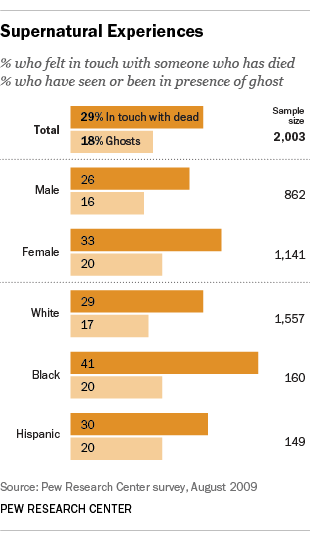 But not all of those parents may buy their own reassurances:  Nearly one-in-five U.S. adults (18%) say they’ve seen or been in the presence of a ghost, according to a 2009 Pew Research Center survey. An even greater share – 29% – say they have felt in touch with someone who has already died.

Claude Fischer, a professor of sociology at the University of California, Berkeley, explored Americans’ persisting beliefs in some supernatural phenomena in a 2013 blog post.

Despite the influence of modern secularism and science, he observed, “the magic has not totally gone.”