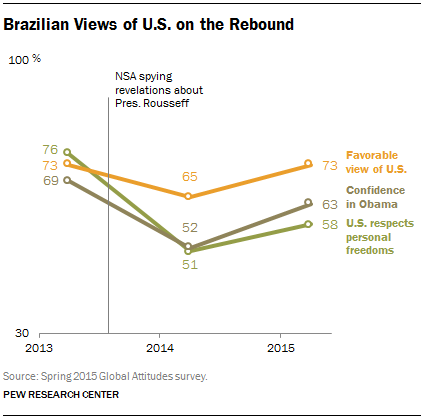 Revelations in September 2013 that the U.S. government had monitored the private communications of Brazil’s President Dilma Rousseff had strained relations between the two countries. But Rousseff’s arrival in the U.S. this week for a meeting with President Barack Obama comes at a time when public sentiment about the U.S. in Brazil has almost fully returned to the overwhelmingly positive opinions held before the surveillance controversy.

Rousseff originally had been slated to travel to Washington in October 2013, but she canceled that meeting to signal her displeasure over the National Security Agency monitoring.

Nearly three-quarters of Brazilians (73%) have a favorable view of the U.S. – the highest level of approval among the Latin American countries surveyed, according to a new Pew Research Center survey. Young people ages 18-29 (84%) and those with more education (80%) are especially likely to express pro-American sentiments. In our 2013 survey, fielded before the Edward Snowden revelations, 73% of Brazilians also had a positive view of the U.S. But ratings dropped 8 percentage points in 2014 to 65% before rebounding this year.

Brazilian confidence in Obama also dipped in 2014 but bounced back this year. More than six-in-ten Brazilians (63%) say they have confidence in Obama to do the right thing regarding world affairs, up 11 percentage points from last year. The current finding is more in line with pre-Snowden ratings from 2013, when 69% in Brazil expressed confidence in the American president. 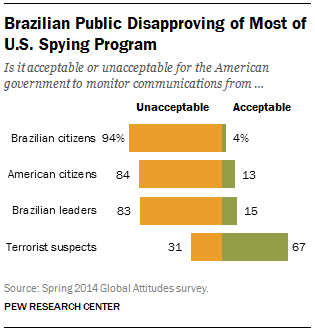 The NSA’s data surveillance programs undoubtedly played a large role in Brazil’s sour opinions of the U.S. When asked whether they found it suitable for the American government to monitor the communications of Brazil’s leaders, more than eight-in-ten Brazilians (83%) said this practice was unacceptable. Brazilians also voiced strong opposition to monitoring American citizens (84% unacceptable) and Brazilian citizens (94%).