On Valentine’s Day 10 years ago, a group of former PayPal employees founded YouTube as an easy way to find and share videos. Today it’s one of the most visited websites in the world and is widely used by news organizations, politicians and music artists. (Psy’s Gangnam Style has over 2 billion views, making it the most watched YouTube video of all time.)

Besides big brands, some regular users have amassed a large following. Recently, a trio of YouTube content creators interviewed President Barack Obama on his policy goals. Overall, the video-sharing firm says that 100 hours of video are uploaded to YouTube every minute.

On the company’s 10th birthday, here are 5 facts about YouTube and online video sharing: 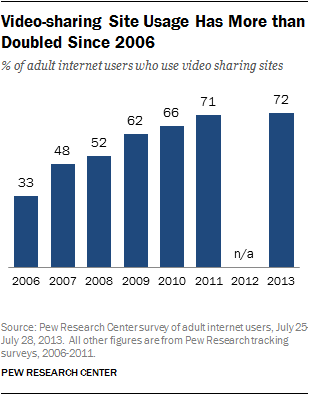 2Animals – especially cats – are popular subjects of videos to post online, as are everyday people and events. Among internet users who posted an original video online in 2013, 45% uploaded their own video of a pet or animal. Some 58% posted a video showing friends and family doing everyday things. Another 56% posted a video of themselves or others doing funny things, while 54% posted a video of an event they attended. But fewer internet users post tutorial videos (30%) or intentionally staged or scripted videos (23%). 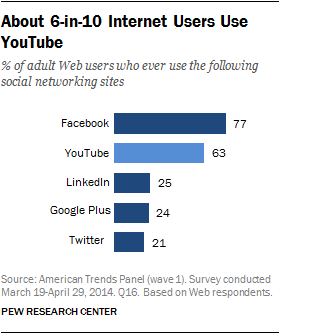 4YouTube is most popular among younger adults, blacks and Hispanics. Like many social networking sites, YouTube is widely used by younger users – 82% of 18- to 29-year-olds used YouTube in 2014, compared with 34% of those 65 and older. Racial and ethnic differences also exist – blacks (76%) and Hispanics (74%) are more likely than whites (57%) to use the video-sharing site.

5Citizens are increasingly using YouTube and other social networking sites to share news-related videos. Twelve percent of social media users have posted their own video of a news event to a social networking site, according to a Pew Research survey from 2014. In addition, from January 2011 to March 2012, Pew Research examined hundreds of the most popular news videos on YouTube and found that close to 40% were produced by non-journalists. Many of these videos chronicled natural disasters or political unrest, like the