As news about Ebola dominates the airwaves and permeates midterm campaigns, Americans are following the ongoing story at historically high rates. About half of U.S. adults (49%) followed Ebola news very closely last week, elevating the story to our list of most-followed events since 2010. 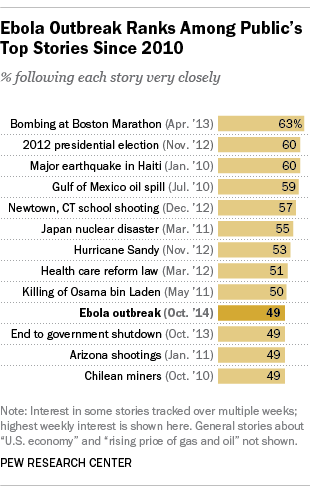 News interest in Ebola has grown substantially from when we first asked about the outbreak in early August. About one-in-four (26%) then said they were closely following news about the Ebola virus, which was limited to cases in Africa at the time.

Looking at other dominant stories this year, 39% very closely followed news about missing Malaysia Airlines Flight 370 in March and 37% closely followed the beginning of airstrikes against ISIS in late September.

Interest in Ebola news spans demographic groups. Adults under 30 typically follow news stories much less closely than older adults, but 37% are closely tuned into Ebola reports (compared with 56% of adults 65 and older). About half of both college graduates and those with less education closely followed Ebola news last week, as did both men and women.

Using another measure to gauge interest in Ebola, a separate survey found that the public’s awareness of the story is also high: 79% say they have read or heard “a lot” about the current outbreak, 19% say “a little,” and just 2% say “nothing at all.”

Stories about health emergencies often captivate the public, although Ebola interest still exceeds that of other recent global outbreaks, such as swine flu (43% at its peak in May 2009), SARS (39% in May 2003) and West Nile virus (34% in September 2002). In the context of post-Sept. 11 bioterrorism concerns, 47% of the public paid close attention to anthrax cases in early November 2001.

By contrast, just 13% this May closely followed news about MERS, the lung disease that was spreading from the Middle East.