While Madison Square Garden’s sold-out shows usually include headliners like Bruce Springsteen, Madonna or Arcade Fire, Sunday’s reception for Indian Prime Minister Narendra Modi is expected to draw an equally massive crowd of nearly 20,000 Indian Americans. Modi’s appearance at the midtown Manhattan entertainment venue is part of his first trip to the U.S. as leader of the world’s largest democracy and comes at a time when people of both countries continue to see each other in a largely positive light.

In India, a majority of the public (55%) has a favorable view of the U. S., including 30% with a very positive outlook, according to a Pew Research survey conducted last spring. Only 16% see the U.S. unfavorably, while 29% offer no opinion. These high ratings are essentially unchanged from late last year, when 56% of the Indian public gave the U.S. positive marks. 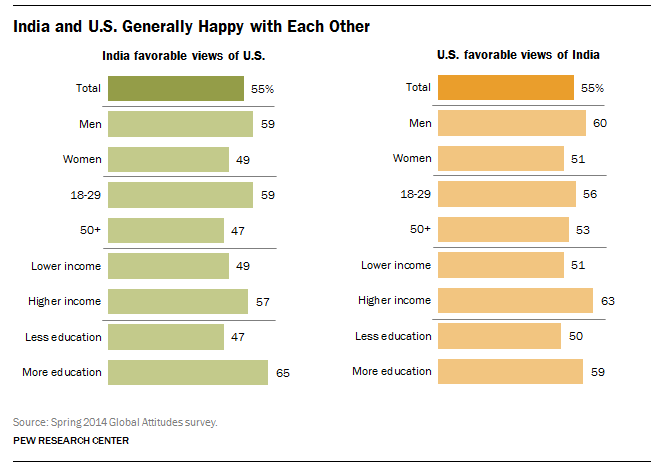 Americans return the positive feelings, with a majority (55%) expressing a favorable assessment of India. This shows little change compared with the last time Americans were asked to rate India in 2009, when 56% saw the emerging Asian power favorably.

As with Indians’ views of the U.S., Americans’ regard for India differs by gender, income and education. Men (60%) and those who are better educated (59%) are more likely than women (51%) and those with less education (50%) to have a favorable view of India. Higher income Americans (63%) also see India more positively, though about half with lower incomes (51%) share this sentiment.

The support that Indians and Americans voice for one another may reflect the ever-increasing importance of the Indian diaspora in the U.S. and its involvement in American politics. The Indian American population now totals over 3 million people, most of whom are highly educated and earn above the median U.S. household income, according to a 2012 Pew Research Center report on the growing number of Asian Americans. Nearly nine-in-ten adult Indian Americans report being foreign-born, and roughly seven-in-ten (69%) have close family still in India. Of those with family remaining in India, about half (49%) still send money back on a regular basis.