Although there has always been a separation of church and state in the U.S., it has never prevented religion and religious groups from playing a big role in the country’s political life. Now, as the nation heads into midterm elections, a new Pew Research Center survey finds that many Americans support a role for religion in the political arena and lament what they see as religion’s declining influence in society.

The survey asked Americans a series of questions about the intersection of faith and public life; here are a few of the key findings: 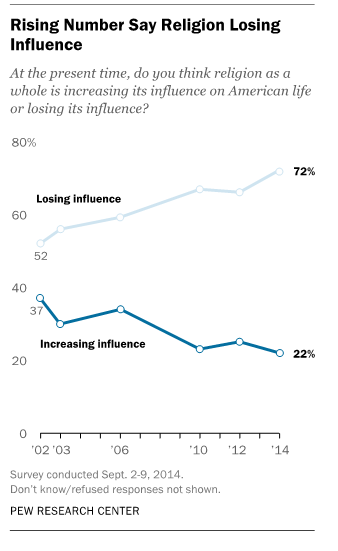 2 Perhaps as a consequence, our survey found a growing share of Americans express support for religion in politics in a few different ways. About half of U.S. adults (49%) say churches and other houses of worship should express their views on social and political questions – up from 43% four years ago. And while they are still a minority, the percentage of Americans who say that churches should endorse candidates in elections is up 8 percentage points since 2010 (from 24% to 32%).

3 Only about half of Americans (47%) see the Republican Party as friendly toward religion, but even fewer (29%) feel that way about the Democratic Party. With regard to the White House in particular, our surveys have found a steady rise in the percentage of people who view the Obama administration as unfriendly toward religion – rising to 29% today compared with 23% in 2012 and 17% in 2009. 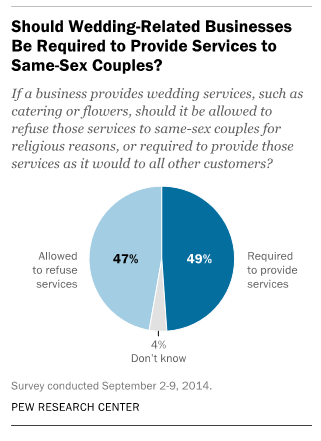 4 For the first time in a Pew Research survey, we asked Americans whether they think businesses that provide wedding services, such as catering or flowers, should be allowed to refuse services to same-sex couples for religious reasons. There was an even split on this question, with 47% saying that businesses should be allowed to refuse services related to same-sex weddings and 49% saying they should be required to provide services as they would to all other customers.

5 Significant shares of Americans who identify with or lean toward one of the major political parties say that their party does not do a good job representing their views on certain issues, including government spending and abortion. This applies especially to the Republican Party. Many white evangelical Republicans say the GOP is too liberal on a host of issues. For example, 34% of white evangelical Republicans say that the GOP has not done a good job representing their views on abortion because the party is too liberal (i.e., not willing enough to put restrictions on abortion). Only 7% of white evangelicals in the GOP say the party has been too conservative on abortion.