Issues at the intersection of religion and politics – including objections to parts of the Affordable Care Act, battles over same-sex marriage laws and a push for new state laws seeking to restrict access to abortions – have been a part of public debate since the 2010 midterm elections. 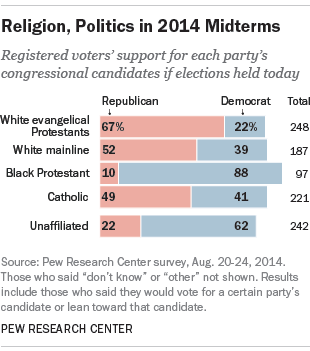 But when it comes to major religious groups’ preferences at the voting booth, there appears to be more stability than change when compared with recent elections, according to a recent Pew Research Center survey.

Among registered voters overall, 47% say that if the congressional elections were being held today, they would vote for (or lean toward) the Democratic Party’s candidate, while 42% would vote for the Republican candidate. (The survey was conducted Aug. 20-24.)