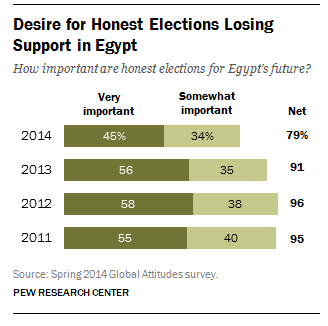 As the polls close in an unexpected third day of voting in the Egyptian presidential elections, there are concerns among Egypt-watchers that a low turnout victory for former general Abdel Fattah El-Sisi would leave the government without a sufficient mandate to deal with the unrest that has rattled the country since the initial 2011 revolution and last year’s military ouster of Mohamed Morsi. And there are signs in our pre-election April survey that the Egyptian public has become wary of politics and is showing a decline in enthusiasm for democracy and democratic values.

One of the key findings from our poll was the overall tepid support for the 2013 military ouster of Morsi and limited support for president-in-waiting Sisi. Only 54% of Egyptians said they favored the military takeover; the same number had a favorable view of Sisi. And while its popularity has declined, 38% of Egyptians still have a favorable impression of the Muslim Brotherhood, which was declared a terrorist organization after last year’s removal of Morsi.

Fewer Egyptians now say that democracy is preferable to any other form of government than in surveys following the Arab Spring, and for the first time, more say that stability is a priority over democracy. While 45% of the population says that honest elections with the choice of at least two political parties are very important for Egypt’s future, that number is down 11 percentage points from 2013.

Egyptians are highly dissatisfied with the direction of their country, with roughly the same level of dissatisfaction as when Mubarak was removed from office in 2011. With Egyptians showing a declining lack of interest in voting, Egypt’s leadership has attempted to drive up turnout via a last minute national holiday, possible enforcement of mandatory voting laws (with a $70 fine), and the extension of voting into a third day. All this adds up to a sense that a promise for a stable and prosperous Egypt, bolstered by democratic legitimacy, might not be achieved with one presidential vote.